One of the interesting angles at Supercomputing 15 was workstations. In a show where high performance computing is paramount, most situations involve an offload of software onto a small cluster or an off-site mega-behemoth funded environment. However there were a few interesting under-the-desk systems offered by system integrators outside the usual Dell/HP/Lenovo conglomerates to tackle the taste buds of workstation aficionados, including high performance computing, networking and visualization.

First is a system that a few of my twitter followers saw - a pre-overclocked box from BOXX. Not only was it odd to see an overclocked system at a supercomputing conference (although some financial environments crave low latency), but here BOXX had pushed it to the near extreme. 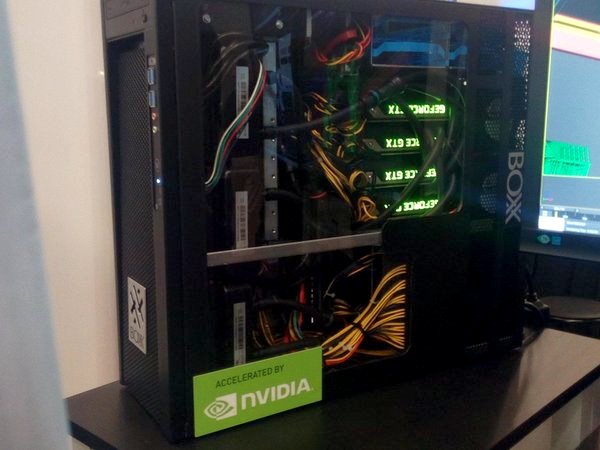 To get more than a few MHz, the system needs to move away from Xeon, which this does, at the expense of ECC memory for the usual reasons. But here is an i7-5960X overclocked to a modest 4.1 GHz, 128GB of DDR4-2800 memory, and four GTX Titan X cards. Each of these cards is overclocked by around 10-15%, and both the CPU and GPUs are water cooled into a massive custom case. The side window panel is optional. Obviously to get the best of everything is still a little out of the reach for PCIe NVMe SSDs as well, but the case offers enough storage capacity for a set of drives in a mix of RAID 0/1/5/10 or JBOD.

They had the system attached to a 2x2 wall of 4K monitors, all performing various 3D graphics and rendering workloads. Of course, the system aims to be a workstation wet dream so the goal here is to show off what Boxx can do with off the shelf parts before going fully custom in that internal water loop. I discussed with the agent about the range of overclocks, and they said it has to balance between speed and repair, such that if a part fails it needs to be a less often as well as quick and easy - hence why the CPU and GPUs were not on the bleeding edge. It makes sense.

Microway also had a beast on show. What actually drew me to Microway in the first place was that they were the first company I saw showing a new Knights Landing (link) motherboard and chip, but right next to it was essentially a proper server in a workstation. 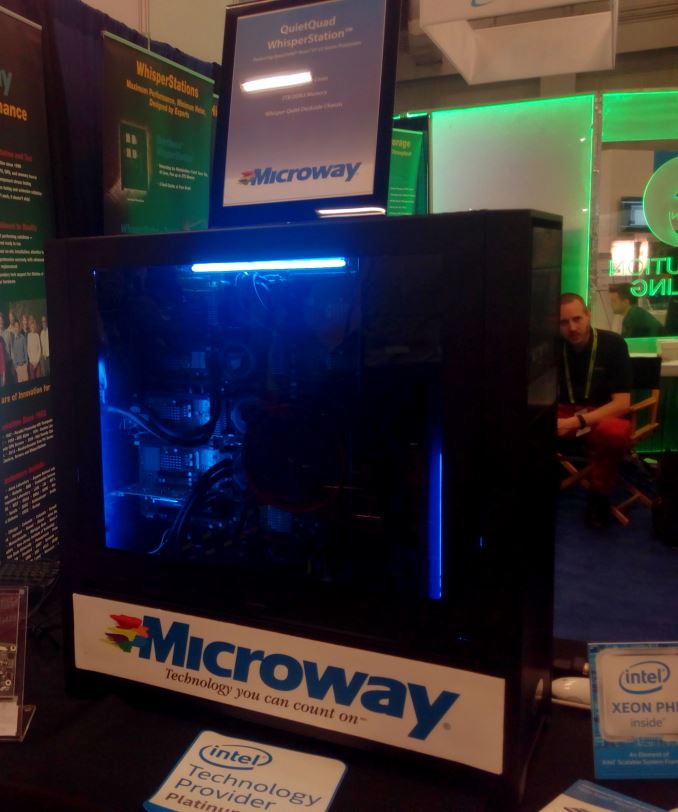 Initially I thought it was an AMD setup, as I had seen quad Magny Cours/Istanbul/Abu Dhabi based systems in workstation like cases before. But no, that is a set of four E5-4600 v3 series CPUs in a SuperMicro motherboard. The motherboard is aimed at servers, but Microway has put it in a case, and each socket has a closed loop liquid cooler. Because these are v3 CPUs, there is scope for up to 72 cores / 144 threads using E7 v3 processors, which is more similar to what you would see in a 4U rack based arrangement. Because this is in a case, and the board arrangement is such, PCIe coprocessor support is varied based in which PCIe root hub it comes from, but I was told that it will be offered with the standard range of PCIe devices as well as Intel's Omni-Path when those cards come to retail. Welcome to the node under the desk. You need a tall desk. I'm reaching out to Microway to get one for review, if only for perverse curiosity into workstation CPU compute power.

So there's one node in a case - how about seven? In collaboration with Intel, International Computer Concepts Inc has developed an 8U half-width chassis that will take any half-width server unit up to a specific length. 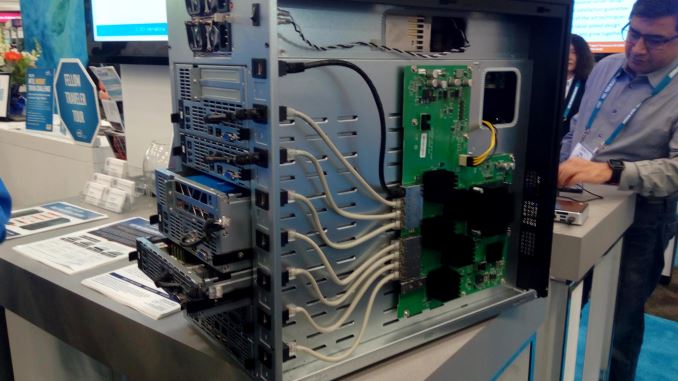 Each 1U has access to a 10GBase-T port and an internal custom 10G switch with either copper or fibre outputs depending on how you order it. In the example show to us, each 1U was supported by dual Xeon D nodes, which will offer up to 64 threads x 16 when fully populated with the next Xeon-D generation. Of course, some parts of the system can be replaced with storage nodes, or full-fat Xeon nodes. Cooling wasn't really discussed here, but I was told that the system should be populated to keep noise in mind - so giving each 1U a pair of GPUs probably isn't a good idea. The system carries it's own power backplane as well with dual redundant supplies up to 1200W if I remember correctly.

With this amount of versatility, particularly when testing for a larger cluster (or even as an SMB deployment), it certainly sounds impressive. I'm pretty sure Ganesh wants one for his NAS testing.