There are a lot of benchmarks available that compare the IBM POWER8 to Xeons. One example is the Enterprise Resource Planning (ERP) software SAP. We have used the Sales & Distribution 2 Tier benchmark many times because it is one of the very few benchmarks that is a very good representation of real world high-end enterprise workloads. 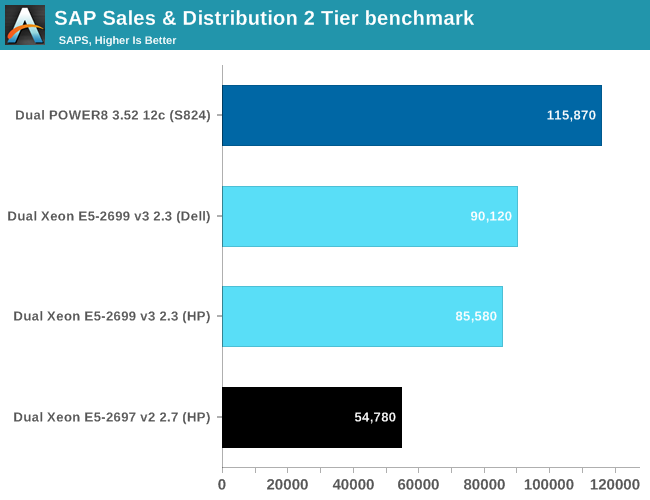 Now combine this with the benchmarks that IBM has compiled on their marketing slides and the fact that we know that the POWER8 chip has a TDP of 190W at nominal speed and 247W when running at "Turbo" clockspeeds. 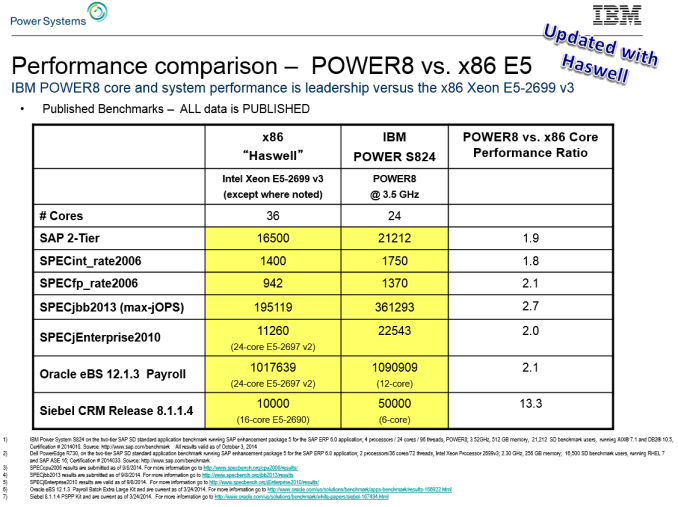 It all seems very simple: the IBM POWER8 is a more power hungry chip but delivers much better performance. But as always you should take the time to read the benchmarks very closely. The IBM S824 is typically the one featured in the benchmarks. However, we are pretty sure that is not the system that will be able to sway the current Intel Xeon customers towards OpenPOWER. Nor are we convinced that the most widely reported benchmarks are accurately predicting the experience of those people.

There are three reasons for that. First of all, most of the benchmarks are run on AIX (7), IBM's own proprietary UNIX. AIX is a high performance, extremely robust OS, but it does not have the rich software system and support that Linux has. Furthermore even with their common design elements, an excellent Linux administrator will have to invest some time to get the same level of expertise in AIX. But more importantly, the S824 is a pretty expensive machine, both in acquisition cost (starting at $21.000, up to $60.000 and more) and energy cost. That kind of pricing lands the system in hostile and more powerful quad Xeon E7 territory.

There is more. Take a look at IBM "Scale-out" server, the more affordable server range of IBM servers. First, a bit of IBM server nomenclature which is actually quite logical and easy to decipher (take note, Intel marketing). 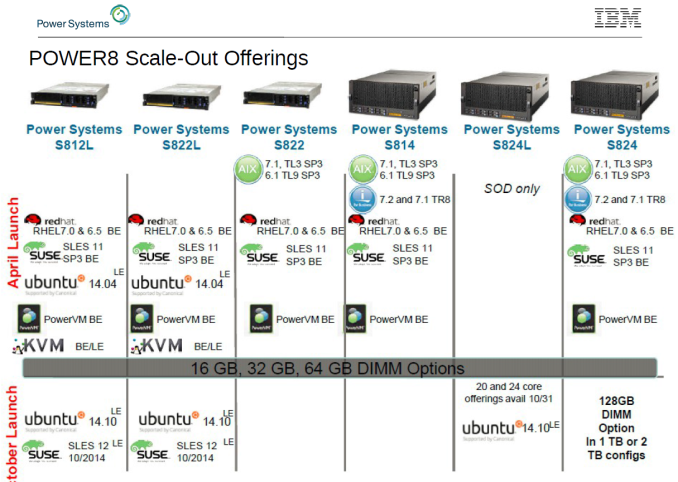 Notice that the non-L versions also support Linux, but a few months ago they supported only the Big Endian (BE) versions (the slide is from the beginning of this year). IBM told us that all POWER8 servers now support both Little Endian (LE) and BE Linux.

This is important since using an LE version (Ubuntu, SUSE) makes data migration from and data sharing (NAS, SAN) with an x86 system much easier, as x86 only supports LE.