Up to recently, all Windows 10 video drivers have been distributed through Windows Update. With the OS still under active development and this specific version of Windows including the greatest overhaul to the OS’s graphics layer since Windows Vista, Microsoft and the GPU vendors have not been taking any chances so far, limiting driver releases to Windows Update. However with Windows 10 getting closer to completion, it looks like that policy is coming to an end this month with the first stand-alone WHQL Win10 driver release from NVIDIA.

At the tail-end of last week NVIDIA released driver version 352.84 for Windows 10, which for the most part is analogous to today’s 352.86 release for Win7/8. 352.84 in turn marks an important stage in the development of Windows 10 display drivers, as it’s the first stand-alone WHQL driver release from NVIDIA. NVIDIA’s only previous stand-alone release was 352.63 Beta (also from the same R352 branch), which came out a couple of weeks ago.

The fact that NVIDIA was proclaiming this as their first WHQL release threw me for a loop at first, but after reaching out I’ve finally been able to piece together a near-complete picture. Throughout the release cycle of WDDM 2.0 drivers for Windows 10, the drivers being distributed through Windows Update were flagged as WHQL certified, including drivers like NVIDIA’s 349.90 release from March. The fact that Windows 10 was already claiming to have WHQL certified drivers made NVIDIA’s announcement very odd, since it would mean that Windows Update has been sending out WHQL’d NVIDIA drivers for months now. 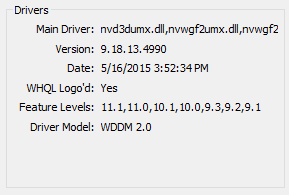 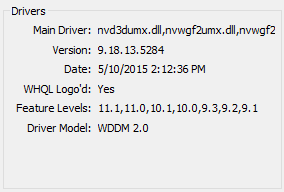 However as it turns out, WHQL flagging on those earlier releases has been for distribution purposes (I suspect Windows isn’t setup to distribute and silently install non-WHQL drivers), and not for certification purposes. From a certification perspective, Microsoft only started accepting drivers for WHQL certification last Friday. So the release of 352.84 really is the first and proper WHQL display driver release for Windows 10, with the WHQL flags on earlier Windows Update releases having essentially been false.

Given the state of Windows 10 development, this makes a great deal more sense, as Microsoft traditionally doesn’t start certifying drivers until close to the OS’s release. And with WHQL certification opened up, this also indicates that Microsoft is looking to release the OS to manufacturing within the next few months, as has been rumored for some time now. But with that said, at this point Windows 10 is still under active development – just go install build 10074 and see for yourself – so while we have our first WHQL display drivers, I wouldn’t pop the cork just yet as there are clearly still some issues in the OS to work out, and I expect the GPU vendors will be chasing obscure WDDM 2.0 bugs for months to come. However for game developers working on the first wave of DirectX 12 games, this should be welcome news as it gives them a better platform to test against.

Meanwhile since this is the first stand-alone WHQL release from Microsoft, we attempted to give these drivers a run on a Fermi card only to find that there’s no Fermi support in these drivers. Since 2014, NVIDIA has run a two-tier development track where Fermi support is disabled in beta drivers, and then enabled in release/WHQL drivers. We had been expecting something similar on the Windows 10 front, however this is not the case, with the current driver set only supporting Kepler and Maxwell. After checking with NVIDIA on the status of Fermi, they’ve told us that Fermi support is still under development and that they are “working hard to bring DirectX 12 driver support to Fermi-based cards as soon as possible.” Given that Fermi is the oldest GPU architecture to support DirectX 12 it’s going to be an interesting test case for the new API, but at the same time I’m not surprised that NVIDIA has focused on Fermi last since Kepler replaced Fermi almost 3 years ago (before Windows 8 was even out). In any case, we should be seeing WDDM 2.0 support for Fermi a bit later this year.

Anyhow, as always you can grab the drivers for all current desktop and mobile NVIDIA GPUs over at NVIDIA’s driver download page.