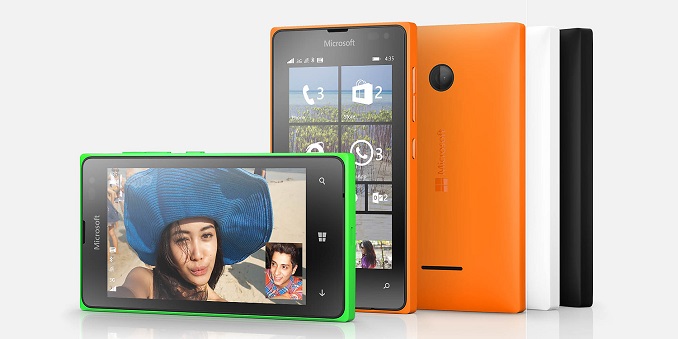 The Lumia brand has a couple of new additions to compliment the already dizzying array of devices launched in the last year. Those waiting for a new flagship to replace the Lumia 930 will have to wait a bit longer though, as this time it is yet another two low cost devices. The feature set of which device has what is getting fairly complicated, and Microsoft does not seem to have a steady progression of features from lower numbered phones to the higher ones anymore, so we will go through these two new devices and see where they fit in the Lumia stack.

The first device is the 4” Lumia 435. This is the first Lumia device with a dual-core processor since the Snapdragon S4 powered devices in 2012/2013. In this case, it is the Snapdragon 200 with dual Cortex A7 processors at 1.2 GHz. The goal of this new device seems to be to hit an even lower price point than the 5xx series of phones, so the even lower powered SoC is not a surprise. Graphics are likely the same as the 5xx series with Adreno 302 to drive the 800x480 display. The 435 does come with 1 GB of memory now, so it appears that at least for Lumia phones, 512 MB options will no longer be released which is a good thing. Storage is 8 GB of NAND, plus microSD expansion up to an additional 128 GB. The camera is especially poor on this phone though, with just a 2 MP fixed focus 1/5 inch sensor with f/2.7 aperture. It does come with a front facing camera, although it is a mere 0.3 MP VGA sensor. Although the battery is small at 1560 mAh, it does have 3.8 V chemistry and a claimed battery life of 9.4 hours of Wi-Fi browsing. The 435 comes in green, orange, white, or black with a MSRP of 69 euros. Availability will be in February in “select” countries in Europe, Asia-Pacific, India, the Middle East, and Africa.

The next variant is the Lumia 532, which also has a 4” display and the same resolution at 800x480. This is a spec bump over the original 530, with the same quad-core Snapdragon 200 (4xCortex A7 @ 1.2 GHz) but with 1 GB of memory and 8 GB of NAND with microSD expansion up to 128 GB. The original 530 came with just 512 MB of RAM and 4 GB of NAND, both of which are fairly inadequate. The 532 comes with a 5.0 MP fixed focus 1/4 inch camera with f/2.4 aperture. The front facing camera is the same 0.3 MP unit as the 435 with VGA resolution video. The interesting thing on the 532 though is the inclusion of the Glance screen, which is easily my favorite feature on Lumia phones, and has been mostly absent from this year’s lineup with just the Lumia 830 sporting glance for any of the phones released in the last year. This makes it an easy win over the Lumia 530. Colors are once again, orange, green, white, and black, and prices start at 79 euros MSRP and similar availability to the 435.

While neither of these phones are especially exciting, Microsoft has clearly seen some traction at the low end of the market and they continue to create devices for each market price and segment they are competing in.

The biggest problem though is that they now have a huge number of devices offered, and unfortunately, a very strange feature list. It seems almost random at this point which phone will have which features, and there is no progression through the product range where lower models are a subset of features of their higher priced brethren. Take for example the Lumia 930, which is the current flagship, but has no Glance screen support, but the Lumia 830 and 532 do have Glance support. The Lumia 730/735 have a higher resolution front facing camera, as does the Lumia 535, but the Lumia 830 has a standard front facing camera. The Lumia 630 is missing things like 1 GB of RAM and an ambient light sensor that less expensive models do have.

While I appreciate that Microsoft is creating models for each market they are going after, they seem to be losing some sort of coherency to their naming standards and feature lists. To avoid customer confusion, this is something that is fairly important.

The Lumia brand is new to Microsoft, so we are not sure which of these models were in the Nokia pipeline and have been altered, so it may take a year or so to sort out the basic feature sets. But for now, it is getting a bit confusing.

For those waiting for a higher end Lumia to finally come out of Microsoft, perhaps we may have to wait for Mobile World Congress to get any ideas about that. Stay tuned!