With dozens of options on the very first screen, the software for the ROCCAT Ryos MK Pro is overwhelming at first, but it is relatively clean and straightforward. From the main screen, you can change the function of the Caps Lock key as well, changing it to the Easy-Shift key, a function that allows some or all of the keys to perform a secondary command. It is very similar to the function of the FN key, but this works for the entire keyboard. The downside is that the Caps Lock key has to be held pressed for this function, making its use in a game quite difficult. You can also perform other basic changes, such as disabling some of the keys, control the "screensaver" effect, and modify the character repeat rates. For the last function, the software provides a test block as well. 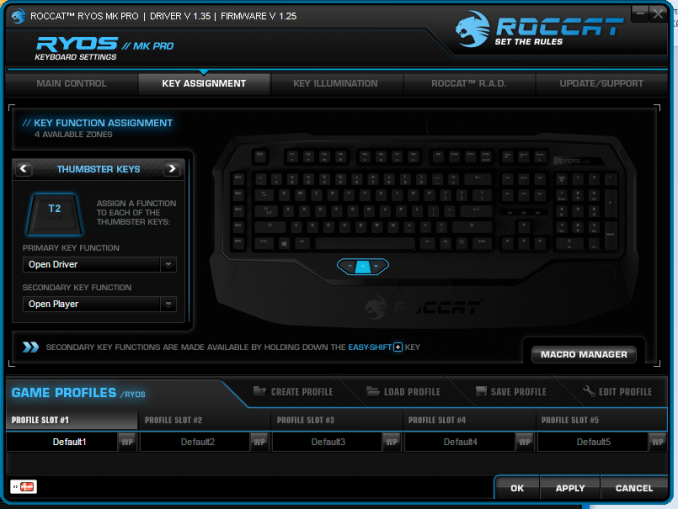 In the key assignment tab, the user can assign the primary and secondary function of every key on the keyboard. There is a built in macro manager for the programming of macros as well. The upside is that there is a very large number of pre-programmed macros for numerous games and applications provided with the software, which might save the user some time. The downside is that the macro recording software is not very sophisticated.

You can edit the delays and add/remove parts of the macro, but you cannot record mouse movements or mouse button clicks. You can manually insert mouse key presses to the macro but there are no options regarding mouse movements or any other special functions at all. Without the ability to include mouse position functions in the macro, the potential of the macro recording software is severely limited and most serious gamers will seek third party macro recorders with compilers, so as to create macros and compile them into executable files that can then be assigned to launch on a key press. Finally, there is a repeat mode, allowing the macro to be executed up to 255 times.

As its name suggests, the key illumination tab allows the user to control the illumination of the keys. Aside from adjusting the brightness and/or turning the lighting of each key on and off, there are advanced options as well. One of them is the ability to adjust the "typing effect", i.e. the effect that will take place whenever any key is pressed. By default, the keys are in "fade" mode, meaning that they will either light up or go dark for a second once pressed. Lighting effects may be programmed and assigned to macros as well.