The higher end segment of the SOHO / SMB NAS market uses Intel's Core-series and Xeon CPUs to deliver the required performance while supporting a large number of drive bays (typically more than 8, in a rackmount form-factor). Over the last four years or so, Intel's play in the other tiers has been mainly with its Atom CPU lineup. Back in 2010, Intel pushed the 45 nm Atom D410 / D510 / D525 for NAS units. In 2012, it was the 32 nm Atoms, the D2550 and D2700. All of these were based on the in-order Bonnell microarchitecture which was fast becoming dated compared to the advancements being made by the ARM SoC vendors. In moving from 32nm to 22nm, Intel completely revamped the microarchitecture for their Atom cores. Bonnell was replaced by Silvermont, bringing out of order execution and other improvements into the picture. Silvermont's applicability to a variety of power profiles meant that there were multiple product lines that ended up using the CPU cores. Bay Trail is proving very effective in tablets and also makes up QNAP's TS-x51 and TS-x53 Pro NAS series. Merrifield and Moorefield are trying to break into smartphones, but it is Avoton and Rangeley that are more relevant to the storage appliances market.

The different product lines integrated different I/O around the Silvermont cores depending on the target market. Avoton is meant for microservers and cloud storage platforms, while Rangeley is meant for communication and network infrastructure. Both of them integrate similar I/O around the cores, but the Rangeley parts have an updated crypto engine. The block diagram of a generic Rangeley part is provided below. 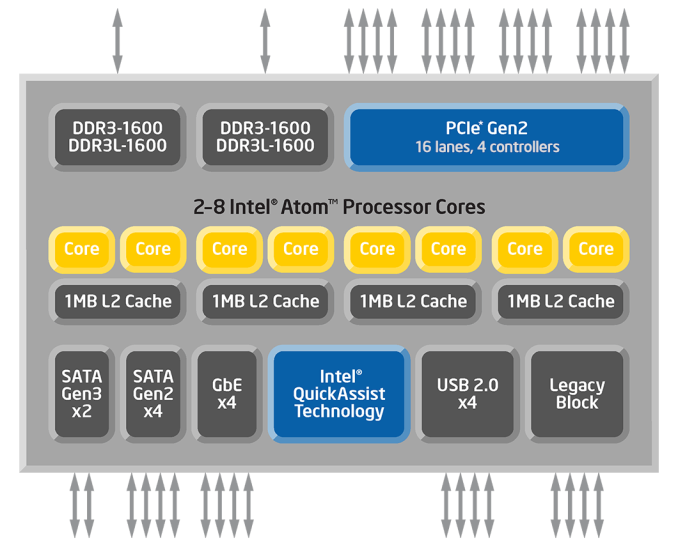 There is a wealth of I/O (2x SATA Gen 3, 4x SATA Gen 2 and up to 16 PCIe 2.0 lanes) for the storage subsystem, and the parts also support up to 4x 2.5 Gbps network links. From the viewpoint of the Synology DS415+, the above block diagram should be considered in the context of the information gleaned via SSH access to the unit. 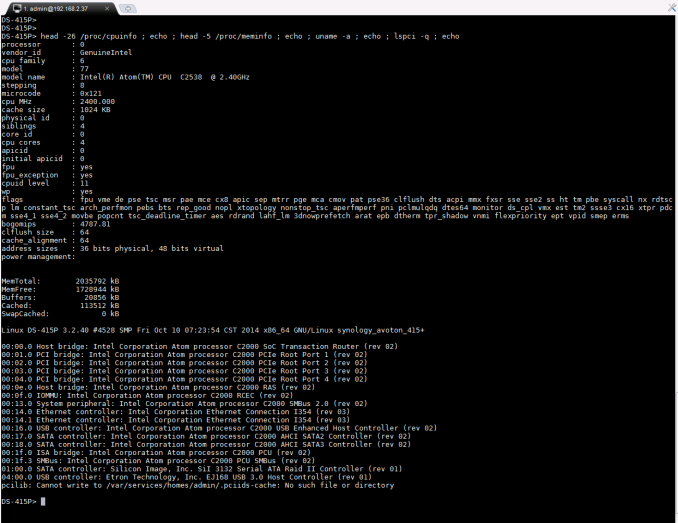 The DS415+ uses the Intel Atom C2538 SoC which has four Silvermont cores running at 2.4 GHz. It is backed up by 2 GB of DRAM. The Atom C2538 has 16 PCIe 2.0 lanes across four controllers. The Silicon Image SiI3132 PCIe to 2-port SATA II host controller uses a single PCIe 2.0 lane on the host side. The device side can support port multipliers. Synology indicates that the eSATA port on the DS415+ can be used to connection an expansion chassis. However, unlike the scalable series, the external chassis can't be used to expand existing volumes in the main unit. The other chip connected to the SoC via PCIe is the Etron EJ168 USB 3.0 host controller. It also uses a single PCIe 2.0 lane on the host side and provides two USB 3.0 ports. These two enable the eSATA and the 2x USB 3.0 ports on the rear of the unit. The single USB 2.0 port in the front comes directly off the Atom C2538. Obviously, in a platform like Intel Rangeley, there is no need for SATA - PCIe bridges.

The more interesting aspect is the two Ethernet controllers. Unlike the Intel I211 GbE controllers in the Seagate NAS Pro 4-bay that we looked at earlier, the Synology DS415+ uses the Intel I354 2.5G Ethernet controllers. Despite being 2.5G-capable, Synology only advertises GbE links [Update: Synology clarified that even though the controllers are rated for 2.5Gbps, the transceivers they are linked to limit the rate to 1 Gbps]. Perhpaps, when the NBASE-T Alliance initiatives take off, we can get official 2.5Gbps ecosystem support from Synology as well as affordable and efficient peripherals. Current 10GBASE-T switches still need some updates to be more power efficient, and adoption is still not high enough to force pricing downwards.

On the software front, the DS415+ runs Linux (kernel version 3.2.4). We have covered DSM 5.0's setup and usage impressions in our recent DS214play and DS414j reviews. There is not much point in rehashing the same excellent setup and usage experience. That said, with the ioSafe 1513+, we also started looking at iSCSI support in NAS units. We will be looking at that aspect in this review also.