Definitely not a reference board

The board SiS supplied us with for testing was far from a conventional reference board. Not only did the board not meet the ATX specification (it is physically too large) but it was definitely not optimized for performance. Before you take that the wrong way, let's explain. 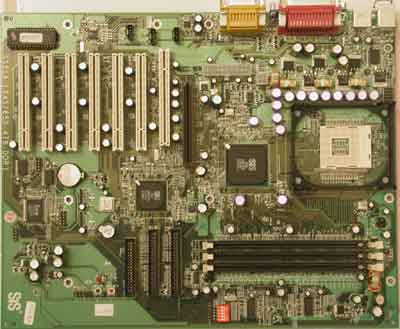 The SiS board pictured above is an internal test board, outfitted with one too many slots to fit in any ATX case. This is mainly so that the engineers can test the board with all 6 PCI master slots as well as the ACR and AGP slots. You'll also notice that the board features three DIMM slots which is very rare when a manufacturer is attempting to tune a board for optimal performance.

Maintaining the highest performing memory timings with three DIMMs on a board is very difficult, which forces most manufacturers to tune for performance by stripping one DIMM off of the board. This is usually acceptable for chipset reference boards, but generally a practice not undertaken by motherboard manufacturers because of a demand for more memory slots. This is also one of the reasons that reference boards generally outperform the first generation of motherboards based on that chipset when they actually hit the streets.

Motherboard manufacturers have expressed quite a bit of interest in the 645 platform and unless VIA can turn things around with Intel soon, you should expect to see (according to SiS) some of the bigger names announce boards this month and ship before year's end. For comparison purposes we used a retail P4X266 motherboard from Shuttle (AV40R) and the i850 based ABIT TH7-II RAID. We used an updated BIOS currently available on ABIT's website for the TH7-II RAID that improved performance of the board a few percent from when we first looked at the board in our Pentium 4 2.0GHz review.

With that said and done, it's time to benchmark…