One of the "features" of the SiS 735 chipset was its single chip design allowing for simplified motherboard layouts. The single chip was home to an integrated North and South Bridge connected by SiS' own Multi Threaded I/O Link (MuTIOL). The 735 chip was very large and the move to a Pentium 4 solution pushed the single chip design to the limits forcing SiS to revert back to a two chip design.

There are no real performance downsides to a two chip design and since motherboard manufacturers are used to producing these types of boards it's really no more difficult for them to adjust to a two chip SiS solution. The single chip design of the 735 was simply an added benefit to manufacturers since they didn't have to layout the traces connecting the North and South Bridges. 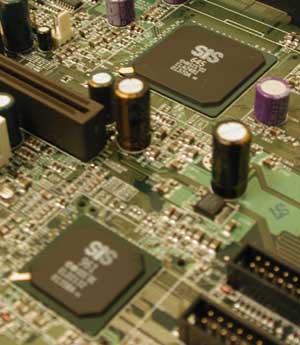 With a 25% increase in clock speed over DDR266 modules, DDR333 offers a proportional increase in memory bandwidth; from 2.1GB/s of DDR266 to 2.7GB/s courtesy of DDR333. There are no differences in the modules themselves; rather the DDR SDRAM chips on the modules have to be certified for operation at 166MHz DDR. In spite of this requirement, you'll find that a lot of the higher quality DDR266 modules will work fine at 166MHz. In our tests, the Crucial DDR266 CL2 modules managed to run at 166MHz CL2.5 just as well as the officially rated DDR333 modules. For our tests we used a DDR333 module from Kingmax. This module makes use of Kingmax's BGA packaged chips.

Taking a page from "How to Make a Successful Chipset 101", the SiS 645 North Bridge is also pin compatible with the forthcoming 650 North Bridge. The only difference being that the 650 North Bridge will feature an integrated SiS 315 video core making it very attractive for OEMs.