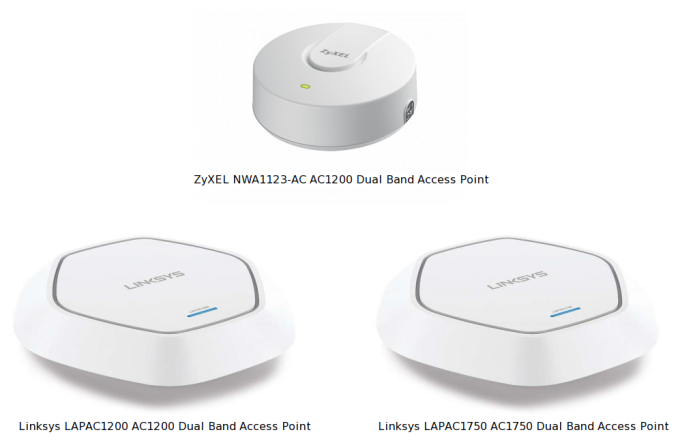 The enterprise Wi-Fi market is a hotly contested one with expensive offerings from companies such as Aruba Networks and Ruckus Wireless being the preferred choice of many IT administrators. Primary requirements for products in this market are the ability to support high client device densities and the provision of a robust and flexible management interface. We covered the launch of the Ubiquiti UniFi 3.0 and Xirrus XR620 earlier this year.

Traditional consumer Wi-Fi vendors have also started targeting offerings towards this expanding market segment recently. Coinciding with Interop 2014, we have Linksys launching two and ZyXEL officially launching one 802.11ac access point targeting business users. The Linksys LAPAC1200 is a 2x2 design, while the LAPAC1750 is a 3x3 one. The ZyXEL NWA1123-AC is a 2x2 design. All three devices are  ceiling-mount units which are dual-band capable and support Power-over-Ethernet (PoE) to eliminate extra power connectors. As applicable to business users, we have support for multiple SSIDs, Layer-2 isolation, specific security features including 802.1X RADIUS authentication, MAC-based ACL etc.

The ZyXEL AP is based on the Qualcomm Atheros AR9342 CPU with a QCA9882 radio. It includes support for transmit beamforming (TxBF) and can have up to 128 wireless clients (64 per radio).

All three devices can operate as either stand-alone APs or repeaters. While the ZyXEL NWA1123-AC retails for a MSRP of $199, the Linksys LAPAC1200 and LAPAC1750 come in at $330 and $380 respectively. Small businesses / SOHO operations looking for a complete system would do well to combine the APs (and any surveillance cameras) with one of the sub-$250 fanless PoE+ switches from either vendor. ZyXEL has the GS1900-8HP GbE 8 Port PoE+ Web Managed Switch while Linksys has the LGS308P 8-Port Smart Gigabit PoE+ Switch in its portfolio. Both of them are fanless and support the latest 802.3at (PoE+) standard with a 70 W power budget.