The Asustor AS-304T comes with a built-in PSU, which reduces the unit's footprint (thanks to the absence of a power brick). The unit maintains the standard industrial design for a 4-bay desktop NAS in the tower form factor, and the choice of materials for the chassis as well as the drive bays is quite acceptable. The front side of the unit has the power button the top and a USB 3.0 slot at the bottom on the left side, while the four bays (and what appears to be a slot for a display) make up the right side. On the rear side of the unit, we have a single 120mm fan , a RJ-45 Ethernet port, and two USB 2.0 ports. Above the USB 2.0 ports, we have a HDMI 1.4a and a USB 3.0 port as well as a 3.5mm audio jack. Note that, unlike the Thecus N2560, we don't have an optical SPDIF port. This shouldn't be taken as a negative, since most multimedia use-cases involve transmitting audio through the HDMI port nowadays.

The block diagram below gives the layout of the Intel CE5335 SoC. Typically, x86 NAS units come with dual network ports (capable of port trunking), but units based on Evansport (such as the AS-304T) don't have that because of the lack of support in the platform. This is acceptable, considering that Evansport is supposed to cater to home consumers who want to use the NAS as a media server. 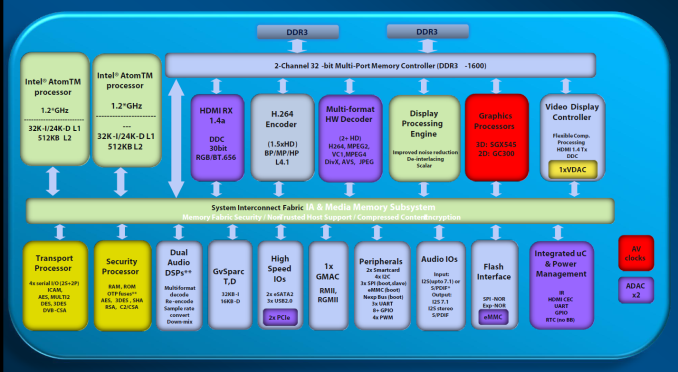 The other important aspect is the available high-speed I/Os. In a NAS platform based on the CE5335, the two SATA ports and two PCIe 2.0 lanes can support up to 4-bays with the help of a SATA - PCIe bridge. There is no native USB 3.0 support in the SoC. Therefore, the AS-304T's USB 3.0 support definitely from a USB 3.0 to PCIe bridge. It can be guaranteed with this information that the platform would not be able to support all the peripherals at full speed because of either the multiplexing of PCIe lanes and / or throttling the connection of the peripheral to the SoC by using lesser number of PCIe lanes than necessary.

One option to determine the components on the board would have been disassembling the unit. Fortunately, Asustor provides SSH access. The screenshot below exposes some of the hardware aspects of the AS-304T. 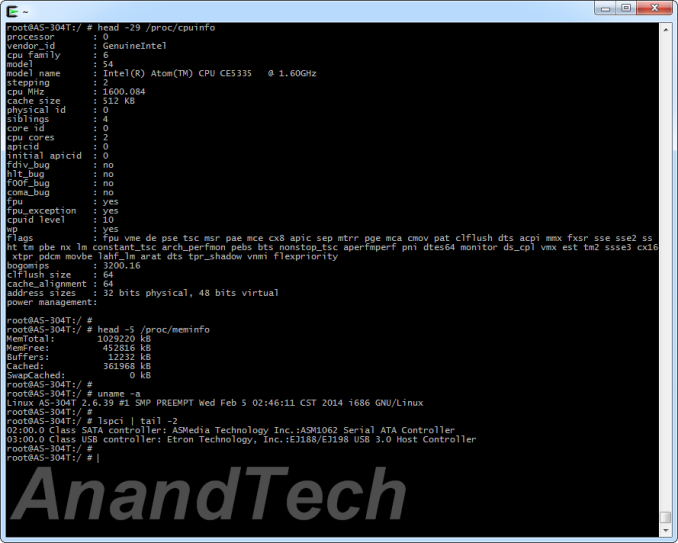 After connection to the network, the unit obtains a DHCP address (even in diskless mode) and could be setup using the web UI at http://<AS-304T-IP>. The setup process is straightforward. At least one of the bays needs to be populated. The firmware (Asustor Data Master - ADM) can either be uploaded from the local disk, or, in the case of an active Internet connection, downloaded directly from Asustor's site. The UI helpfully provides updates on the progress of the process. After a restart, the user is provided with an option to accept default settings (depending on the network and number of initial hard disks) or manually configure all the settings. An option is also provided to register for an Asustor ID (necessary to be able to download apps for the NAS from Asustor's marketplace).

The UI on the AS-304T is reminiscent of operating a mobile device, with apps and links to settings laid out in a grid fashion. The Storage Manager helps configure / migrate / expand RAIDed volumes and set up iSCSI targets. It also handles disk info (S.M.A.R.T). Options are available to create users and user groups for fine-grained access control to shared folders. The services section allows configuration of CIFS, NFS, AFP, FTP and WebDAV.

The App Central section allows users to install apps in addition to those that come pre-installed with ADM. The Backup & Restore section allows configuration of rsync as well as other backup options (FTP, external device, cloud etc.). The 'Cloud Connect' feature allows configuration of access to the NAS from an external network (either through port forwarding or relay access via Asustor's servers). The System Information option's Dr. Asustor feature provides a single interface to maintain the health of the NAS (including network connectivity, firewall configuration, HDD bad block scanning and backup configuration). A very pleasing interface to monitor the resource usage is also available.

In order to use the media-centric features (such as XBMC), it is necessary to enable the 'Media Mode' through the UI. This dedicates a portion of the system memory (around 256MB) to running X-Windows and related apps (including Chrome and XBMC) on a display connected to the HDMI port of the NAS. Asustor also sells a separate IR remote for easy navigation in XBMC. In any case, we found that standard USB HID-compliant input devices (including wireless keyboard/mouse combos) could be used to control the NAS in Media Mode.

Our testing sequence started with the insertion of a single disk and configuring it in JBOD. After adding another disk, we were able to migrate to RAID-1. The data remained online (as expected) during the process. Adding another drive allowed us to migrate to RAID-5. Addition of yet another disk helped in testing out RAID-5 expansion. Throughout all these operations, the NAS kept the data accessible and the processes got done without any hitch. We tested RAID-5 rebuild by yanking out a disk during operation and re-inserting it. The rebuild process was also uneventful. On the whole, we were very satisfied with the unit's handling of storage operations (including handling of disk failures).