Having taken a look at the specifications for the 7990 we can finally dive into the 7990’s features and construction. AMD isn’t going to try to match NVIDIA’s over the top luxury finish for GTX 690 and GTX Titan, but they have still been able to put together a very solid card.

It’s interesting to note that with the 7990 AMD has now cycled through all 3 styles of coolers on their dual-GPU cards. The 5870X2 was a straight-on blower, and the 6990 that followed it was a half-blower that pushed hot air out of both the front and the rear of the card. For the 7990 however AMD has dropped the blowers entirely for a completely open air design.

Traditionally high-end cards have been the domain of blowers due to the amount of heat they put out, but over the last few years open air coolers have been creeping further and further up manufacturers’ product stacks. The tradeoff between the two being that while blowers are self-sustaining and ensure all hot air is expelled by the card – or at least half of the hot air in the case of half-blowers – open air coolers move more of the work to the chassis in exchange for generally lower noise levels. There is no right or wrong way to go about this, but this ends up being quite interesting since this is the first time we’ve seen a reference card over 225W use an open air cooler.

Coming from the 6990, this is probably the most sensible move for AMD to make. The 6990 had a very powerful cooler that unfortunately was also very loud under full load. The 6990 was a bit of an oddity since AMD went out of their way to build in a great deal of overclocking headroom, but they paid with noise. The 7990 in many ways is a reflection and a correction of that, shifting from focusing on overclocking to focusing on noise, and hence the move to an open air cooler.

At the same time this change does mean that the chassis/case used becomes more important than ever. Of the 375W of heat generated by the 7990, only a fraction of it will be kicked out via its vent; the rest will be dumped into the case. Cooling the 7990 in this manner won’t take anything exotic, but an airy case is a must with a top-mounted exhaust being particularly helpful. In a good case the 7990 will have to do very little work on its own, leaving most of the work up to the much larger and quieter 120mm/140mm/240mm fans found on modern cases. 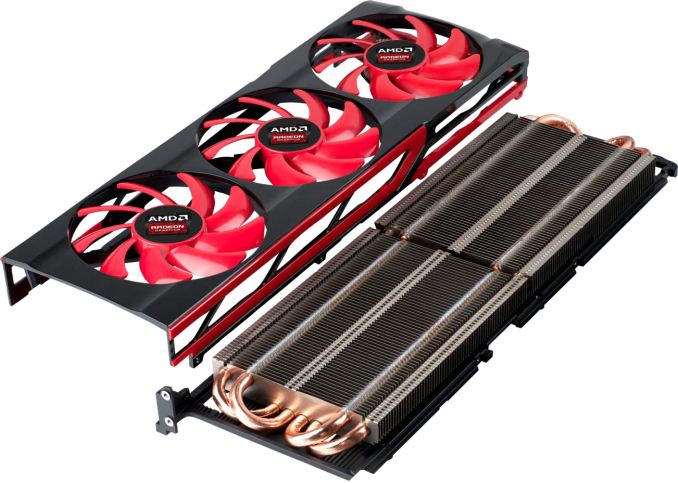 Moving on, as an open air cooler the 7990’s cooling system is ultimately composed of 3 85mm fans positioned over a pair of heatsinks (one for each GPU) that effectively run the length of the card. Around those heatsinks is another grooved heatplate that serves to channel airflow while drawing heat off of the RAM, VRMs, and PLX bridge. If you’ve seen some of our other reviews of high end custom video cards in the past you’ll recognize this kind of setup as being nothing new, but it’s one that has proven very effective. The overall length of the card ends up being 12” (the same as the 6990) giving AMD plenty of room to mount their fans and heatsinks.

Drilling down, we can see the 7990 PCB and components in all of their glory. The two Tahiti GPUs are joined by 3GB of Hynix 6GHz GDDR5 RAM – the other 3GB is on the back – and a PLX PCIe 3.0 bridge that provides connectivity between the GPUs and the PCIe connector. Elsewhere we can see that our earlier hunch was correct and that AMD is using Volterra VRMs throughout the 7990; this replaces the CHiL VRMs found on AMD’s single-GPU 7900 series reference cards. Not seen here is the high performance phase change TIM AMD is once again using for the 7990, so like the 6990 the 7990 is not meant for disassembly unless the cooler is being completely replaced.

As for the back side of the card, backplates are back. The thermal benefits are marginal since GDDR5 doesn’t require much in the way of cooling, but since the 7990 requires at least one slot’s worth of free space for breathing room anyhow, AMD doesn’t need to worry about tightly packed 7990s and can add a backplate to protect the card and make it easier to handle. Looking at the back also gives us a clear view of the card’s BIOS switch. There’s no “AWSUM” mode this time, so the switch just provides a backup BIOS as it does on the other 7900 series cards. Also present are the two 8pin PCIe power sockets necessary to allow the card to pull 375W it needs to operate, along with 1 CrossFire connector to allow the 7990 to be paired with another 7990 for quad-GPU usage.

Coming around to the I/O bracket, AMD has split their slots between ventilation at the top and display outputs at the bottom. The 7990 uses the same output configuration as the 6990: 4 mini-DPs, and 1 DL-DVI port. DL-DVI continues to stubbornly stick around, particularly with the rise of cheap Korean IPS displays, so at nearly $100 for a DP to DL-DVI adapter AMD needs to keep a DVI port. The end result is that the 7990 can still drive 5 displays, so a 5x1 Eyefinity setup can be driven off of the 7990 with no further equipment required. Alternatively, by packing in multiple DisplayPorts AMD can drive multiple 4K displays once DP-equipped variants of those displays start arriving.

Altogether the 7990 is not too different from some of the other large open air cooled cards we’ve seen in the past, which should bode well for AMD given how well these cards work. Though perhaps AMD’s biggest advantage here is that with the greatly reduced power consumption of their 7990 over the earlier unofficial cards, they’re able to pull off in a double-wide card what took PowerColor a triple-wide, and Asus a closed loop water cooled.