It looks like there’s a bit of confusion on some embargo dates, but Origin PC has released some details on their upcoming EON15-S and EON17-S notebooks. The big news is a new GTX 680M GPU based on a higher performing Kepler core. NVIDIA has asked us to hold off on providing the full details of the GTX 680M until the embargo lifts later today, so we’ll just stick to what Origin has disclosed: you get 1344 CUDA cores and 4GB of GDDR5 memory. The new EON models (which are basically customized Clevo builds) also support NVIDIA’s Optimus Technology to give you high performance without necessarily sacrificing battery life. 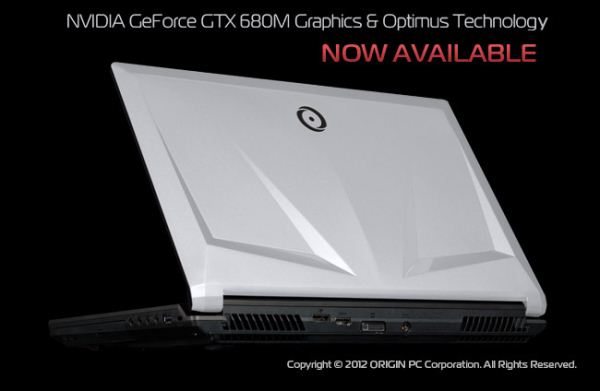 A quick run through of the remaining options shows that both notebooks support 1080p displays (in glossy or matte), have backlit keyboards with three customizable lighting zones, and there are a variety of CPU, graphics, and storage options. Both notebooks feature four SO-DIMM slots with support for up to 32GB (4x8GB) DDR3-1600 memory.

Rounding out the major configurable areas, storage options on the optical drive include the usual trio of DVDRW, Blu-ray combo, and Blu-ray burner—or you can get a hard drive caddy for the optical drive bay (no RAID support). For mass storage, Origin supports 40GB and 80GB Intel 310 series mSATA drives for caching (if you use a mechanical hard drive) or as additional storage. The EON15-S has a single 2.5” drive bay while the EON17-S features two drive bays and RAID 0 or RAID 1 support. Besides 320/500/750GB 7200RPM HDDs and a 1TB 5400RPM HDD, Origin offers 60GB-480GB Corsair Force GT SSDs, 120/240GB Kingston HyperX SSDs, 60-480GB Intel 520 Series SSDs, or 64-512GB Samsung 830 Series SSDs (and the same drive options are available if you get the optical bay caddy).

And as noted above, we’ll have full details on NVIDIA’s GTX 680M later today, so stay tuned.