Though AMD announced the Radeon HD 7800 series nearly two weeks ago, it won’t be until Monday that the cards officially go on sale. While we’re still at work on our full launch article, our first retail card, PowerColor’s PCS+ HD7870, recently arrived and we’ve just finished putting it through its paces.

The PCS+ HD7870 is fairly typical of what will be launching; it’s a factory overclocked card with a heatpipe based open air cooler. PowerColor has pushed the card to 1100MHz core, 4.9GHz memory, representing a 100MHz (10%) overclock and a much more mild 100MHz (2%) memory overclock. Given the very high overclockability we’ve seen in the entire Radeon HD 7000 series, PowerColor is one of the partners looking to take advantage of that headroom to stand out from the pack.

We’ll have the full details on Monday, but for the time being we wanted to share a couple of numbers. 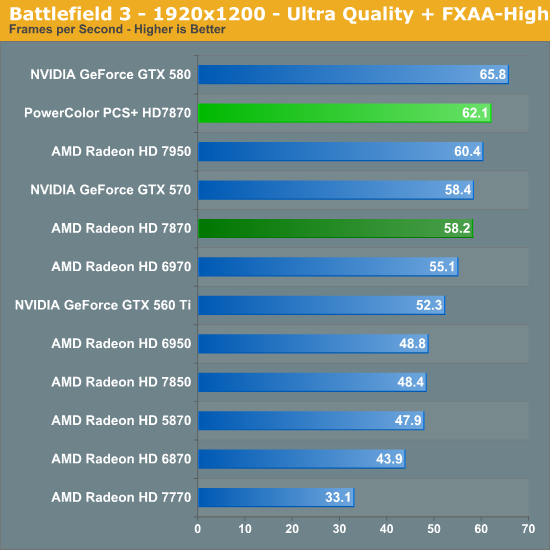 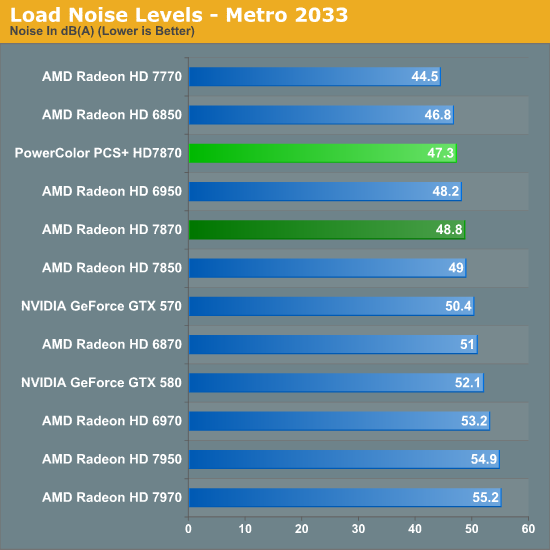 Compared to the reference 7870 The PCS+ HD7870 is faster and quieter at the same time, the latter of which is largely a result of PowerColor using an open air cooler as opposed to a blower as in AMD’s reference design. The 100MHz overclock adds a fair bit of performance to the PCS+ 7870, and for AMD’s partners this is a big deal as allows them to put more space between their factory overclocked models and stock models as compared to the less overclockable 6000 series.

As far as construction goes the PCS+ 7870 is a rather typical semi-custom 7870. PowerColor is using AMD’s PCB along with their own aluminum heatpipe cooler. As we speculated in our 7870 review, partners are using the second DVI header on the PCB, with PowerColor using a stacked DVI design here to offer a second SL-DVI port.

Finally, how’s overclocking? We hit 1150MHz core on our reference 7870. With PowerColor already binning chips for their PCS+ 7870 we landed a chip that could do a full 1200MHz, a full 20% over the reference 7870 and 9% over PowerColor’s factory overclock. And like the reference 7870 this is all on stock voltage – we haven’t even touched overvolting yet.

But what does 1200MHz do for a 7870? For that you’ll just have to check in on Monday when we look at our full collection of retail Radeon HD 7870 cards.