The Rosewill RK-9000 in Action

While the Rosewill RK-9000 may not be much to look at, in practice it's something else entirely. We can break down the usage patterns a keyboard will see into two primary categories: gaming and word processing.

Before we get to that, though, there's an issue that bears mentioning. I've been using the RK-9000 for a touch over a month as my primary keyboard, and while it's a fantastic piece of kit that has made me enjoy working on these reviews for you that much more, I ran into one problem with it: the lettering fading. 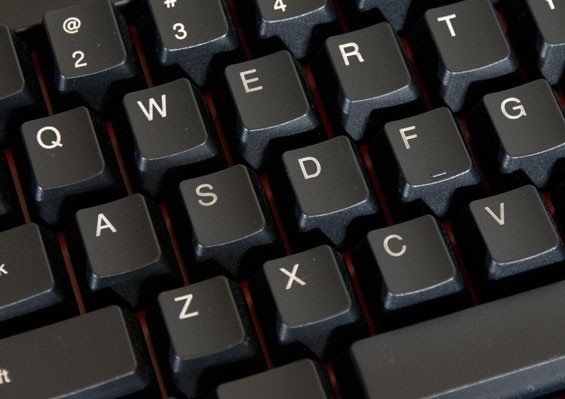 It doesn't show quite as well as I would like in the photo, but take a look at the E, S, D, F, and C keys and you can see they're not as bright as the other keys. This isn't dirt, this is actual wear. And while I do beat my keyboards like they owe me money, this is a bit of a quality issue. Our rep assures me this shouldn't be happening with these keyboards and is sending me a replacement along with getting back to Rosewill's QC, but there's just no way to know if my sample has a problem or if this is going to be pervasive. I'd err on the side of pervasive, honestly, but this is a minor complaint. As long as the keyboard still works (and there's no reason not to think it won't for a long time), the lettering is an aesthetic issue as opposed to a practical one.

Gaming on the Rosewill RK-9000

The Rosewill RK-9000 uses Cherry MX Blue switches, and these switches are incredibly loud and incredibly tactile. Part of the experience is the sheer travel the keys have; if you have a tendency to royally beat up on your keyboard while typing, these switches are going to be fantastic. Unfortunately, during gaming I've found the RK-9000 to be less desirable than a high-end membrane-based keyboard.

The problem with the Cherry MX Blue switches is that everything that makes them fantastic for doing any kind of real writing with makes them poor for gaming. Key travel is pretty deep, making the RK-9000's base model a bad choice for any kind of game that requires multiple rapid keypresses, which is pretty much all of them. I've played many different kinds of games on the RK-9000, and while it hasn't had a drastically negative impact on the experience, it's definitely a step backward from the beat up Microsoft Reclusa I was using beforehand.

Typing noise can be an issue with these switches, too. While I personally love the sound of a good, clicky keyboard, it definitely detracts from the gaming experience. At certain points it may actually be difficult to hear the things you need to hear in a given game over the sound of the keyboard. This isn't a major issue, but it's noticeable.

Typing on the Rosewill RK-9000

While the RK-9000's Cherry MX Blue switches may be far from ideal for gaming, for regular typing they're the best experience I've had in a very long time. Since using the RK-9000, I've found I make far fewer typos than I did on my old Reclusa, and I suspect this is at least partly due to the increased key travel. You have to press the keys a little bit harder to register them than you would with a typical keyboard, which is fine if, like me, you brutalize your keyboards. Yet because of this travel, it's also much harder to fat finger the wrong keys. Spacing between the keycaps is generous yet the keys themselves never feel too small.

As for noise feedback, that's going to be a matter of taste, but personally I feel like I'm actually accomplishing things when I'm using the RK-9000. The clicking switches in the keys sound like work being done to me, in addition to just reminding me when keyboards used to be thick and heavy enough to be used as murder weapons and all the fun I had on my old computer when I was still just learning to be a geek.

Until I've tried the other mechanical switch types, I can say I'd very easily recommend the RK-9000 for anyone who's using their computer primarily or even almost exclusively for heavy duty typing. You might need to consider others near your work space as the clicky noise might be a distraction/annoyance, and there are bound to be some typists that prefer a lighter touch, but if you get a chance to try out a mechanical keyboard the majority of typists will like the experience.