In and Around the BitFenix Outlaw

When you first look at photos of the BitFenix Outlaw, you could be forgiven for thinking the pictures are mirrored. That's not the case, though: the Outlaw uses an inverted design that orients the processor with the bottom of the enclosure and the expansion cards near the top while keeping the power supply mounted below the motherboard. It's an interesting gamble (similar in some ways to BTX), but more on that in a bit.

For the exterior, BitFenix continues to employ their "Soft Touch" plastic, and that plastic goes a long way towards making the case feel more expensive than it really is. It's a fantastic improvement on the more traditionally used garden variety SECC steel or glossy plastic, as it's both aesthetically appealing, nicer to the touch, and at least feels a bit more practical. There are three external 5.25" drive bays with very simple, clean drive shields that pop out in the traditional fashion (pressure from the back), and then the left and right sides of the fascia are ventilated to allow the intake of cool air into the enclosure. BitFenix also smartly places the quad of USB 2.0 ports, audio jacks, and power and reset buttons on the top front of the case. 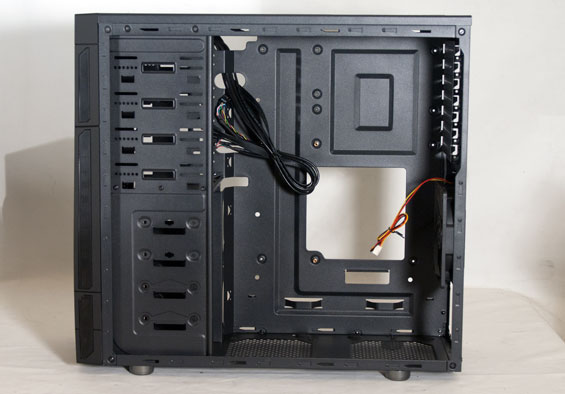 Since the motherboard is inverted in the Outlaw, the left side of the case is flat while the right side is ventilated with space for a pair of intake fans. Meanwhile, the back looks like any modern enclosure, just mirrored, with a single 120mm exhaust fan (the other fans being casualties of the price point). The top has space for two 120mm fans, and there's also room in the bottom for another 120mm fan. Hidden behind the front fascia are also mounts for two more fans. If you're willing to invest just a little, the Outlaw can probably go a long way. 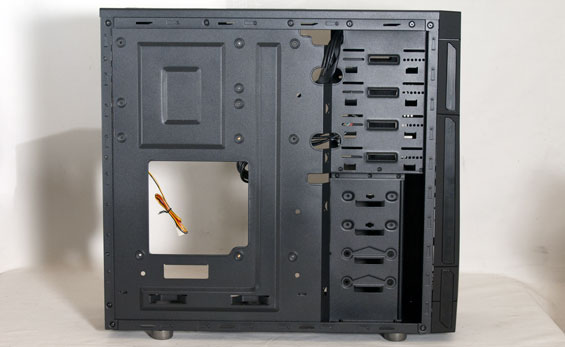 When we pop the Outlaw open, we get a better look at how everything comes together. It reminds me a lot of the interior of the Rosewill Ranger, with the space behind the optical drives and hard drive bays designated for cable management, but BitFenix's design here is much smarter. The hard drive bays aren't oriented laterally, which does complicate matters a little, but in the Outlaw the more old-fashioned front-to-back alignment does make more sense. By doing this and lining the drive bays up against the right panel, there's a substantial amount of space behind the drive cage for stashing cables, and the mounting holes in the motherboard tray and beneath the cage are ideal for it.

I'm honestly quite fond of the Outlaw's design. While the interior feels like one large machined piece of steel, it's organized in a sensible fashion. BitFenix's engineering inside is clean and at least appears to be functional (though we'll have to get to assembly to see for sure). I also just like the aesthetics overall; it's a $50 case, but it's not chintzy looking or gaudy.