The Final Word on Battery Life

In our iPhone 4S review I mentioned that our web browsing battery life tests were in dire need of an update. The move to iOS 5 increased the aggressiveness of browser side caching, which impacted our old tests significantly. We still have plans for a much more significant departure from our existing battery life testing methodology, however as an interim solution I developed a modified version of our traditional smartphone battery life test.

The old web browsing test lacked any significant cache busting features and the HTML workload itself was more representative of mobile sites than a full desktop experience. The modified test does a much better job of not allowing its components to be cached by the browser, and includes both lighter and full desktop websites. Since the workload has changed, these numbers are no longer comparable to those running the older version of our test. The new web browsing test is also stressful enough to span both smartphones and tablets, whereas before we had a separate version just for tablets.

Finally, I must mention that we ensure all tablets tested here are normalized to the same display brightness setting of 200 nits for a true apples to apples comparison. As always we rely on the stock web browser that ships with the platform and manually quit all background tasks before running our tests. In the case of the Transformer Prime, I was able to run our new battery life test using all three power profiles to get a better idea of the range of battery life. As a recap, here are the details on the power profiles.

ASUS and NVIDIA have defined three power profiles on the Prime: Normal, Balanced, and Power Saving. Normal allows the CPU to run at up to 1.4GHz with only a single core active, and 1.3GHz otherwise. Balanced is the default setting and it drops maximum CPU clock to 1.2GHz and favors lower clock/voltage targets on the curve compared to Normal mode. Power Saving caps CPU frequency at 1GHz with 1—2 cores active, 760MHz with 3 cores active and 620MHz with 4 cores active. It's unclear what the impact is on GPU clocks/performance. I've also noticed that the Power Saving profile also enables a dynamic contrast control that you can't override. 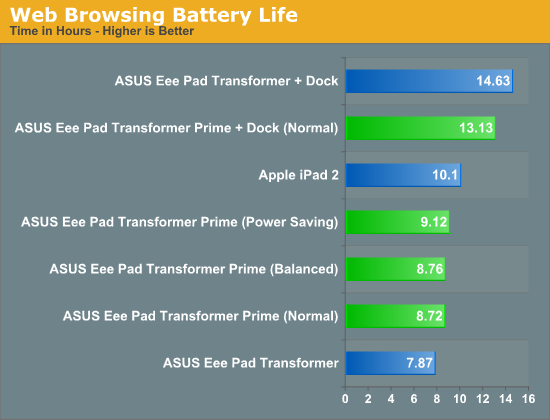 The shipping Prime does much better than the original tablet I reviewed a couple of weeks ago. It's clear that whatever was impacting WiFi performance also took its toll on battery life. What I suspected might be the case ended up being true: the implementation of Tegra 3 in the Transformer Prime delivers better battery life than Tegra 2 in the original Eee Pad Transformer. There are too many variables here for me to attribute the gains to NVIDIA's SoC alone, but seeing as how battery capacity hasn't changed it's likely that we do have Tegra 3 to thank for better battery life in the TF Prime.

Note that even running in Normal mode and allowing all four cores to run at up to 1.3GHz, Tegra 3 is able to post better battery life than Tegra 2. I suspect this is because NVIDIA is able to parallelize some of the web page loading process across all four cores, delivering similar performance to the original Transformer but at lower frequency/voltage settings across all of the cores. Additional performance gained by supporting NEON likely helps improve efficiency, not to mention higher single-threaded performance thanks to Tegra 3's higher clocks. Combine all of this with a more mature 40nm process and a more mature Cortex A9 implementation on that process, and the power improvements make sense.

The Transformer Prime is still unable to dethrone the iPad 2 here, which just goes to show you how efficient Apple's platform was to begin with. That being said, the Prime is within striking distance of Apple's tablet. The race is now close enough where you won't notice too much of a difference between the two. 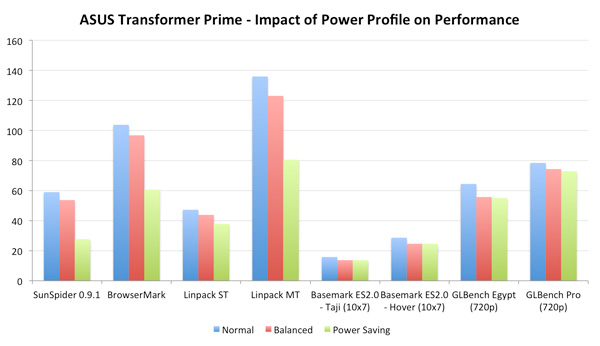 There's also not a huge difference in battery life between the various power profiles. I do applaud ASUS and NVIDIA for giving us control over the CPU governor, but unless you're trying to make the tablet last over a very long flight you're probably fine just leaving it in Normal mode and enjoying the extra performance.

I included results from the Prime running with its dock attached. The additional 22Wh battery improved battery life by 51%. The scaling isn't linear because the dock itself draws power. Once the dock's battery is depleted, the tablet needs to power both itself and the dock. The improvement is tangible though, if you need to do a lot of writing on a flight around the world the dock will help you get there.

Video playback battery life is much better than the original Eee Pad Transformer. Tegra 2 was clearly broken when it came to its video decode abilities and as a result we saw significant limitations on both what video you could play and how long you could play them. Tegra 3 fixes all of that, and the result is battery life that's getting closer to the iPad 2: 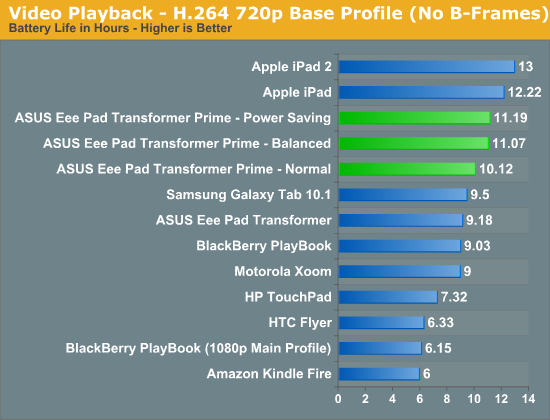 Getting 11 hours of continuous video playback battery life is something to be proud of. Being able to watch 4-6 full length movies on a plane without worrying about your battery is a pretty nice feature. Unlike the active use case, video playback seems to see a bigger benefit from switching away from the Normal power profile.