Performance and Other Notes

I won’t be covering the details of the features and enhancements that version 6 of the BlackBerry OS brings along here because, as you may have guessed, there is nothing new here compared to what was covered in the Torch review. However, one very important point I would like to bring up is the fact that even though the 9780 is not a touch-screen device, BlackBerry OS 6 works absolutely fine with just the optical keypad and soft-keys, all with no drastic change to the UI. Obviously you lose touch-specific forms of interaction such as double tap and pinch-to-zoom, but you don’t really feel like you’re losing out on something here.

Kudos to RIM for building a UI that is quite adept at handling very different UI interaction paradigms without any major change in the UI structure or presentation itself. The achievement is even more praise worthy in light of the fact that Nokia took so long to get their touch interface right with Symbian^3, and even then the experience can be quite inconsistent across different devices and applications running the same OS. 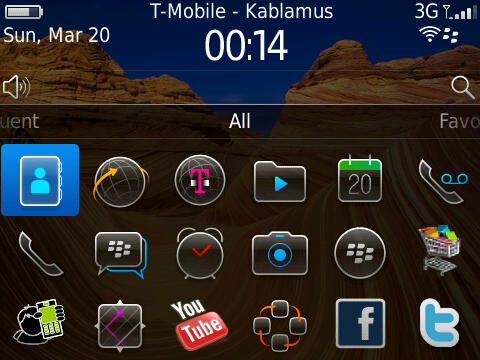 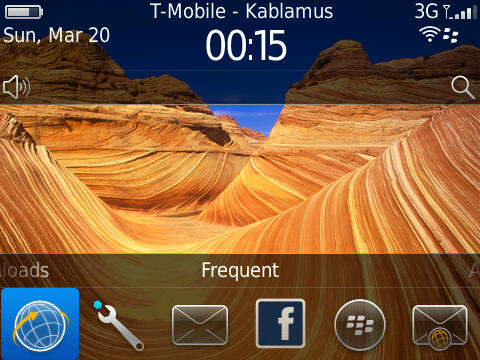 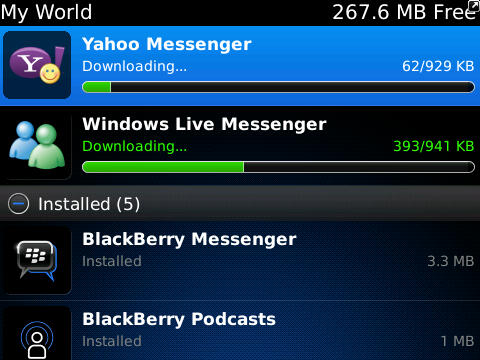 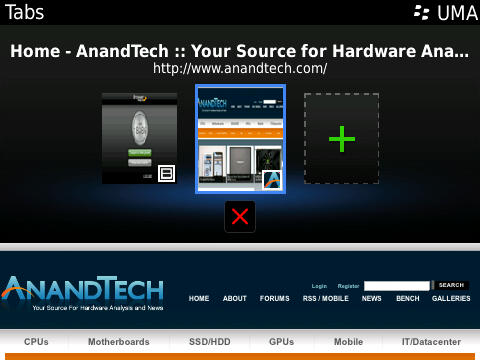 (Clockwise from top-right) The BB OS 6 homescreen, tabs in the browser,
app updates in the BB App World, menu grid.

Another important point I would like to touch on is that RIM seems to be focusing a lot of their efforts on getting the browser working right. Sure, it only has a 2.4” non-touch screen, but the browser itself seems to be quite up to the task. In fact, compared to Brian’s experience with the Torch, the browser experience on the Bold has definitely improved. Pages load quickly and I found no discernible rendering issues, even on fairly complex sites.  I dug a little deeper and found out that the version of the OS that comes bundled with the Bold 9780 (6.0 bundle 863) is newer than the one currently available for the Torch (6.0 bundle 695); it looks like some of the updates have addressed issues that Brian had on his Torch during the review last September.

After I ran some performance numbers (which were better than what the Torch posted), I checked and found out that there was another update available for the Bold (6.0 bundle 1879). I also noticed that with this latest update, the browser version has also changed to 6.0.0.448 vs the 6.0.0.246 found in the Torch. I re-ran the browser tests and found out that the performance had improved further with this new update. I have therefore included numbers from both versions for your reference. Worth noting is that while the update was just 39MB in size, it took about 40 minutes to finish installing. 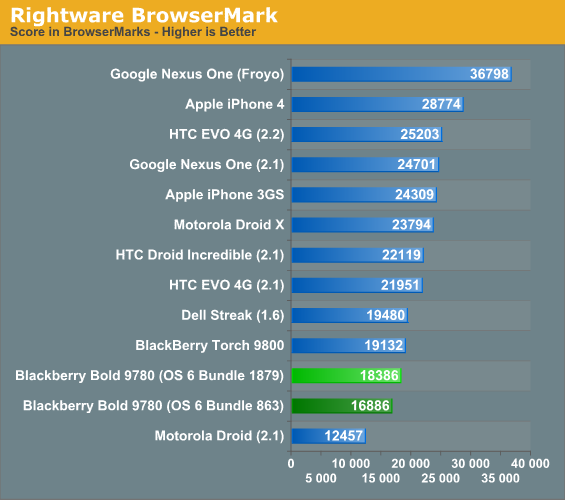 The BrowserMark scores went up by 9% after the update, but interestingly the Torch is still slightly faster (4%). The SunSpider scores on the other hand... nope, that’s not a typo. I re-ran the test 5 times, rebooted the phone thrice, and even reset it once. The fact remained that after the latest update, the time to complete the SunSpider benchmark has decreased by a staggering 54% (i.e. it's more than twice as fast). Even without the update, the Bold already took 13% less time than the Torch, which basically has the exact same hardware specs, so there's plenty of tuning happening in relation to this particular test.

Granted that the numbers posted by just one benchmark don’t tell the entire story, but as I mentioned earlier, the browsing experience on the Bold is limited by the form factor itself, not the browser. It looks like RIM has finally been able to assimilate its acquisition of Torch Mobile and have something to show for it. I did not notice any changes to the UI or new features between the different versions of the browser on the Bold or even between the browsers on the Bold and the Torch. Unfortunately, I triple checked and it looks like the Torch doesn't have this update just yet.