Clearly the one single item that HP focused on (and also wanted us to) was the HP TouchPad tablet. This marks HP/webOS' entry into what is going to be one of the most competitive sectors of 2011, the tablets. Based on my initial impressions and assuming HP makes good use of the time they have till they launch the device in summer, the TouchPad is possibly one of the strongest entrants. Let's get down to the details. 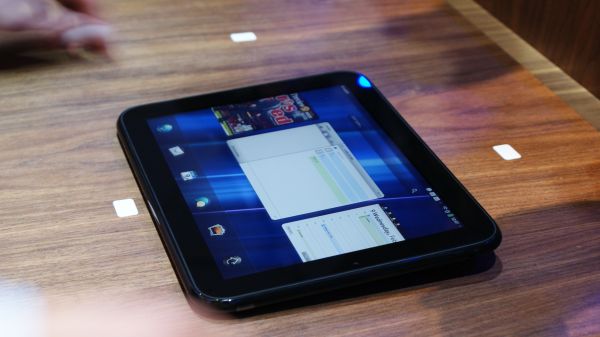 TouchPad is actually going to be a family of webOS tablet devices. Although no other tablet devices were specifically announced, HP did confirm that variations of the current TouchPad (with 3G/4G) and other additions to the TouchPad family will launch sometime in the future. So although the current TouchPad itself is positioned squarely at the Apple iPad, there is no ruling out the possibility that smaller (and possibly larger) tablets will also face some heat from webOS powered devices. 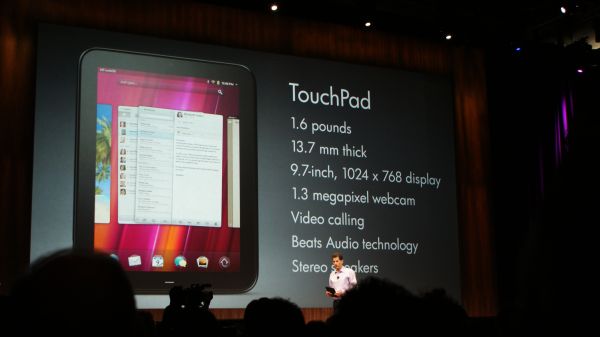 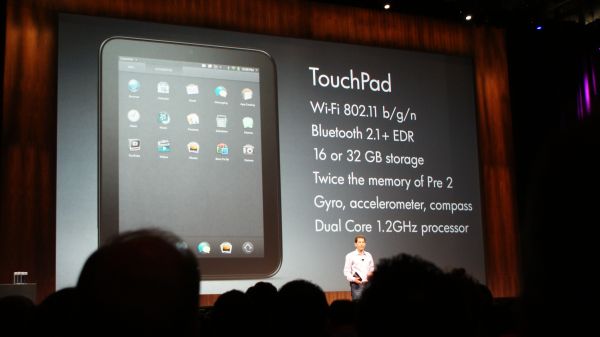 The TouchPad announced today actually runs webOS version 3.0. However, HP did not disclose any further details about 3.0 or what features presented today would be 3.0-only. The focus was the TouchPad itself, which is powered by the Qualcomm Snapdragon 8x60 SoC which consists of a dual-core Scorpion processor humming along at 1.2Ghz. The TouchPad is the first device to make use of Qualcomm's new 8x60 series of Snapdragon SoC's. You can find more details about this SoC on this page but to summarize, this is a 45nm SoC with dual-cores running at 1.2GHz , sharing 512KB of L2 cache and has the new Adreno 220 GPU. The rated power at maximum load for this SoC is about 1.2W and its memory interface supports LP DDR2. As such, the TouchPad comes with 1GB (double that of the Pre 2, and 4 times as much as the iPad) worth of RAM.

What is not clear though is although the TouchPad announced today was WiFi-only, since the SoC does support a cellular baseband (HSPA and/or EV-DO depending on the particular SoC version), will HP expose this functionality via a firmware upgrade (assuming antennas are built-in) or will they release a new SKU with cellular functionality? Either way, the TouchPad will be available in 16GB and 32GB versions and all versions sport 802.11 b/g/n and Bluetooth 2.1+ radios along with a gyroscope, accelerometer and compass. All of this will be packed into a chassis about 13.7mm thick and weighing 1.6 pounds.

Update: Qualcomm has confirmed today that the Snapdragon in the TouchPad is an applications-only SoC without baseband support. Dubbed the APQ8060 (instead of the MSM/QSD prefix for its baseband-equipped SoC's), this gives a much clearer understanding of why the current TouchPad is and will be WiFi only. 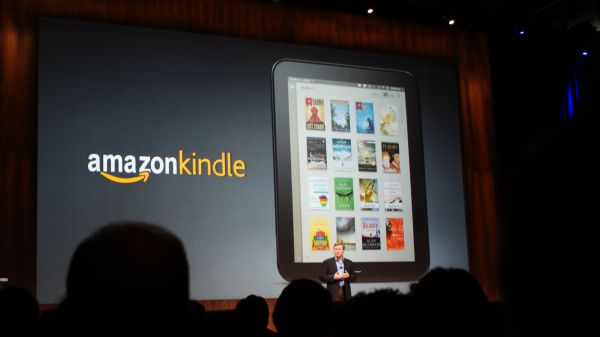 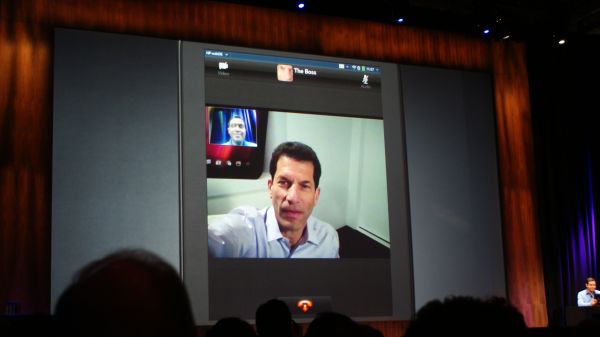 Now, for features of the TouchPad that are visible, it sports a 9.7-inch 1024x768 display (matching the iPad and being bested by the Xoom in terms of pixel density), although it is not clear whether the TouchPad uses an IPS panel. Atop the display is a 1.3MP front-facing camera that can be used for video calls. Unfortunately the TouchPad does not have a rear-facing camera. The TouchPad also houses stereo speakers (with Beats Audio technology...something that was heavily pushed today). Without actually using the device it is difficult to quantify the quality of any of the above, but from the in-person demos, the screen does have pretty good vieweing angles. 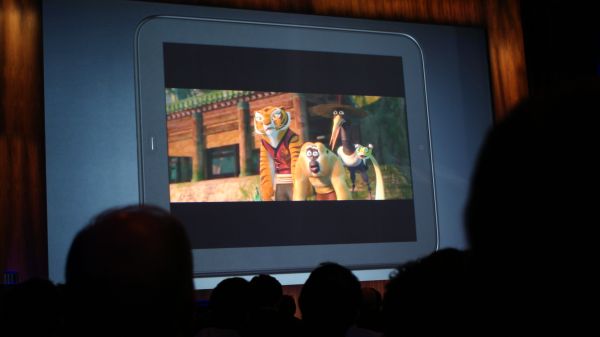 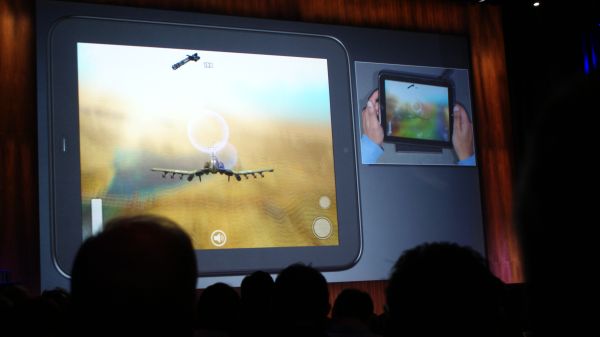 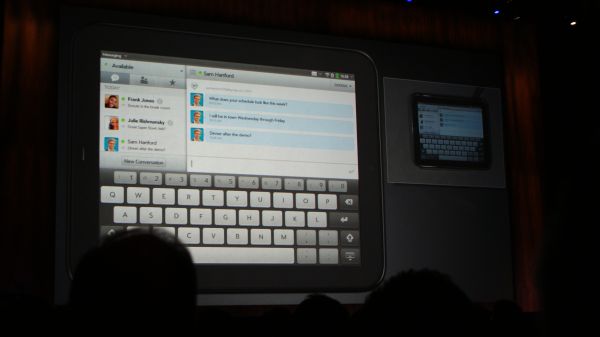 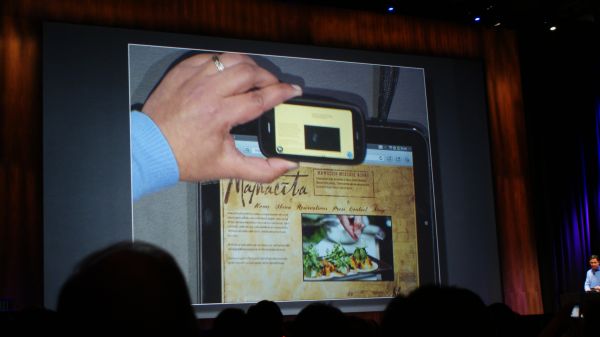 Unlike the Pre 3 that was tagged as a 'professional' device, HP did demo non-professional use cases on the TouchPad by playing an HD Flash video (Kung-Fu Panda), an OpenGL game (Armageddon Squadron 2) and a bunch of Time magazine applications which looked quite impressive. The Flash video played perfectly fine with no skipping or stuttering of any sort. In addition, the game demo was impressive in terms of both the fidelity and performance. It was certainly more impressive than the demos we saw on the Motorola Xoom at the Android 3.0 event.

HP also demonstrated how the TouchPad plays very well with the Pre 3 via the Touch-to-Share feature. Pair the 2 devices via a single button press and from then on, simply 'tap' the Pre 3 onto the TouchPad and the content you were browsing on the tablet now gets transferred to your phone. As shown in the demo, if you were browsing a particular website or reading a particular email on the tablet and you have to rush out without the tablet, just tap the Pre 3 onto the TouchPad and the exact same content is now displayed on the phone. Although I can think of an iOS app that does something along these lines, the functionality and integration shown here is much more straightforward and useful.

And integration is exactly what HP is pushing for with the TouchPad, across the webOS eco-system. Touch-to-Share, wireless printing to almost any HP wireless network printer, deep integration with webservices, all point to how webOS thrives off of connectivity. HP also showed off the improvements made to the email client (multi-select delete...finally!) and how messages received on your Pre 3 can be read and replied-to from the TouchPad.

Given how all the demos on the TouchPad involved working efficiently with multiple apps running in the background, the fact that it is powered by a dual-core CPU should lend itself to such use-cases very well. Since the TouchPad was in fact running a different version of webOS, it is clear that multiple thread scheduling and dispatch capabilities are built into webOS; it's just that HP doesn't feel it is required outside the tablet-space right now (which may also explain why the Veer/Pre 3 have single-core CPUs). 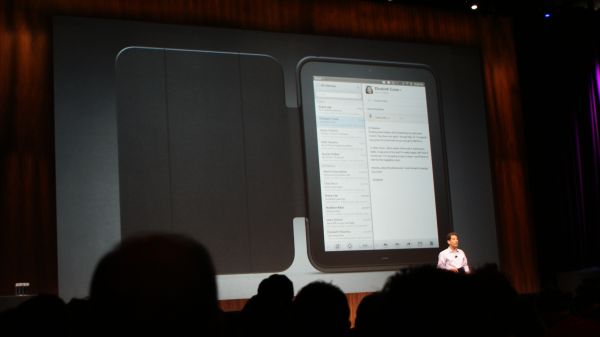 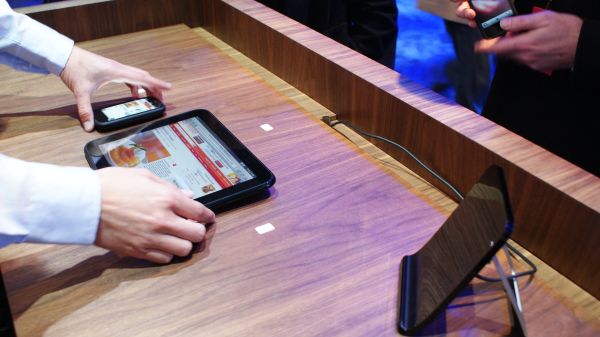 Finally, HP announced that they have collaborated with Amazon and Skype to bring both the Kindle reader and Skype apps to the TouchPad. In addition, they also anounced a bunch of accessories for the TouchPad, including a slick-looking Touchstone charger that doubles as a stand.