The USB 3.0 rear bracket connects in the board to the USB 3.0 header, and stretches across the GPUs and intended for the bracket position between the PCIe slots. The cord is just long enough for this, but this kit will not reach to other bracket positions if you already require that PCI slot between the PCIe slots and both PCIe x16 slots for GPUs.

ASUS have wrapped all their OS features into one overall program, called Ai Suite II. Through this program, you can overclock, auto tune, enable/disable EPU, control the VRMs, control the fans, and update the UEFI. In my experience, it works rather well. 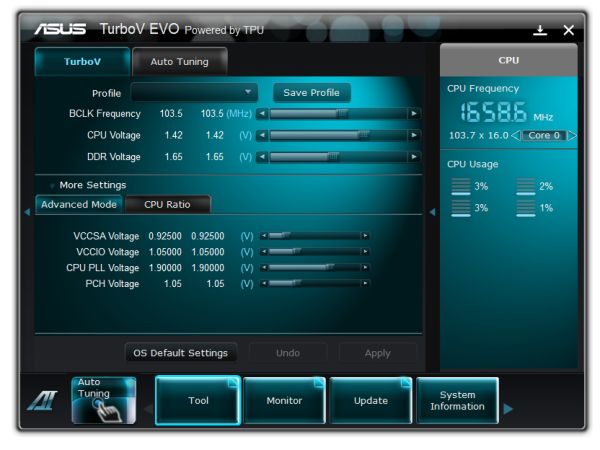 Ai Suite II initially comes up as a toolbar, and selecting one of the buttons creates a popup menu, from which you select the feature you want to use. This is a roundabout way of doing it; I would have preferred a tabbed system personally. The first screen is the TurboV EVO module, the heart of the TPU. On the fly BCLK, voltages, and CPU ratios are applicable here. Increasing various parameters results in them turning yellow, to see that they are all changed, and on clicking apply, all modifications are made. The only downside of this overclocking mode is in the inability to modify the RAM sub-timings on the fly.

The auto-tuning section is a one-button click. The program then restarts the computer, loads into the OS a couple of times, and stability tests the system. I like this feature – the i5-2500K went from 33x multiplier at 100 BCLK to 43x at 103.5 BCLK, giving a total overclock at 4.55 GHz. Every time I used it, it caused at least one blue screen, but as long as I left to its own devices, it provided a suitable overclock. I managed to get a better 24/7 overclock, which I describe in the overclock section, which means the auto-tuning could be considered a little conservative. 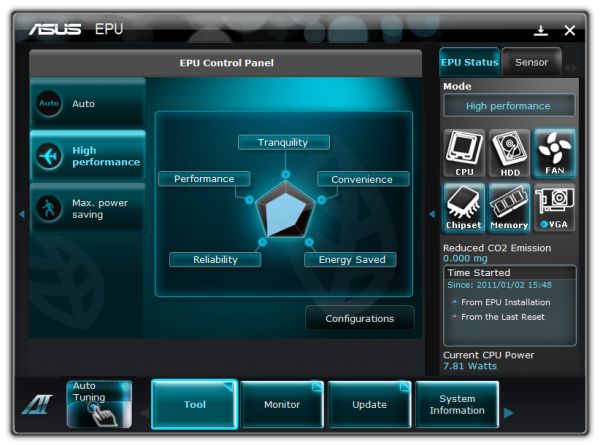 The EPU control panel gives the user greater control over the EPU, in terms of power saving. Alongside the fan controller, the user can adjust the level of power saving in terms of VCore, chipset voltages, HDD spin downs, etc. for when the computer isn’t doing anything too strenuous. 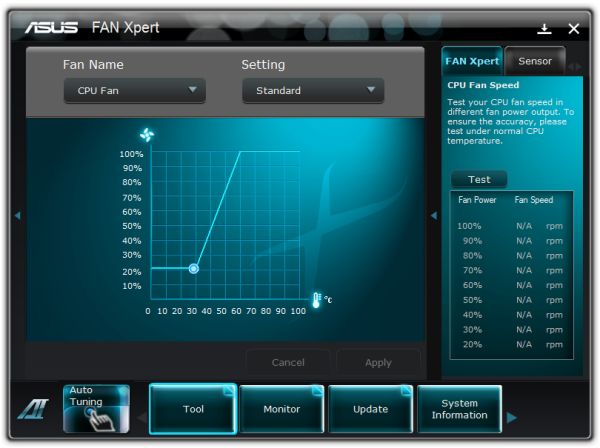 This software also allows complete temperature control of two of the fan headers. As shown below, we can describe the fan power curve against temperature in its entirety, or at preset levels provided by ASUS. 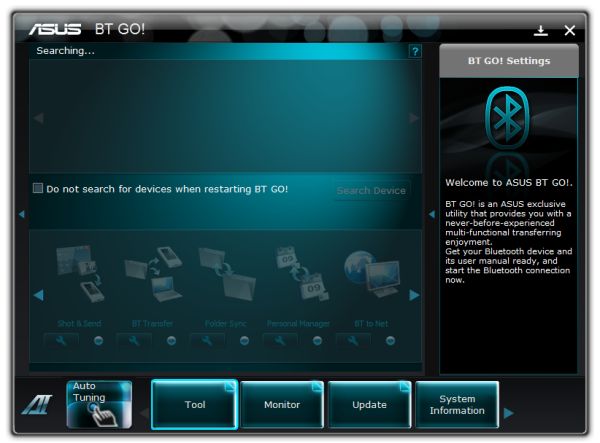 The BT GO! software allows Bluetooth connection with your smartphone (Android, Apple, Windows Mobile, Symbian). If you can download the BT Turbo Remote software from the respective marketplace, you can also overclock via your smartphone – despite being able to connect to BT GO! (and having very little options apart from music control), I was unable to download the BT Turbo Remote software from the Android marketplace. I am currently running a HTC Hero smartphone using a custom ROM to enable Android 2.2 functions. At the time of publication, this program was not available to me on the marketplace.