This was the first year that CES wasn't predominantly a display show. Despite the focus on tablets, smartbooks, netbooks, eReaders and other wireless tech, the display guys were all there in full force.

All of the major TV vendors (LG, Panasonic, Samsung, Sony and Toshiba) held press conferences the day before the show officially opened. We spent the past day looking at all of the TVs and tried to get a feel for what improvements you can expect in 2010. 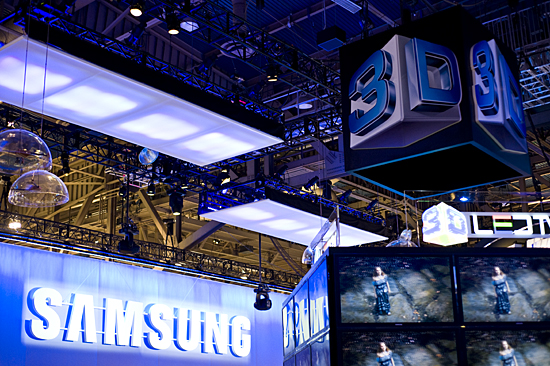 In 2009 we saw the trend moving towards slimmer televisions with the use of LED backlighting. This year however, the hype is all about 3D. Although prototypes of these 3D sets were shown off in previous years, this year we saw a full lineup of 3D home theater solutions from all the major TV manufacturers. In just the past year we saw the release of several blockbuster 3D movies (Avatar, Monsters vs Aliens, Up!) and CE companies are banking on customers wanting the same 3D experience at home. In addition to the the TVs, we'll also see 3D content from providers like DirectTV, ESPN, Fox Sports, and Dreamworks. We'll also see a complimentary lineup of Blu-Ray 3D capable players and HDMI 1.4 to push the content to the screen. 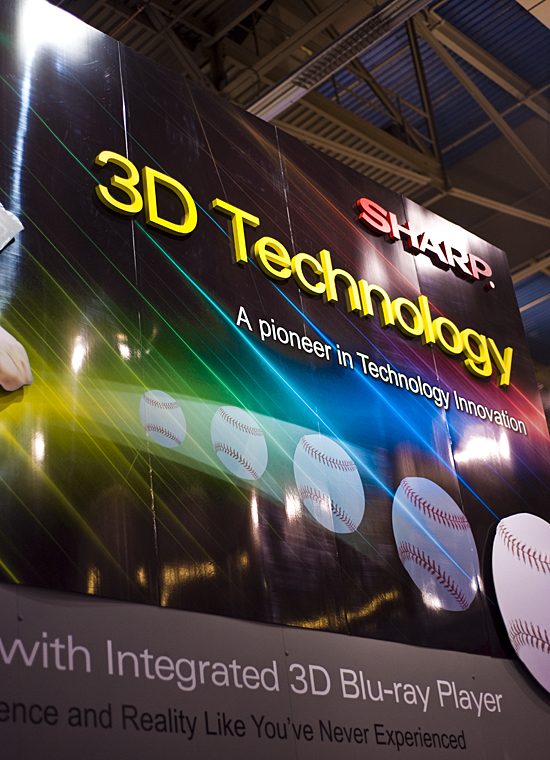 Toshiba, Samsung and Sony are also advertising the ability to convert 2D content into 3D in real time on their respective sets. Each of course claims to have the "best" implementation of this functionality (Toshiba even uses the Cell processor). 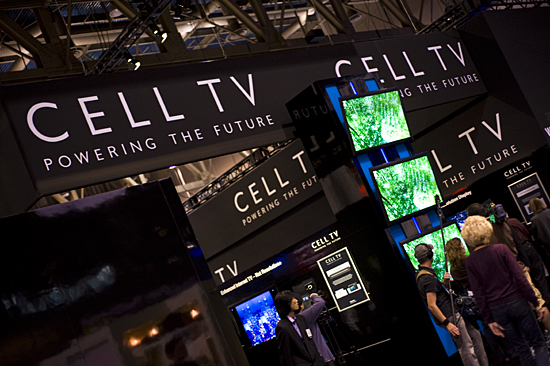 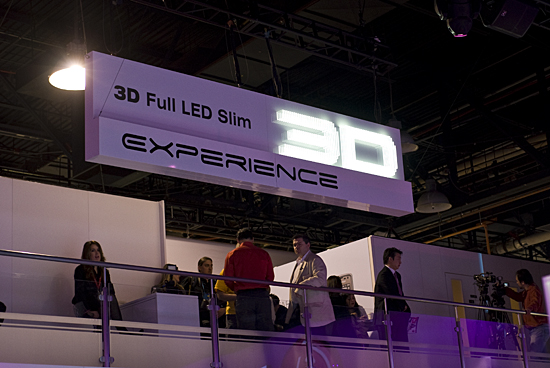 We had a chance to check out some of the 3D offerings on the show floor today to see if these sets lived up to the hype. The implementation of 3D varies slightly between manufacturers however for the most part all the major players are using active-shutter glasses to produce the 3D effect. This is the same technique used by NVIDIA's 3D Vision which we looked at last year .  The glasses are required in order to view the 3D material properly, so if you and your friends want to enjoy a 3D movie, they'll need to each have their own pair of glasses. 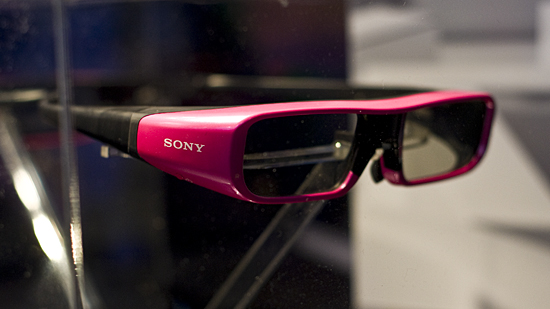 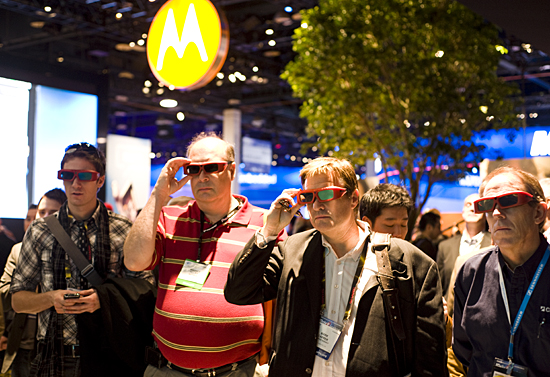 Active-shutter glasses communicate wirelessly to the TV to sync the shutters to the refresh rate of the set. If you have a TV with a 120Hz refresh rate, the TV will display a left or right frame of the stereoscopic image every 1/60th of a second, or at a rate of 60Hz, and your glasses will open the shutter of the corresponding eye. So essentially your 120Hz TV will be able to display 3D content at 60Hz. 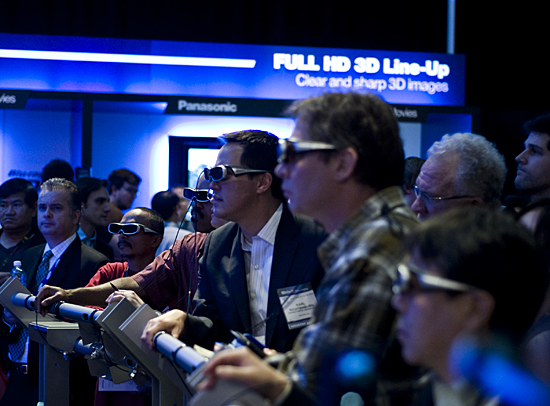 A minimum of a 120Hz refresh rate is needed to ensure flicker-free 3D content delivery. Panasonic seems to going with the bare minimum here however Toshiba and LG are boasting refresh rates as high as 480Hz.

Another difference to note with this year's lineup of 3D devices is HDMI 1.4. This latest HDMI standard includes official support for stereoscopic 3D formats, however existing high speed HDMI 1.3 interfaces can also be used for 3D.

In our short time viewing the demonstrations on the show floor, we can say that the experience of 3D in the home is very similar to what you get at your local cinema, albeit on a smaller scale. Right now the price premium for 3D doesn't justify the experience, but perhaps that will change over time. Hopefully we will see more content that will push this technology artistically. 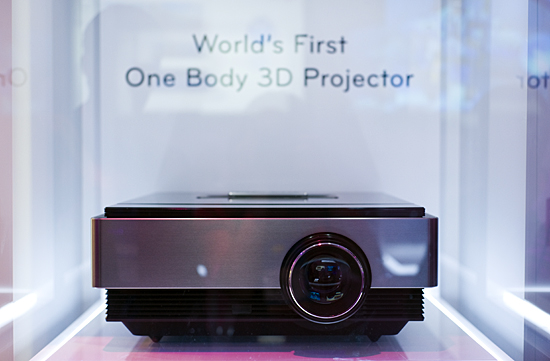 Another common theme for TV's this year was the broadening lineup of LED TVs. Although LED TV's have been selling for a few years now, the choices for these desirable sets have been slim and pricing was set at a premium. Expect the variety of LED based TVs to increase significantly for 2010. Of the 10 new Toshiba TV series' announced at the show, 7 will be LED. The LED sets also continue to get thinner as well with Samsung boasting that their LED9000 series set is 0.3" thick. LG takes the crown in being the "worlds slimmest" LED backlit LCD TV at 6.9mm (0.27") thick. In either case, they both look very slick with the LG set winning our approval for most elegant design. Sony however couldn't keep up in the thin race this year as all their LED backlit sets were noticeably thicker than the competition. Their "monolithic" design branding doesn't help invoke a feeling of thinness either. 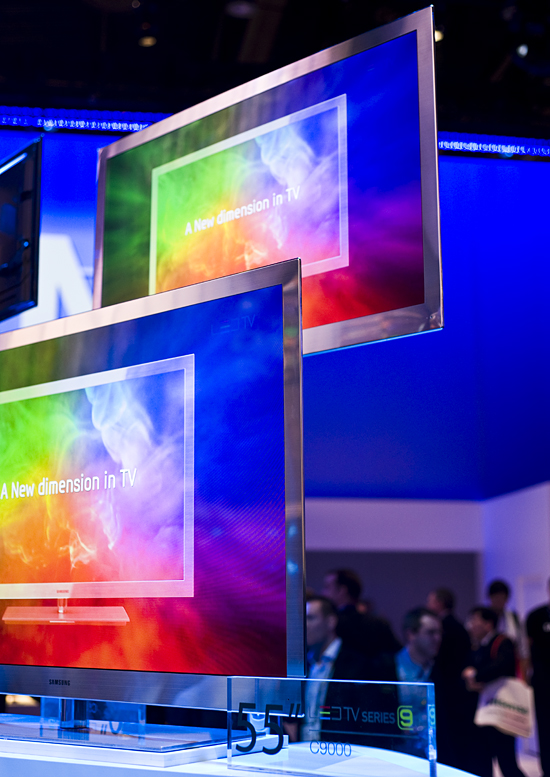 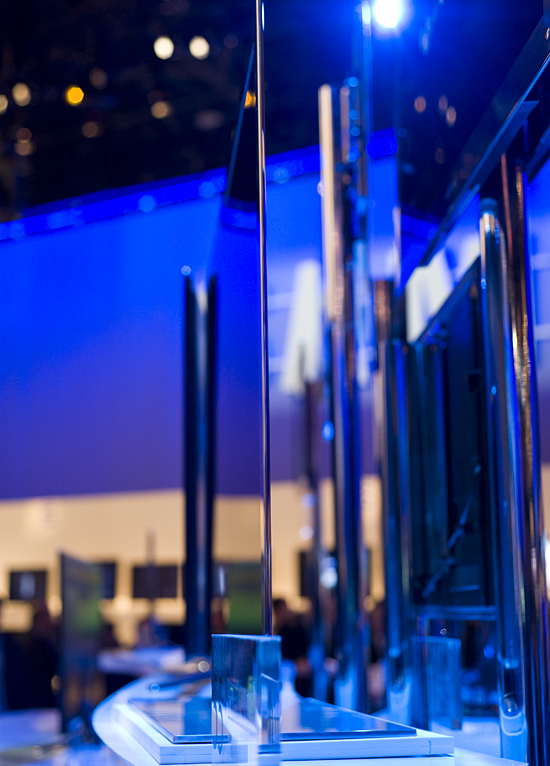 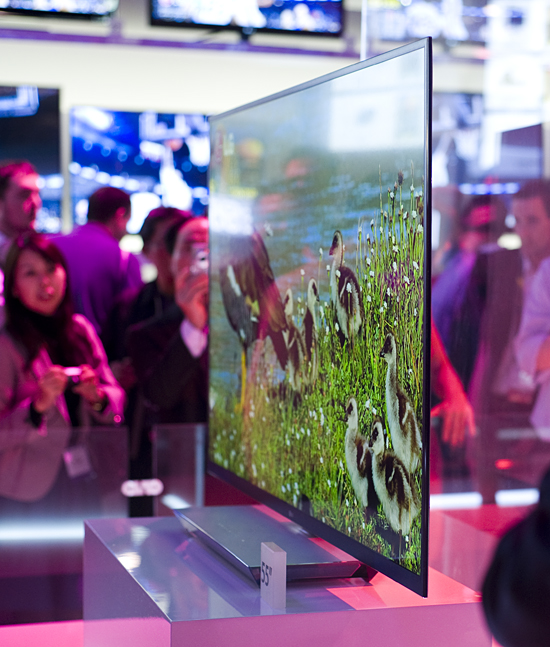 The ultra-thin TVs are arguably more interesting visually than 3D content displayed on them. It won't be too much longer before these things are light enough to hang directly on a wall or with minimal mounting hardware.

Finally this year saw a growing trend in "connected" TVs. These sets will integrate ethernet and wireless network capabilities to stream content from external devices and the internet. All the major brands were touting DLNA certified models that can view movies, music, and pictures stored on a network device directly on the TV.  Samsung has upped the ante here by allowing their premium line of LED TVs (6000, 7000, 8000, and 9000 series) to run 3rd party apps. Samsung is calling their foray into an Apple-like app store "Samsung Apps" which expands on their Internet@TV service launched last year.

Companies like Samsung are moving in the right direction in terms of connected home entertainment with DLNA, however it still has a ways to go before it matures.  If you already have a nice TV, it's not worth upgrading just for DLNA. Set top devices like the Popbox and the Boxee already provide the ability to stream almost any type of media to your TV in addition to streaming content like Netflix and Hulu. 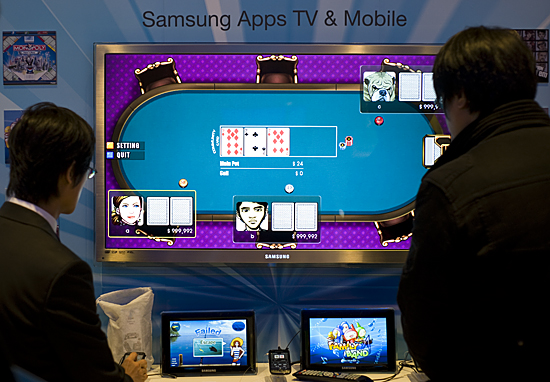