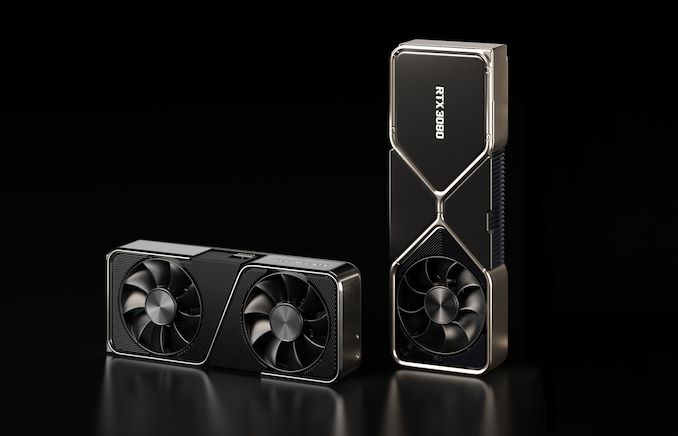 Continuing their ongoing efforts to limit the Ethereum mining performance of their GeForce video cards – and thus make them less enticing for miners – NVIDIA today has announced that they are bringing their cryptocurrency hash limiter to additional GeForce cards. Already a fixture on the vanilla GeForce RTX 3060 since it’s launch, NVIDIA has begun incorporating their hash limiting technology and its associated security stack into newly manufacture red GeForce RTX 3080, 3070, and 3060 Ti cards. The new cards will appear on shelves later this month, and will carry the “LHR” branding to differentiate themselves from the first-generation, unthrottled cards.

We’ve been covering the ongoing matter of NVIDIA and Ethereum mining for several months now, as the company has worked to deal with the unexpected (and largely unmanageable) surge in video card demand that has come as the price of Ethereum tokens has exploded. Even with the cryptocurrency down almost 20% in a week, Ethereum mining is still quite profitable on NVIDIA cards. Which in turn has contributed to an unprecedented and sustained spike in demand for video cards that NVIDIA (and AMD) are unable to meet.

In order to make their cards less useful to miners – and to try to shift shipments back to gaming customers – NVIDIA began rolling out an Ethereum hash limiter, starting with their GeForce RTX 3060 card back in February. NVIDIA’s hash limiter throttles a card’s Ethereum mining performance to 50% of its native rate, reducing (though not eliminating) a card’s usefulness and profitability for mining. Overall, this initial rollout did not go quite as planned thanks to an unforced error on NVIDIA’s part that partially disabled the throttle. But it clearly has not deterred NVIDIA as they have continued to refine their hash limiter and, now, are expanding it to other cards.

To that end, NVIDIA is adding the hash limiter to new GeForce RTX 3080, 3070, and 3060 Ti cards. As always, the company isn’t sharing much in the way of technical details, but it looks like this is the same hash limiter that is going into revised GeForce RTX 3060 cards, which began shipping in the middle of this month. Key among that technology is an updated vBIOS that requires a minimum driver version – 466.71 in the case of hash-limited 3080/3070/3060Ti cards – preventing their use with older drivers that lack throttling capabilities. Through the combination of the revised vBIOS and drivers, NVIDIA in turn is able to detect and limit the Ethereum hashing performance of these new cards.

*RTX 3060 shipped with an earlier version of NVIDIA's hash limiter

Meanwhile, these new cards will be receiving additional labeling to differentiate them from the original generation of unthrottled cards. Calling this throttling feature “Lite Hash Rate”, or “LHR”, according to NVIDIA there will be LHR branding/information put on the relevant product boxes as well as on retail websites. Ostensibly, this is to communicate to buyers that the cards are hash-limited, but at the same time it’s likely that this branding is required for legal reasons as well, as NVIDIA is introducing an additional limitation that was not present on the original generation of cards.

This is a slightly different branding strategy from how they’ve handled the RTX 3060, owing in large part to the RTX 3060 shipping with a hash limiter from day one. In the case of the RTX 3060, even when NVIDIA began shipping revised cards earlier this month no branding changes were needed, and few (if any) RTX 3060 cards mention being hash rate limited. With that said, we’ve already seen Gigabyte accidentally publish and then pull RTX 3060 product pages that mention LHR as well, so we may see NVIDIA’s board partners use the LHR branding across their entire GeForce product lines in order to be consistent.

Ethereum performance aside, NVIDIA says that the upcoming LHR GeForce cards are functionally identical to the original generation GeForce 30 series cards as far as compute and gaming performance go. For our part, we have not seen the Ethereum throttle trigger in other use cases on the RTX 3060, so we’re not expecting different behavior on the more powerful GeForce cards. For better or worse, Ethereum has a very distinct workload (memory bandwidth bound and comprised almost entirely of random-access operations), so it’s rather easy to tell apart from games and even other compute workloads.

Finally, the GeForce RTX 3090, NVIDIA’s flagship GeForce 30-series card, will be the odd man out as far as the LHR changes go. NVIDIA is not issuing an LHR version of that card, owing to the fact that the $1500 MSRP card’s rate of return isn’t nearly as high as the likes of the RTX 3080 and RTX 3060 Ti, making it relatively less popular with miners.

As with the launch of throttled RTX 3060 cards, NVIDIA says that they are doing this to better ensure that GeForce cards make it to gamers, as opposed to being conscripted into mining farms. Overall, this is part of a larger overall NVIDIA strategy to respond to the rise of Ethereum and the resulting crush of demand in the short term and the long term. Ideally, NVIDIA would like to shift Ethereum miners over to their CMP series of dedicated mining cards, which fetch higher prices don’t (directly) compete with GeForce cards. Meanwhile, reducing the number of GeForce cards going into mining means those cards don’t boomerang back on to the second-hard market once the Ethereum mining bubble does pop, thereby avoiding the kind of supply glut that lead to the crypto-hangover of 2018.

Wrapping things up, the revised LHR GeForce 30-series cards are already in production, and will begin shipping to retailers later this month. Given how quickly video cards of all flavors have been selling, the remaining unthrottled cards should quickly sell out. At which point we expect that NVIDIA’s anti-Ethereum measures will truly be put to the test, as miners will be facing their own supply shortages.