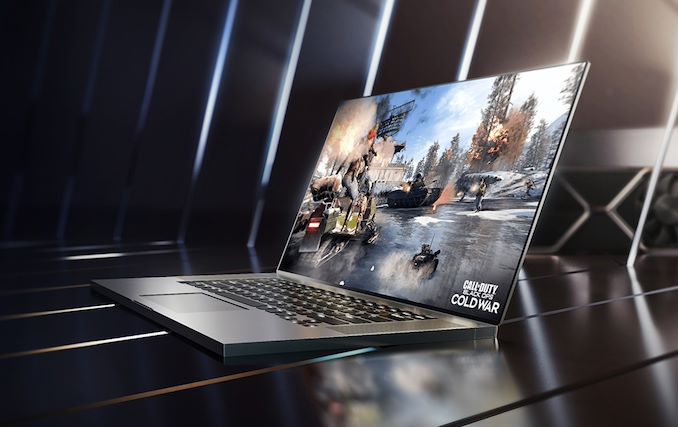 Coinciding with today’s launch of Intel’s Tiger Lake-H CPUs for high performance laptops, NVIDIA is also using the occasion to launch their latest lineup of laptop video cards, the GeForce RTX 3050 and RTX 3050 Ti For Laptops. Based on NVIDIA’s newest and smallest Ampere GPU, GA107, the RTX 3050 series finally rounds out the rest of NVIDIA’s laptop offering, introducing a mobile video card that’s better suited for mid-power systems, and cheaper than RTX 3060 to boot. Laptops featuring the new RTX 3050 video adapters will be available today, with all of the major vendors set to ship laptops using NVIDIA’s latest laptop adapter in short order.

NVIDIA’s xx50 tier of laptop video cards has traditionally been the company’s high-volume/low-price products for laptops, and the RTX 3050 family is no different. Laptops with the new adapters will start at $799, and will frequently crop up as a baseline option in Tiger Lake-H laptops. With Intel only shipping 32 EUs in Tiger Lake’s integrated GPU – just a third of how many are in Tiger Lake-U – Intel isn’t setting the bar for graphics performance particularly high in this generation of H-series CPUs. As a result, there’s a wide-open market for NVIDIA’s latest low-end graphics adapter to give these machines a boost in graphics performance.

And, like the RTX 3060 For Laptops launch back at the start of the year, it’s actually the laptop market that is getting the newest silicon first. For the RTX 3050 series, NVIDIA is rolling out their new GA107 GPU. Cut from the same cloth as the rest of the Ampere family, NVIDIA’s 5th Ampere chip is the smallest and cheapest yet, fulfilling the company’s traditional waterfall launch strategy of rolling out successively cheaper and lower-power/lower-performing chips for additional markets. As an added kicker, these are the first xx50 tier products to have ray tracing – and thus qualify for the RTX moniker – so expect to see NVIDIA promoting that aspect rather hard.

NVIDIA normally launches two parts at the xx50 tier for laptops, and for this generation NVIDIA has stuck squarely with tradition. At the top is the RTX 3050 Ti, a full-fat (or close to it) GA107 implementation with 20 SMs, for a total of 2560 CUDA cores. Below it is the RTX 3050 (vanilla), with has 16 SMs for 2048 CUDA cores. As these are Ampere family parts, NVIDIA has kept the basic GPU functional blocks proportional across the lineup, so we’re looking at 80/64 tensor cores and 20/16 ray tracing cores for the RTX 3050 Ti and RTX 3050 respectively.

Past that, NVIDIA isn’t sharing too much about GA107 in particular. We’re still waiting to find out the die size and transistor count (just how much smaller is it than the 276mm2 GA106?), as well as a few details like ROP counts.

As for clockspeeds, both RTX 3050 laptop parts are a bit more modestly clocked, owing to their lower TDP options. Officially, the boost clock for the RTX 3050 Ti for laptops is anywhere between 1035MHz and 1695MHz, depending on what the OEM dials in. Meanwhile the vanilla RTX 3050 for laptops lands between 1057MHz and 1740MHz; a bit higher than the Ti version, owing to the fewer enabled SMs in the lower-end part.

Meanwhile, both adapters will ship with 4GB of GDDR6 memory. We’re still awaiting confirmation from NVIDIA on the clockspeed, but 12Gbps is a reasonable bet for both power and cost reasons. Both cards come with a 128-bit memory bus – another typical design choice for xx50 tier parts – so this puts the cards’ memory bandwidth at or above 192GB/sec. 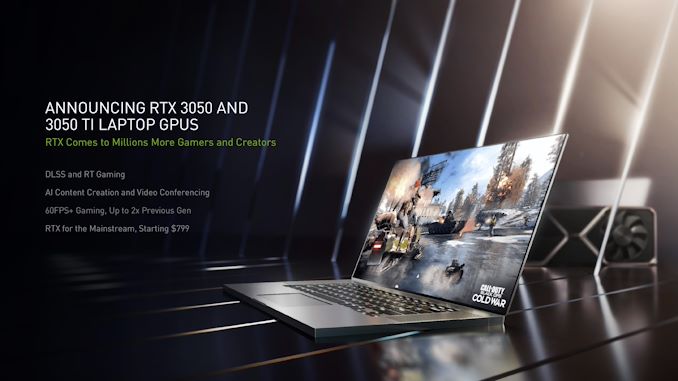 Finally, both parts offer the same 35 Watt to 80 Watt TDP window. This very wide range allows for the RTX 3050 parts to be suitable for use in everything from 13-inch gaming laptops to 17-inch workstation laptops. Though it also underscores the fact that the cards’ performance will vary pretty widely from OEM to OEM, since power and cooling allowances are such a critical element of performance. Overall, the new RTX 3050 parts come in at a lower TDP than the RTX 3060 – which started at 60 Watts – which opens the door for use in a bunch more designs, though I fully expect RTX 3060 to be more efficient where the parts overlap in power consumption.

For better or worse, NVIDIA doesn’t spend a lot of time talking about the actual performance of their low-end laptop adapters, and the RTX 3050 series is no exception. The company’s promotional focus is more on features and how it compares to Intel’s integrated graphics, so we don’t have a lot of performance guidance to work with. Not helping matters again is the wide TDP range, which means different laptop designs can end up being quite far apart in performance. 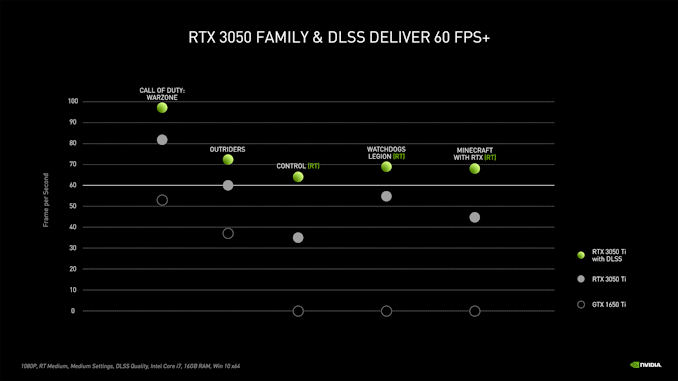 For the games where NVIDIA does provide GTX 1650 Ti data as a comparison point, they have the RTX 3050 Ti at roughly 60% faster. But with a sample size of two games, this should be taken as a very rough estimate.

If nothing else, expect to see NVIDIA push DLSS harder here than they have on any other RTX 30 series part thus far. As these are the lowest performing Ampere parts (to date), they have little performance to spare for ray tracing and other resource-intensive effects at native (1080p) resolution, so NVIDIA will be relying on DLSS to make these advanced features viable on this entry-level hardware.

Otherwise, as Ampere family parts, the new RTX 3050 for laptop accelerators offer the usual suite of NVIDIA features, including those laptop features rolled out back at the RTX 3060 For Laptops launch earlier this year. So this includes HDMI 2.1 output support and Dynamic Boost 2.0. As well, even these entry-level parts support PCI Express 4.0 connectivity and resizable PCIe base address register (reBAR) support to maximize performance there. 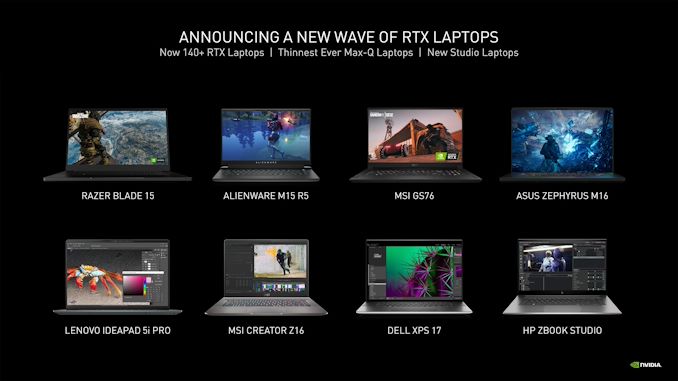 Overall, NVIDIA is touting 140 wins across the consumer and professional (Studio) markets, underscoring the fact that the RTX 3050 series will be NVIDIA’s highest volume parts for the laptop market. Over the years NVIDIA has established a rather cozy symbiotic relationship with Intel’s H-series laptop CPUs – with xx50 tier parts being the de facto choice for laptops that include a discrete GPU as a baseline option – and it looks like that will once again be the case for Tiger Lake -H. Already NVIDIA has wins in 15-inch and 17-inch laptops from Dell, Lenovo, HP, and ASUS, and there will be more to come as OEMs continue to launch their next-generation H-series laptops.

Finally, according to NVIDIA, the first RTX 3050-equipped laptops will be released as soon as today, depending on the shipping schedule of each OEM. Laptops with the new adapters will start at $799.