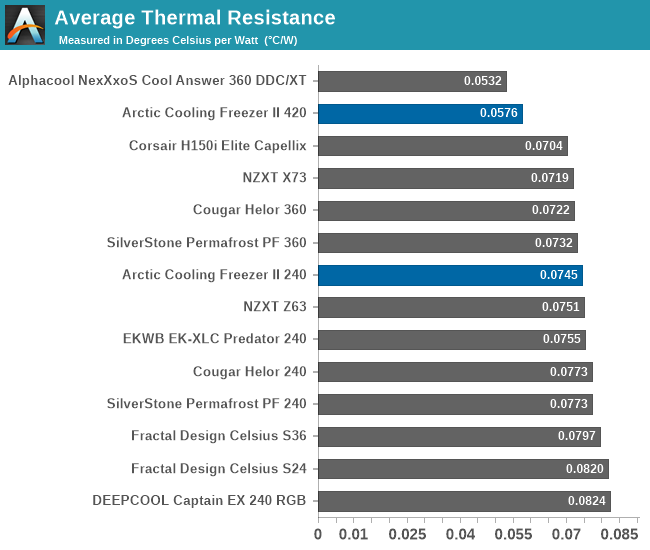 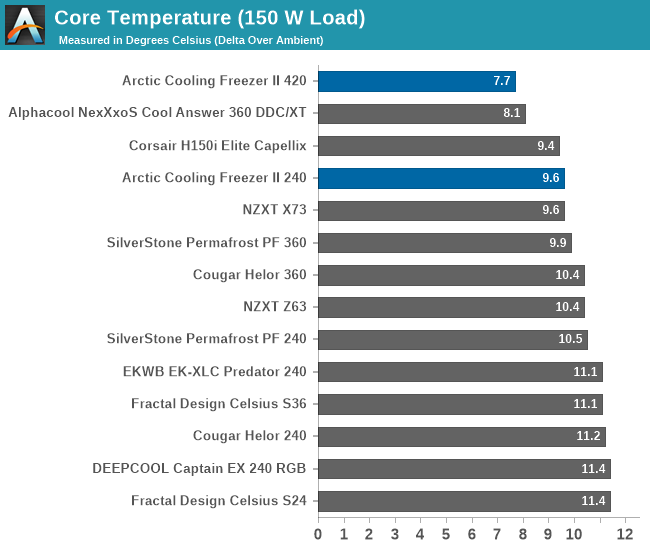 The sound pressure level of the cooler is at 43.8 dB(A), which is on the high side for comfortable use, but to be expected from a cooler using three high speed 140 mm fans. 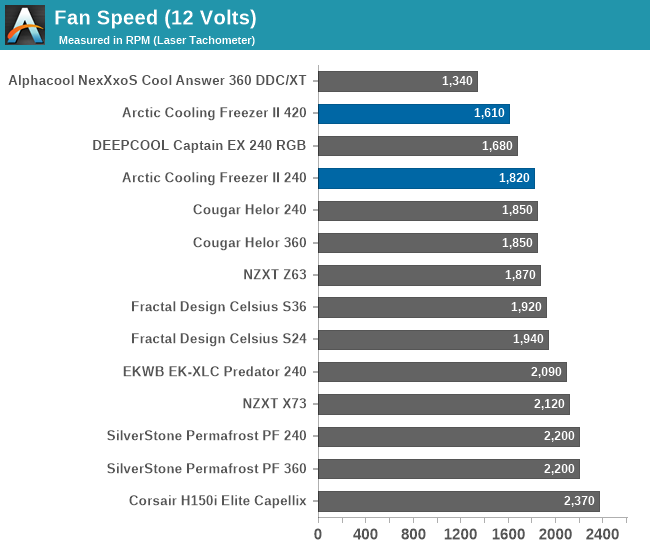 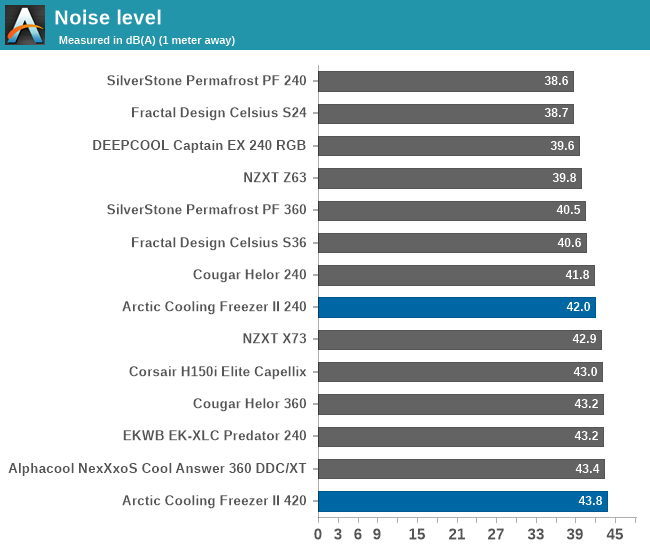 The 240 version of the cooler also performs very well, providing strong competition to equally-sized coolers. The average thermal resistance of the Liquid Freezer II 240 at full fan speeds is 0.0745 °C/W, placing it a tiny bit ahead of most of its direct competitors in terms of thermal performance. However, the sound pressure level of 42 dB(A) is higher than the figures we got from competitive products, with the 40 mm fan on the block mostly responsible for the increased noise output.

Using a PWM voltage regulator, we reduced the speed of the fans manually down to half their rated speed, which is 900 RPM. The pump was also connected to the same power source, functioning properly at this low-speed setting. 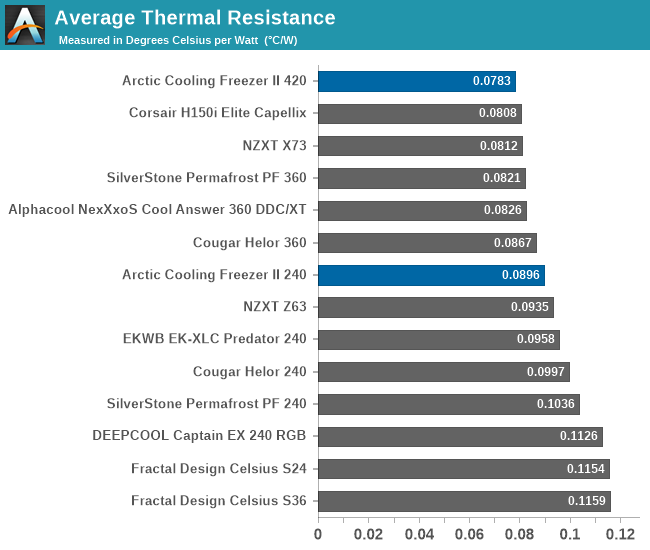 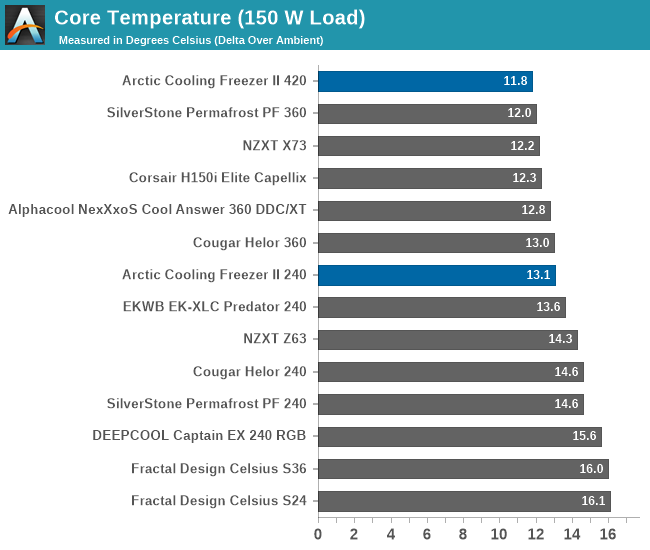 The Liquid Freezer II 240 seems to be doing great in this test, with an average thermal resistance of 0.0896 °C/W, surpassing nearly all equally sized AIO coolers. The catch is that it also is significantly louder than its direct competition as well. The emitting sound pressure of 36.7 dB(A) is not high enough to be considered loud, yet the difference over competitive products is significant and discernible. 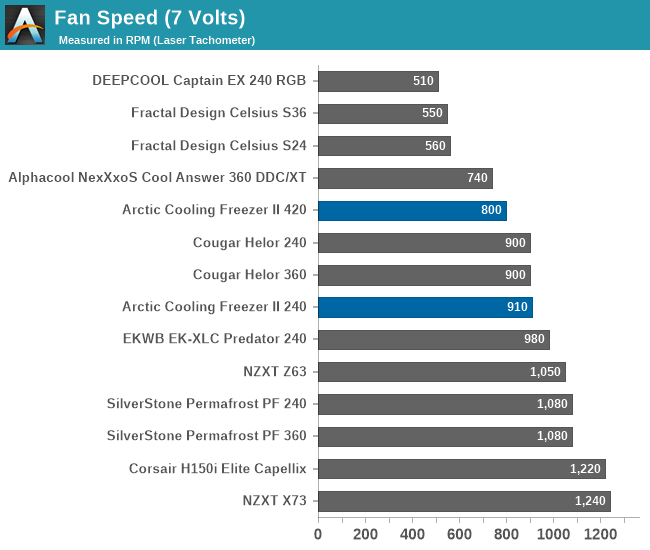 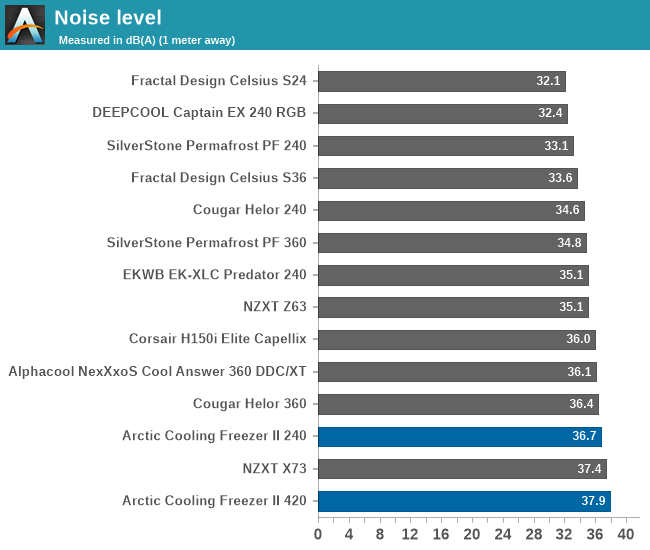 The massive proportions of the Liquid Freezer II 420 give the cooler a great performance advantage even when its fans and pump are at half speed. With an average thermal resistance is 0.0783 °C/W, the Liquid Freezer II 420 thermally outperforms everything that we have ever tested to this date. The sound pressure of 37.9 dB(A) is on the high side though, as expected from three 140 mm fans plus a small 40 mm fan on the main block. 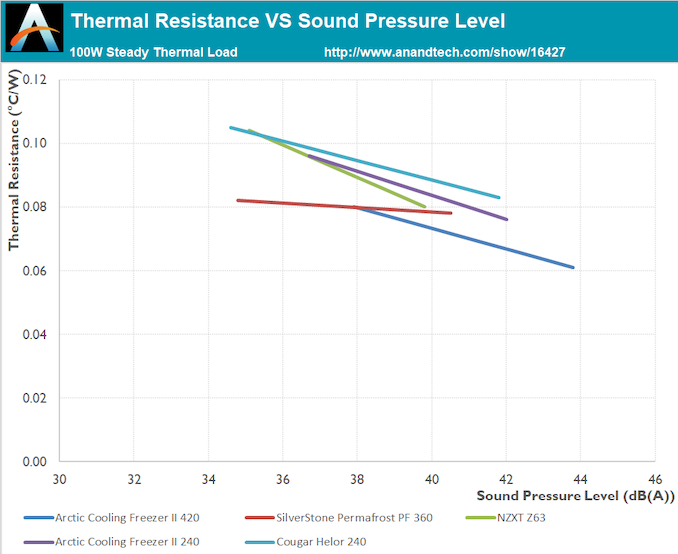 In this graph, we can discern how Arctic Cooling’s liquid coolers rank against the competition at a reasonable power level. We see that the Liquid Freezer II 240 can reach thermal resistance values slightly lower than competitive coolers but can be a bit louder than other designs. Much of that noise is coming from the additional 40 mm fan on the block but the significant backpressure of the thick radiator also is a bit to blame. The thermal performance of the Liquid Freezer II 420 is better than most of the competition but its performance edge is not that great under these operating conditions, as the massive cooler practically requires an equally massive load to reach its optimal operating conditions.