A lot of the following analysis comes from our ASRock Z490 PG Velocita review due to the near-identical firmware and software package the Z490 Aqua is supplied with.

The ASRock Z490 Aqua uses a near-identical BIOS to the ASRock Z490 PG Velocita, which we previously reviewed; the most notable difference is in the memory (DRAM) section, with some preset memory overclocking profiles designed for enthusiasts and extreme overclockers looking to eke out that extra percentage for benchmarking. Aside from memory, the board uses a custom Aqua skinned GUI, with a yellow, grey, and black color scheme. 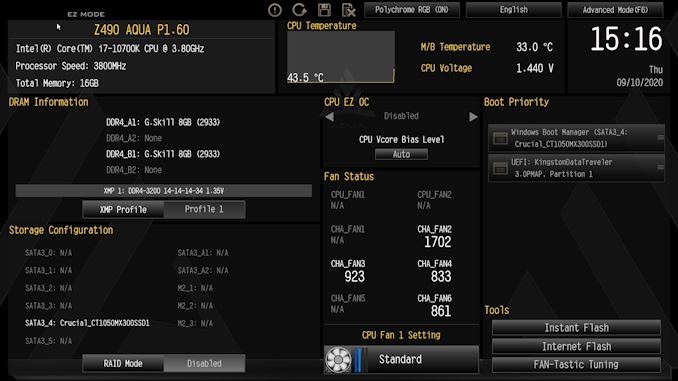 ASRock's UEFI BIOS for Z490 has two primary modes, basic and advanced. Focusing on the basic mode, it provides a quite comprehensive list of information across the entirety of the screen. From top to bottom, there's information for the installed processor, the version of firmware the board is using, as well as a list of installed memory including its speed. . On the right-hand side is a boot priority listing in which users can click and drag the desired boot order, with one-click access to ASRock's Instant Flash, Internet Flash, and FAN-Tastic Tuning tools. 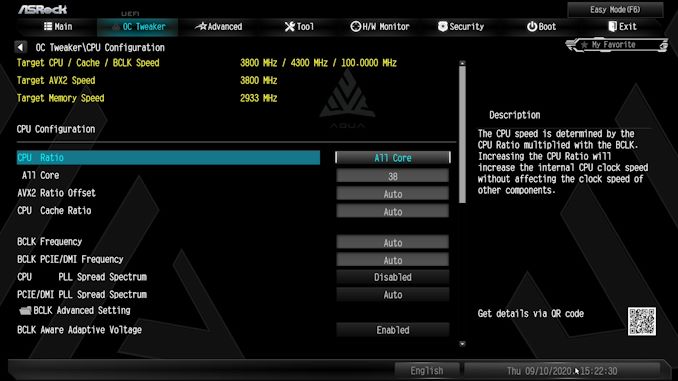 Upon pressing the F6 key will alternate between the basic and advanced modes, with the latter including the vast majority of the board's firmware features. The most comprehensive section is the advanced section with multiple menus, including the OC Tweaker, Advanced, Tool, H/W Monitor, Security, Boot, and Exit. Each of these is self-explanatory, but perhaps the busiest area is in the OC Tweaker section, where all overclocking settings reside. The OC Tweaker section allows users to overclock the CPU, memory, and integrated graphics onboard Intel's Comet Lake processors. Users can simply enable the built-in X.M.P 2.0 profiles onboard compatible memory or use ASRock preset memory profiles, which cater more towards performance users and enthusiast overclockers. 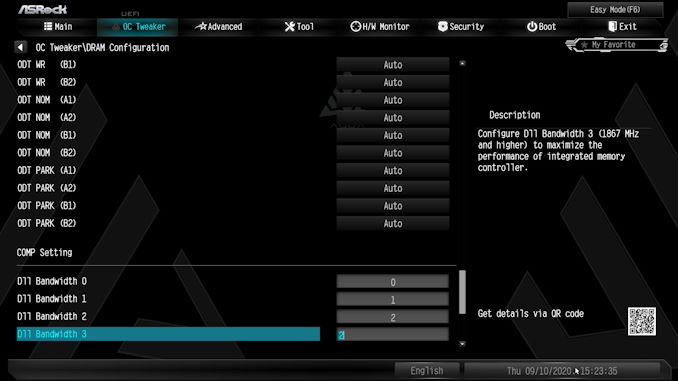 ASRock separates the settings into different sub-menus, including a dedicated section for CPU, voltage, and DRAM settings. Each submenu provides a wide variety of options, with CPU ratio and BCLK adjustments, as well as CPU AVX rations all available to customize. The CPU section also hosts all the relevant power settings for Intel Thermal Velocity Boost and Turbo and Speedstep settings. The DRAM section allows users to overclock memory and tweak latencies, with a one-click button for users looking to keep things simple and enable X.M.P 2.0 memory profiles. The voltage section includes all of the voltages, including CPU VCore, DRAM Voltage, and the customization of other voltages such as PLL, PCH, and VCCIO.

The ASRock Z490 Aqua's firmware is typical from the brand and is consistent throughout its Z490 models. It is easy to navigate, and although splitting each of the overclocking menus into CPU, DRAM, and Voltage, it keeps things tidy. As I noted in our previous review of the ASRock Z490 PG Velocita, I would personally prefer to see them located within the same menu for ease of use, without the need to constantly cycle different menus sub-menus to change core settings such as CPU frequency and CPU VCore voltage. The Aqua's integrated ASRock Polychrome RGB utility and Fan-Tastic fan tuning functionality within the firmware is a nice touch. Still, the software package does offer more on-the-fly customizability.

Supplied with the ASRock Z490 Aqua is a varied selection of software. The most prominent applications include the A-Tuning overclocking utility, which despite the Aqua's uniqueness, doesn't get treated to a custom GUI and instead opts for a basic skinned variant. A-Tuning allows users to alter both CPU and BCLK frequencies within Windows and make alterations to CPU and CPU Cache ratios and primary core voltage settings. 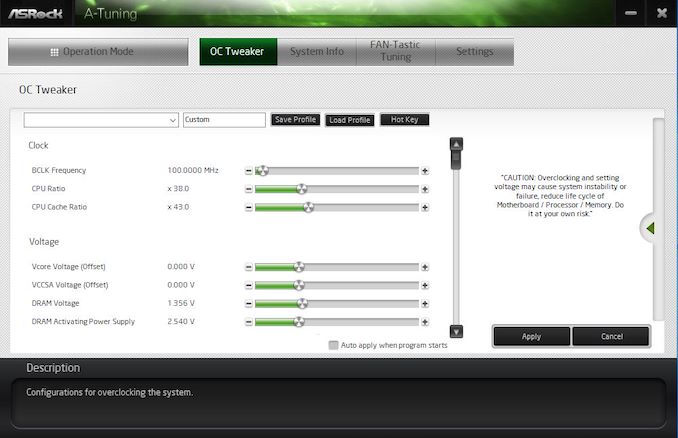 Other useful utilities include the ASRock Polychrome RGB utility for customizing the integrated RGB LEDs around the board, with its handy App Shop and Live Update tool, as well as Nahamic 3 for audio customizations. Users can install the software from the disc included within the accessories bundle, or download the latest versions from the Live App utility or the official product page on the ASRock website.