Upon the first boot into Windows, the ROG Maximus XII Hero WiFi allows users to select between two core modes, Intel Default and ASUS Optimized. The latter removes all of the CPU's power limits and lets the board's firmware do its thing. Overall the ASUS ROG UEFI firmware is all-around solid and is one of the most enhanced variants we've seen so far on the Z490 chipset. 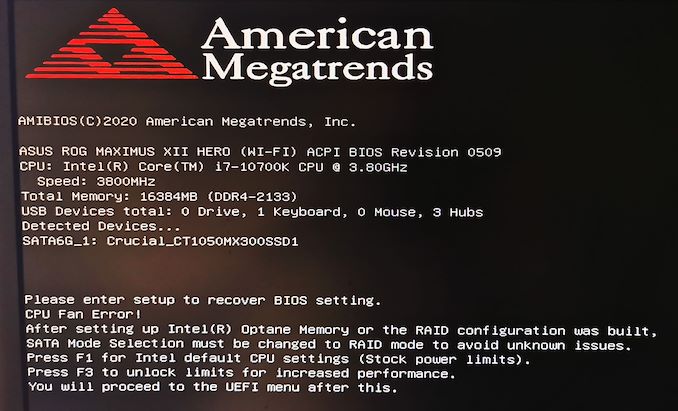 The ASUS ROG UEFI firmware includes two different modes depending on the level of the user, EZ and Advanced. The two modes can be switched between by pressing the F7 key, and both provide different levels of function. The EZ mode provides basic functions including enabling X.M.P memory profiles, switching between two CPU overclocking profiles, 'normal' and AI Optimized, as well as enabling Intel RST. The basic mode also displays a basic overview of installed hardware including the CPU and its core voltage, as well as motherboard temperature, DRAM status, the current fan profile, and allows users to access the QFan control utility. 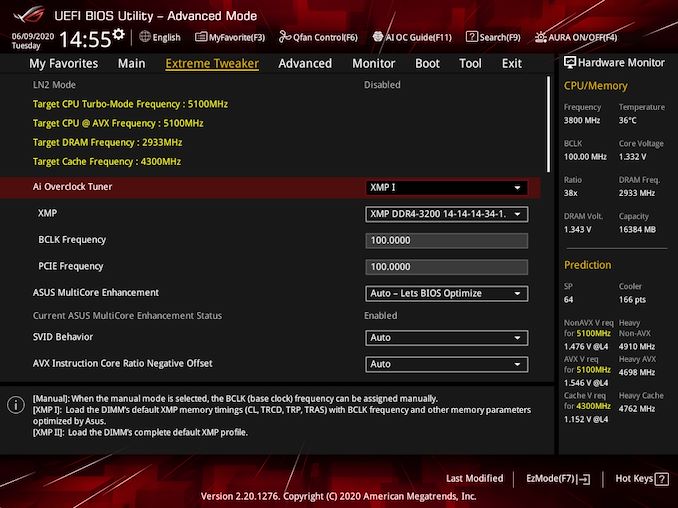 In the advanced section is where ASUS hides away all its customizable settings and options, and these are endless. The Republic of Gamers branding is synonymous with overclocking and generally signifies enthusiast-level features and quality. The most integral part of this is the Extreme Tweaker menu which opens up a host of CPU and memory overclocking options, with some of the most basic settings relevant to the CPU core and Cache frequencies. ASUS also goes all-in with its memory overclocking settings with an extreme memory tweaker which has a host of memory overclocking presets for hardened enthusiasts, as well as a load of memory latency options to select from.

One thing to note with ASUS is that it is very consistent with its firmware across its ranges, with the ROG, Prime, and TUF models all featuring its own GUI in relation to the boards branding. The ASUS ROG firmware is red, black and grey, with white text, and is intuitive and easy to navigate; it can be easy to get lost within the firmware with a plethora of sub-menus within menus for things like power options, VRM options, and Intel VF curve settings.

As we've seen with previous ASUS ROG motherboards, it almost always delivers a stacked software and driver package which is provided through the ASUS Armory Crate. This allows users to avoid connecting to the internet and hosts the files required to install the drivers and software from a stored portion of memory located on the board. This feature can be turned on or off within the BIOS, but it is unique and is something ASUS is doing consistently now. 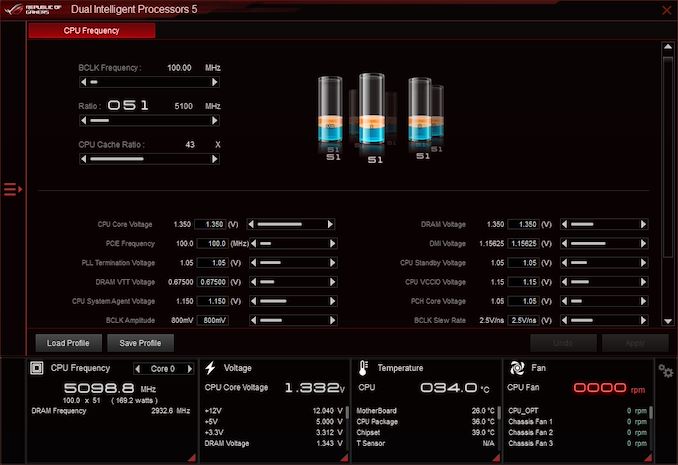 The majority of vendors are now starting to amalgamate its software into a couple of programs, as opposed to offering six or seven separate utilities like a few years ago. The ASUS AI Suite III is one such example and hosts a variety of different options including the AI Overclocking menu, which allows users to let the firmware automatically overclock the system based on set parameters like cooling performance, much the same as the firmware offers. It also includes a section to manually overclock the processor including options to increase the CPU Core frequency and CPU Vcore voltages, as well as CPU cache ratio, the BCLK frequency, and even the BCLK slew rate which is advanced as far as software goes. It also includes options to control the CPU power delivery, options to optimize or set custom fan profiles, as well as the EZ Update section which allows users to install and update to the latest drivers.

Also included in the board's software bundle is a custom ROG skinned variant of the CPU-Z monitoring utility, the GameFirst VI software which allows users to monitor network traffic and perform traffic shaping, as well as optimize the system specifically for gaming. The Ramcache III software allows users to create pools of high-speed storage using spare system memory, which is handy to reap the benefits of memory bandwidth as opposed to slower storage methods when using the 128 GB DDR4 capacity.

One thing we've noted across many motherboard reviews during the Windows 10 era is a lack of audio software supplied with the core drivers, especially with boards that feature Realtek controllers. ASUS includes the ROG Sonic Studio III software along with its SupremeFX S1220 HD audio codec which allows users to enhance the auditory experience, something we wished more vendors would do without having to connect up to the Microsoft store. Overall the ASUS ROG Maximus XII Hero WiFi's software package is plentiful, and has everything needed, and then some for users to sink their teeth into.