This section looks at some of the other commonly used benchmarks representative of the performance of specific real-world applications.

We use CINEBENCH R15 for 3D rendering evaluation in our system reviews. The program provides three benchmark modes - OpenGL, single threaded and multi-threaded. Evaluation of different PC configurations in all three modes provided us the following results. 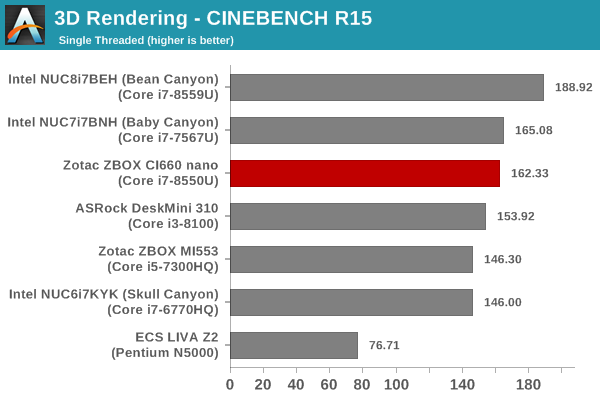 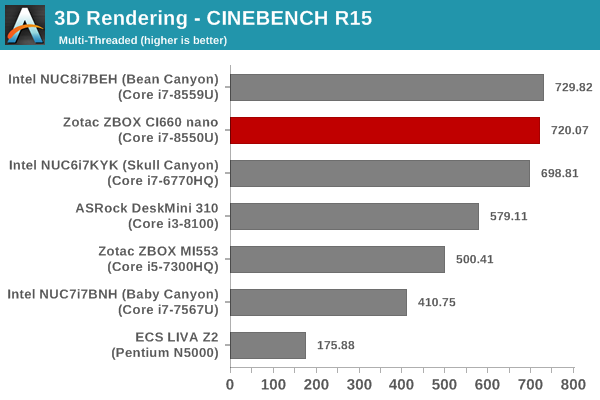 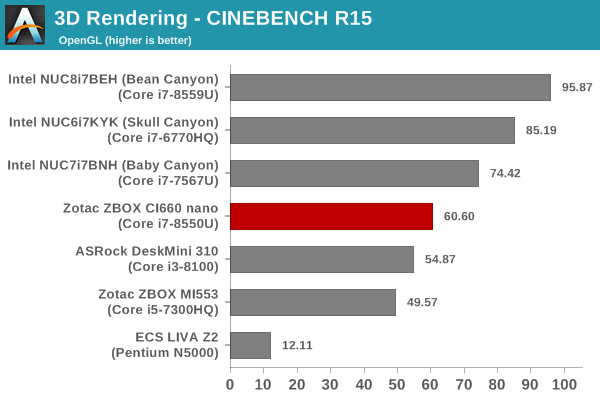 The Core i7-8550U's 4C/8T configuration helps the CI660 nano to perform better than even the Skull Canyon NUC in the multi-threaded workload. The single-threaded performance of the configuration is very similar to that of the actively-cooled Kaby Lake NUC (Baby Canyon). That said, the Coffee Lake NUC (Bean Canyon) with its 28W TDP processor easily comes out on top. In the OpenGL case, the systems with Iris Plus Graphics perform better than the CI660 nano. The key takeaway here is that the CI660 nano can easily compete with other actively cooled PCs in terms of performance.

Next up, we have some video encoding benchmarks using x265 v2.8. The appropriate encoder executable is chosen based on the supported CPU features. In the first case, we encode 600 1080p YUV 4:2:0 frames into a 1080p30 HEVC Main-profile compatible video stream at 1 Mbps and record the average number of frames encoded per second. 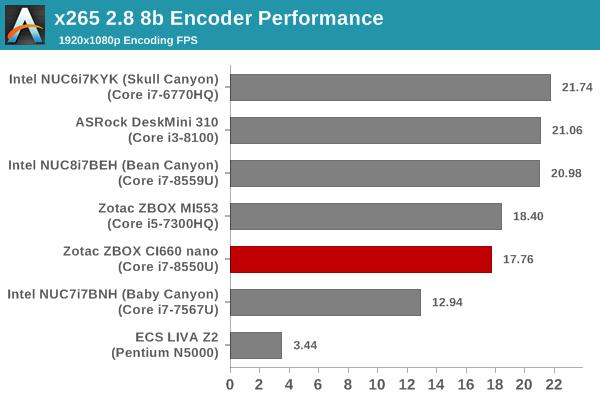 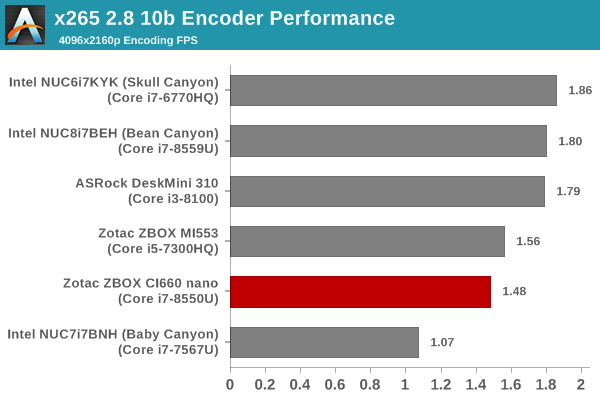 The performance in both tests depends on a combination of factors - the processor TDP, as well as the number of available threads. When this combination is taken into account, the 15W TDP Core i7-8550U loses out to almost all other tested combinations - the Skull Canyon NUC has a 45W TDP 4C/8T processor, the Bean Canyon has a 28W TDP 4C/8T processor, the DeskMini 310 has a 65W TDP 4C/4T processor, and the ZBOX MI553 has a 45W 4C/4T processor. The CI660 nano almost matches the performance of the ZBOX MI553 in these workloads.

7-Zip is a very effective and efficient compression program, often beating out OpenCL accelerated commercial programs in benchmarks even while using just the CPU power. 7-Zip has a benchmarking program that provides tons of details regarding the underlying CPU's efficiency. In this subsection, we are interested in the compression and decompression rates when utilizing all the available threads for the LZMA algorithm. 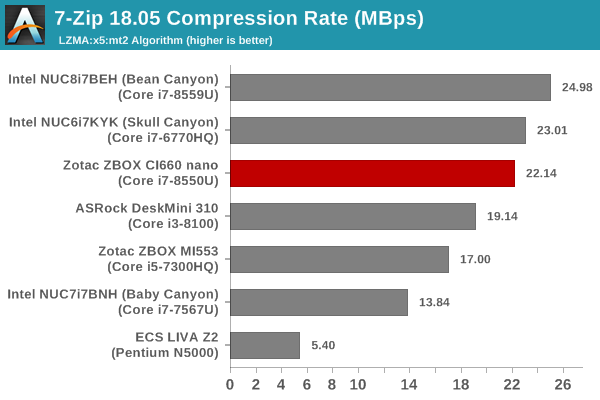 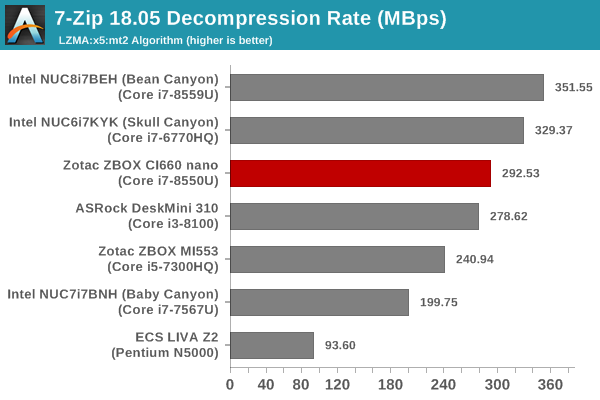 The performance in these workloads tracks what we observed in the SYSmark 2018 and PCMark 10 benchmarks.

Cryptography has become an indispensable part of our interaction with computing systems. Almost all modern systems have some sort of hardware-acceleration for making cryptographic operations faster and more power efficient. In this sub-section, we look at two different real-world applications that may make use of this acceleration.

BitLocker is a Windows features that encrypts entire disk volumes. While drives that offer encryption capabilities are dealt with using that feature, most legacy systems and external drives have to use the host system implementation. Windows has no direct benchmark for BitLocker. However, we cooked up a BitLocker operation sequence to determine the adeptness of the system at handling BitLocker operations. We start off with a 2.5GB RAM drive in which a 2GB VHD (virtual hard disk) is created. This VHD is then mounted, and BitLocker is enabled on the volume. Once the BitLocker encryption process gets done, BitLocker is disabled. This triggers a decryption process. The times taken to complete the encryption and decryption are recorded. This process is repeated 25 times, and the average of the last 20 iterations is graphed below. 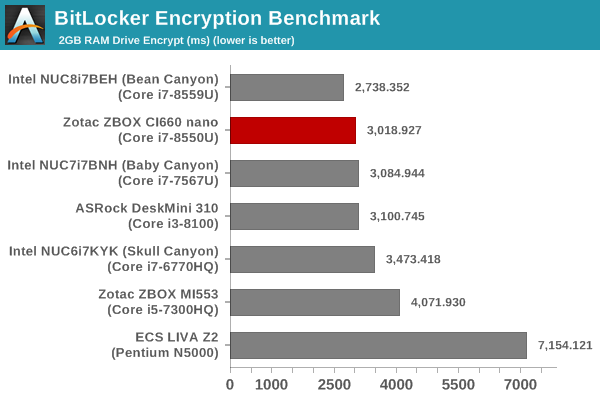 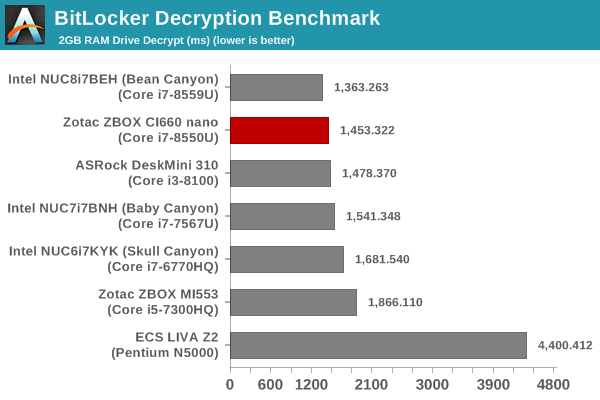 The numbers are closely stacked, with the CI660 nano surpassed only by the Bean Canyon NUC.

Creation of secure archives is best done through the use of AES-256 as the encryption method while password protecting ZIP files. We re-use the benchmark mode of 7-Zip to determine the AES256-CBC encryption and decryption rates using pure software as well as AES-NI. Note that the 7-Zip benchmark uses a 48KB buffer for this purpose. 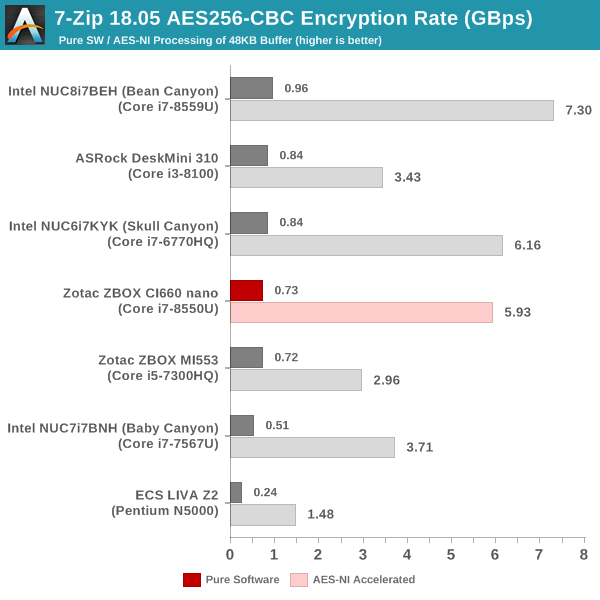 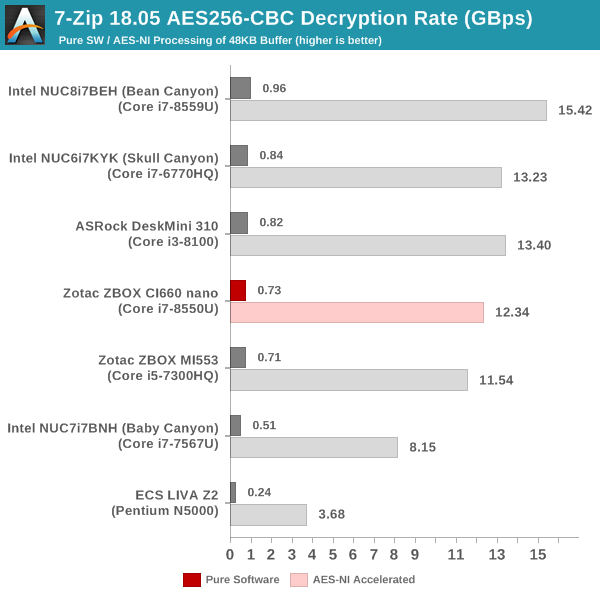 In this workload, the CI660 nano is in the middle of the pack, but the numbers are very close to each other for the systems with similar number of cores / threads.

Yet another cryptography application is secure network communication. OpenSSL can take advantage of the acceleration provided by the host system to make operations faster. It also has a benchmark mode that can use varying buffer sizes. We recorded the processing rate for a 8KB buffer using the hardware-accelerated AES256-CBC-HAC-SHA1 feature. 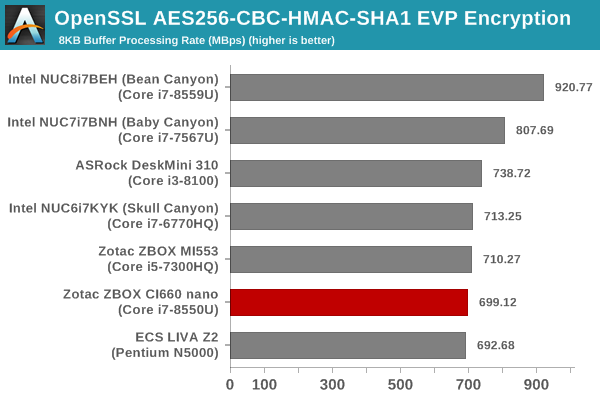 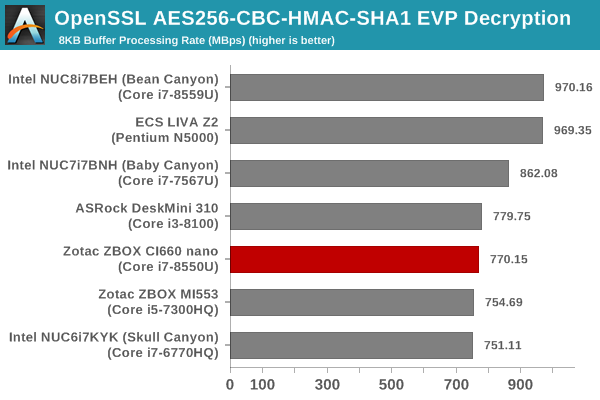 Agisoft PhotoScan is a commercial program that converts 2D images into 3D point maps, meshes and textures. The program designers sent us a command line version in order to evaluate the efficiency of various systems that go under our review scanner. The command line version has two benchmark modes, one using the CPU and the other using both the CPU and GPU (via OpenCL). We present the results from our evaluation using the CPU mode only. The benchmark (v1.3) takes 84 photographs and does four stages of computation:

We record the time taken for each stage. Since various elements of the software are single threaded, and others multithreaded, it is interesting to record the effects of CPU generations, speeds, number of cores, and DRAM parameters using this software. 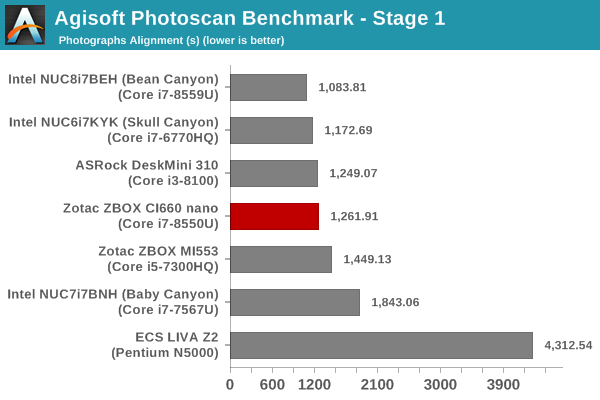 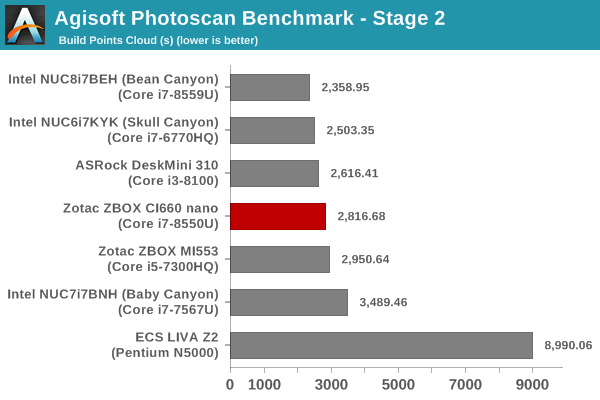 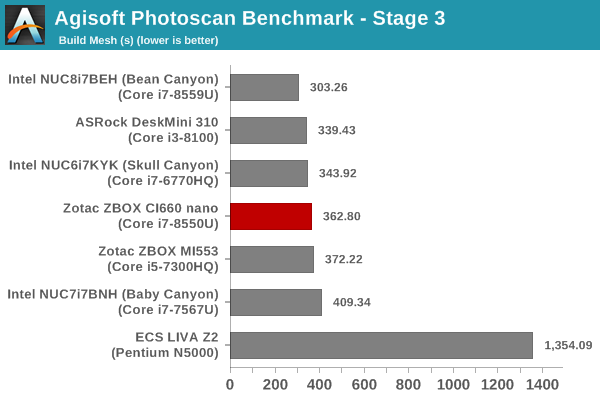 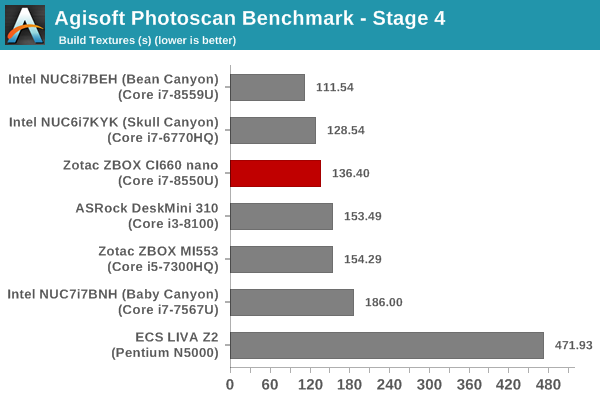 The Agisoft numbers are impressive, considering that the CI660 nano is passively cooled.

Wrapping up our application benchmark numbers is the new Dolphin Emulator (v5) benchmark mode results. This is again a test of the CPU capabilities. 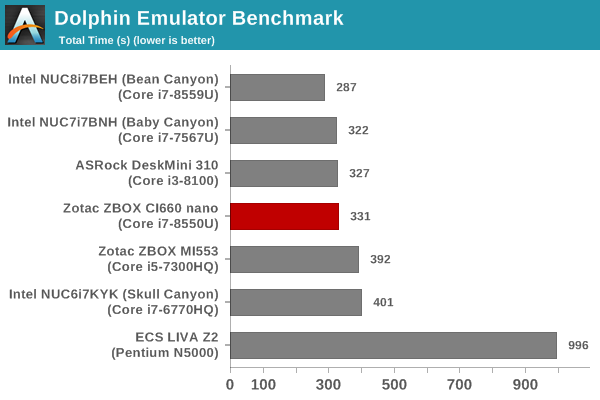 Only the Bean Canyon NUC performs significantly better than the CI660 nano.

On the storage side, one option would be repetition of our strenuous SSD review tests on the drive(s) in the PC. Fortunately, to avoid that overkill, PCMark 8 has a storage bench where certain common workloads such as loading games and document processing are replayed on the target drive. Results are presented in two forms, one being a benchmark number and the other, a bandwidth figure. We ran the PCMark 8 storage bench on selected PCs and the results are presented below. 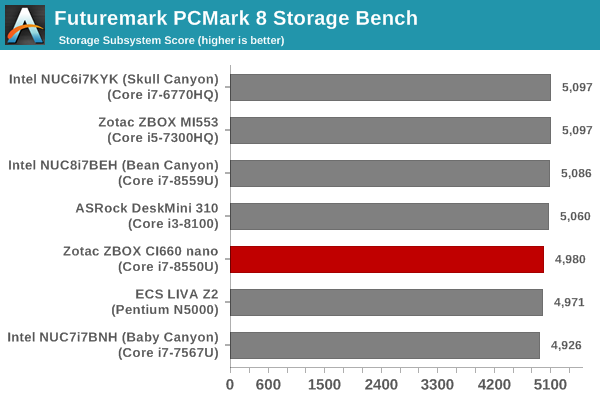 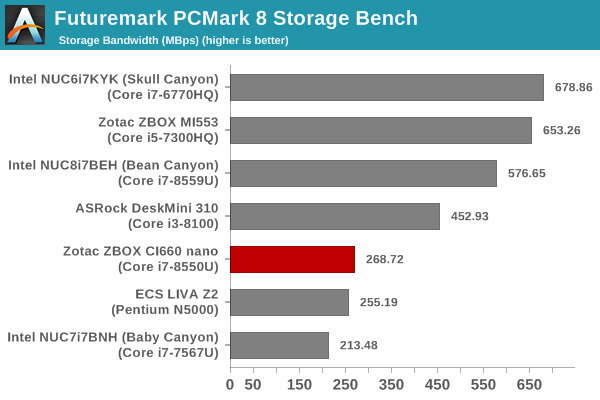 One of the drawbacks (if users might want to call it that) of the CI660 nano's platform is the absence of a NVMe SSD slot. Only a single SATA drive is supported, and this reults in an entry in the lower half of the graph for the CI660 nano and its Crucial BX300 SATA SSD. Make no mistake - the BX300 has very good performance for a SATA SSD with its MLC NAND, but, it does come up short against the NVMe SSDs installed in most of the other systems.