MSI for the entirety of its AM4 motherboard line-up uses its Click BIOS 5 interface, which has a very easy to use ‘Easy’ mode upon entry after pressing the Del or F2 key. The GUI follows a familiar red and black ‘gaming’ theme throughout the entirety of the BIOS with white text on a black background. When each option is highlighted, the selection is signified by a red background across the option. 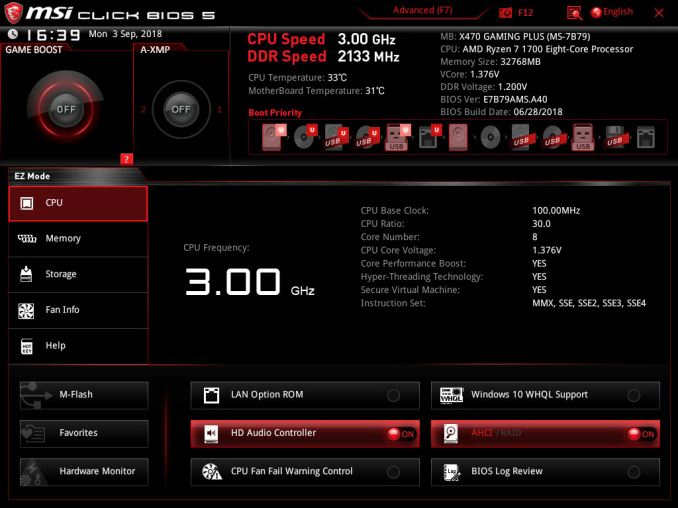 The entry screen displays core information about installed components such as the CPU and memory in the top third of the screen, while the rest of the screen gives different options for information windows which include flashing the BIOS, among other things. The two main fundamentals on the EZ mode are the GAME BOOST one-click CPU overclocking button and A-XMP memory tools for easy and automatic overclocking, which incidentally remain on the top panel throughout the entirety of the BIOS.

The Game Boost button applies different settings based on whatever processor is installed. For reference and first-generation Ryzen users, the Game Boost applies a 3.8 GHz overclock to a Ryzen 7 1800X, 3.6 GHz to a Ryzen 7 1800 and a very modest 3.2 GHz to a Ryzen 7 1700 processor. It seems MSI has gone with a less aggressive approach of hammering voltages as with Game Boost applied our Ryzen 7 1700 processor at maximum load would pump a very conservative 1.2 V through our test bench chip. This is a remarkable improvement as the B350 Tomahawk Game Boost would apply 1.4 V, but with a 200 MHz higher clock speed than this X470 Gaming Plus; a trade-off I would be willing to live with as 1.4 V is relatively high for 24/7 use at such a low clock speed. 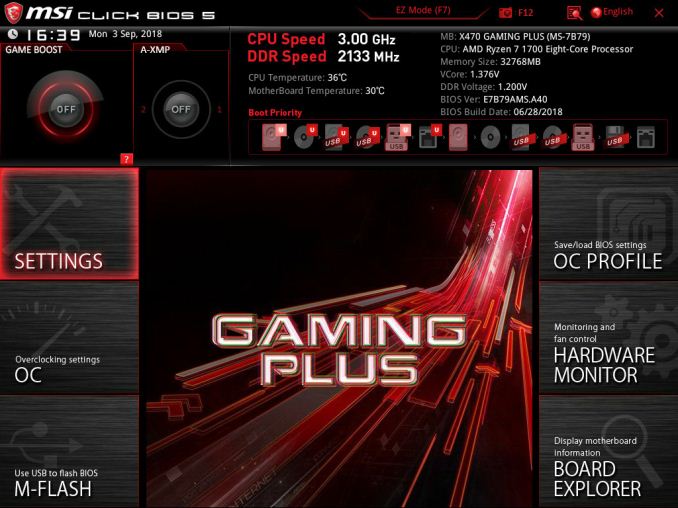 Moving onto the ‘advanced’ section which can be accessed by pressing the F7 key has a nice Gaming Plus graphic in the center of the screen. The advanced section opens up a wealth of different and easily accessible sections of the BIOS which includes the OC section for overclocking the CPU and memory, an M-Flash section or updating the boards firmware to the latest version, a visually basic but effective hardware monitor for setting and creating custom fan profiles and board explorer which allows users to navigate around a graphic model of the X470 Gaming Plus, and it’s installed components. 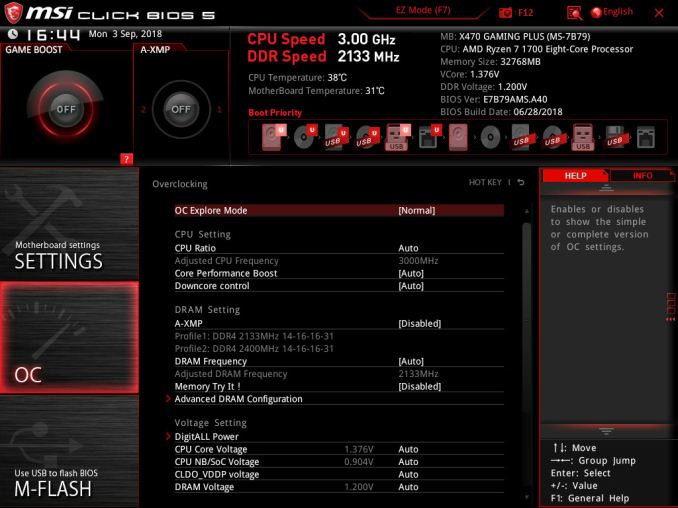 In the OC section all the options in relation to overclocking the installed processor and memory are available for tweaking. All the relevant settings for adjusting the processor's ratio which users can do in 100 MHz increments. Due to this model not featuring an external clock generator, the base clock frequency is locked down to 100 MHz. Memory wise this board officially supports DDR4-3466 but opening up the DRAM frequency option reveals that a maximum of DDR4-4200 can be selected; it is highly unlikely that any user will manage to achieve this on ambient cooling methods, or at all due to the integrated memory controller onboard the SoC. 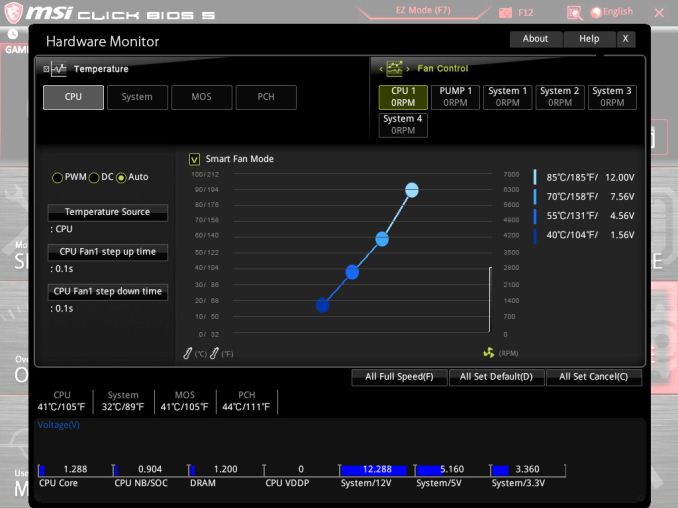 The hardware monitor interface is clean, informative and allows users to control installed fans through a multi-point temperature and power curve. Each fan can be controlled individually and compatible fans can be switched between DC and PWM modes. 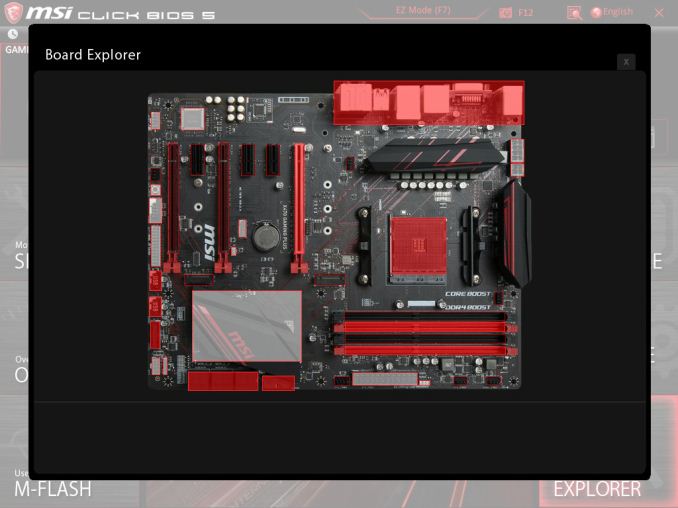 Having an intuitive board explorer is beneficial for a couple of reasons. First of all, it allows users to get a bird’s eye view of the board, with installed components in the different slots and headers highlighting up in red. Clicking on each of the highlighted areas brings up basic information about what’s currently installed such as the memory, devices plugged into the rear panel and even the processor installed into the AM4 socket.

One of the favorable elements to the MSI Click BIOS 5 interface is the clean aesthetics and how responsive this UEFI BIOS is on the whole. It’s a solid play for MSI on many levels and the main axiom they have gone for seems to be ‘if it’s not broken, don’t fix it’. Another major improvement from a novice users point of view is the Game Boost one-click overclocking button applies much less voltage than we have seen from the first generation of AM4 motherboards. While the frequency settings on our Ryzen 1700 processor are applied more cautiously than other models, so is the voltage and is a better trade-off to make in terms of heat and power generated by 1.4 V of VCore through an eight-core processor such as this one. That being said MSI has a great UEFI BIOS and for a $120 model, all the options required for the average user is covered, including some of the more hardcore enthusiasts with many options to tweak memory timings and sub-timings being some of the most notable to mention.

Most of the following analysis on this page is taken from our MSI MEG X399 Creation motherboard review as the majority of the software package provided with the X470 Gaming Plus remains much the same.

One thing MSI like to do to is bolster their gaming branded boards with an overabundance of software so that users can make the most of their purchase. Just like other vendors do, MSI keeps to a set core of software and applications such as MSI’s Command Center which gives users the ability to overclock their systems without needing to use the BIOS. Other notable utilities include an MSI gaming skinned CPU-Z monitoring application, the MSI Mystic Light RGB which allows users to customize the color and effects of the RGB LEDs, as well as the headers and the Nahimic 2+ audio utility which gives users scope to customize their listening experiences based on what kind of audio is being played back etc music, gaming or film/TV. 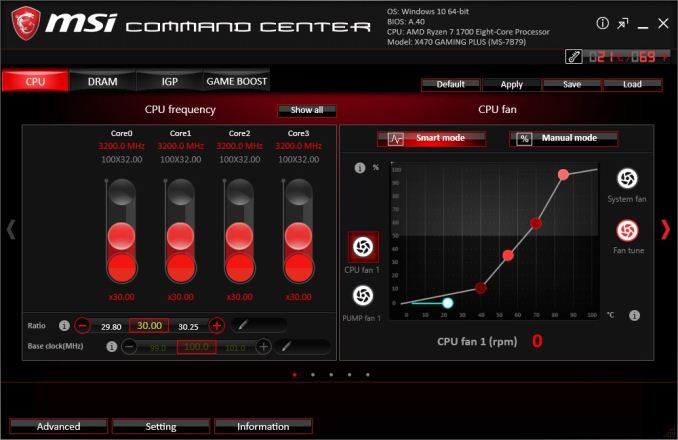 The MSI Command Center utility provides a variety of informative monitoring abilities as well as allowing users to overclock their system within Windows. The CPU frequency option enables users to either click and drag the interactive slider up to the desired core clock speed, or it can be done incrementally in steps of 25 MHz via the plus and minus buttons. The Command Center app does inhibit the ability to directly change memory voltages, and instead users can select through the different Game Boost profiles and enable them this way. The MSI Command Center app also includes a hardware monitor similar to what's inside the BIOS and has a slightly less intimidating fan profile selection tool. 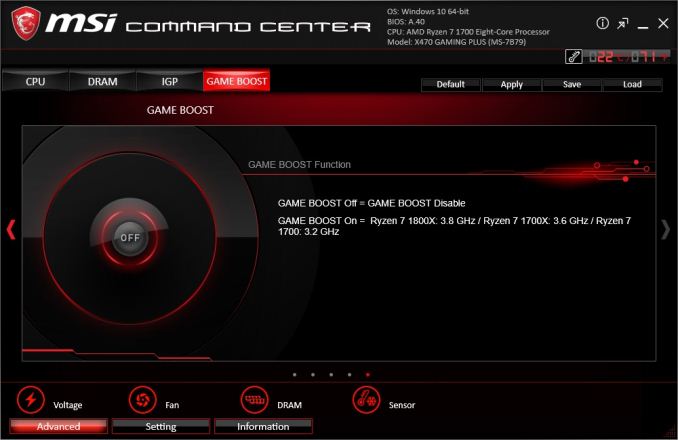 The Game Boost section within MSI’s Command center software gives users the ability to enable the Game Boost function which mirrors the one-click button within the BIOS. It’s informative in terms of what the button applies settings wise, but it would have been a nice touch to include that the voltages as each of the three listed CPUs gets the exact same overclock applied regardless of different silicon. While the X470 was launched simultaneously with the second generation of Ryzen processors such as the Ryzen 7 2700X, the software doesn’t list any of the settings it may apply to the newer selection of chips which I was actually expecting it to do. 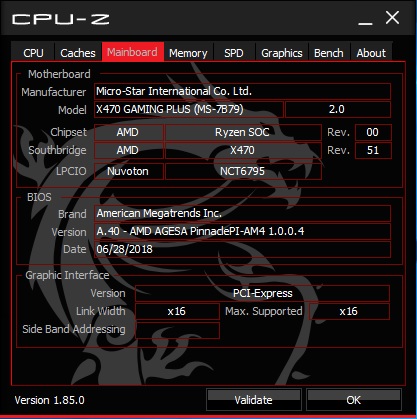 A custom MSI Gaming themed CPU-Z skin is available to download, or via the installation CD (though it's always recommended once online to update to the latest version). CPU-Z is a monitoring utility created by CPUID and allows users the ability to monitor CPU core voltage, CPU frequency as well as the set multiplier, base clock (bus) speed, and other CPU and memory relevant settings such as CAS latency timings and memory frequency. 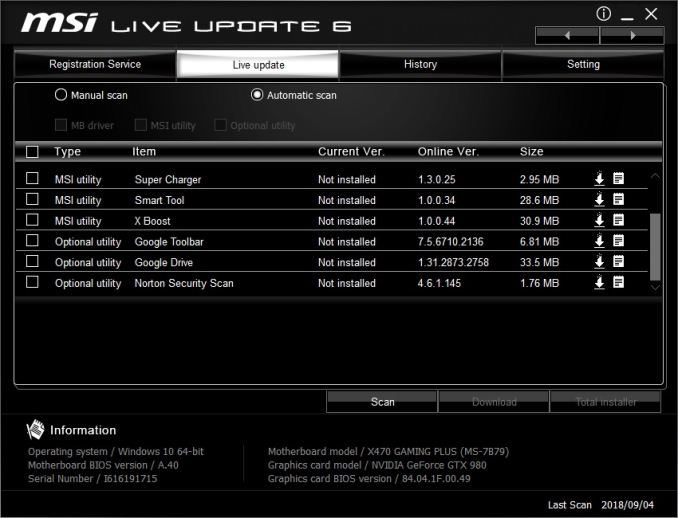 MSI's Live Update 6 software can be quite useful for updating motherboard drivers and software to the latest versions. Users can download with the intention to install manually or use the total installer button which downloads the software and installs it automatically saving time. There are options to scan for software automatically or manually if there's a certain app or utility that's required, although a full list of supported utilities can be installed directly from the installation CD, or via the product page from the MSI website. 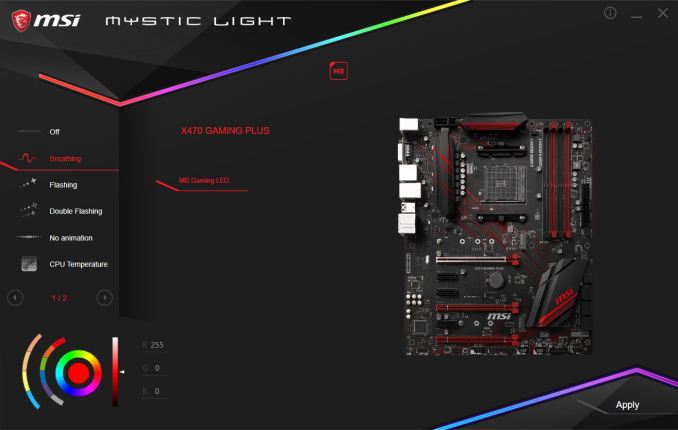 While the current version of the MSI Click BIOS 5 UEFI firmware doesn’t have any functionality or scope to customize the onboard RGB LEDs, users can do so by using the MSI Mystic Light software. The Mystic Light software allows users to not only control and customize the color of the RGB LEDs integrated into the board, but it also offers customization of the two included 5050 RGB 12 V headers too. Users can select between seven different lighting effects such as breathing, flashing or even select a light show based on music or current CPU temperature. Users wishing to avoid the RGB craze can turn the LEDs off, or set and sync the integrated LEDs and RGB headers to a solid color if they so wish. 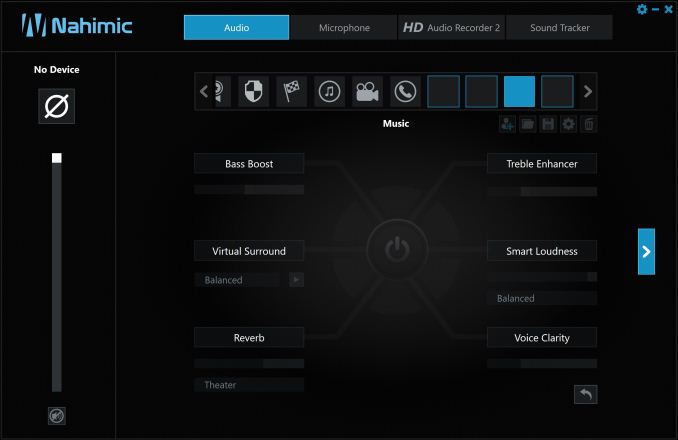 The MSI and A-Volute partnership stretches all the way back to 2014 and the result came a year later through the Nahimic brand. The Nahimic 2+ audio software allows users to tweak and change effects based on the audio that’s being played and offers a futuristic interface to boot. Users can select between different preset profiles such as music, gaming and film, with the option to change certain auditory characteristics such as bass, treble and virtual surround sound. The microphone option offers basic voice shaping technology which can be fun during VOIP conversations, but it’s not something I have ever felt the need to utilize. The most important feature within gaming is the Sound Tracker option with users gaining the ability to toggle and test sound from their headset and speakers coming from different locations; this is basically virtual surround sound specifically for gaming.

The software included from MSI follows the same design and gaming themed properties as the X470 Gaming Plus itself and does offer some useful customizations for the integrated RGB LED lighting and a more immersive audio experience through the Realtek ALC892 HD audio codec. The Command Center utility offers much of what the BIOS does in terms of overclocking setting aside from more in-depth options such as RAM latency sub-timings, but much of what a novice user might be familiar with is included.