The NVIDIA Titan V Deep Learning Deep Dive: It's All About The Tensor Cores 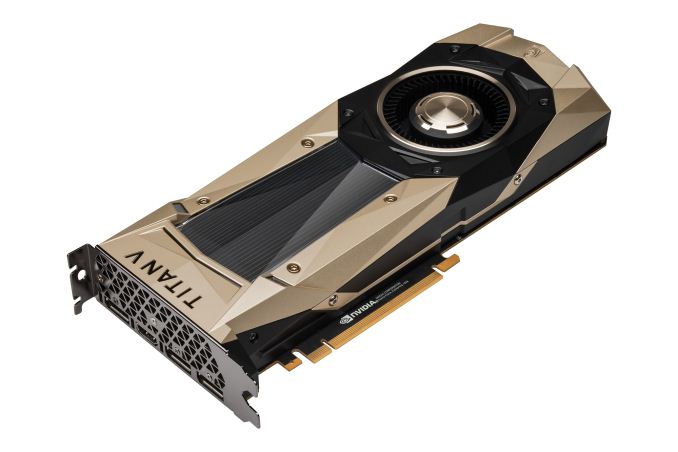 When we last discussed the NVIDIA Titan V in our preview, it was only a few weeks after its surprise launch at the 2017 Neural Information Processing Systems conference. We came away with the understanding that the Volta-based Titan V was a new breed of NVIDIA’s prosumer line of video cards, one that essentially encapsulated NVIDIA’s recent datacenter/compute achievements and how they got there. Which is to say, deep learning and neural networking has quickly become the driving force behind NVIDIA GPUs as state-of-the-art compute accelerators, now incorporating built-in hardware and software acceleration for machine learning operations. Deep learning prowess is the calling card of the Titan V and of Volta in general, and that performance is what we will be investigating today.

The most eye-catching of Volta’s new features are the new specialized processing blocks – tensor cores – but as we will see, this is very much integrated with the rest of Volta's microarchitectural improvements and surrounding software/framework support for deep learning (DL) and high performance compute (HPC). Matching up with the NVIDIA Titan V are the Titan Xp and GeForce GTX Titan X (Maxwell), with the AMD Radeon RX Vega 64 also present for some tests.

Circling back to NVIDIA’s compute endeavors, with Titan V, the Titan brand became closer than ever to workstation-class compute, featuring a high-end compute-centric GPU for the first time: the gargantuan 815 mm2 GV100. Complete with a workstation-class price tag of $3000, the Titan V doubled-down on high performance compute (HPC) and deep learning (DL) acceleration in hardware and software, while maintaining the fastest graphics performance around. Looking back, it’s a far cry from the original Kepler-based GeForce GTX Titan, a jack-of-all-trades video card that acted as enthusiast flagship with full double precision (FP64) compute for prosumers. Up until Titan V, NVIDIA’s Titan lineup more-or-less represented that design methodology, where a big GPU served as lynchpin for both compute and consumer lines.

With Volta, there's little detail of anything other than GV100 existing, outside of Tegra Xavier’s Volta iGPU, which is also part of Drive PX Pegasus. So as it stands, Volta is only available to the broader public in the form of the Titan V, though depending on the definition of ‘broader public,’ the $9000 32GB Quadro GV100 released in March might fall under that category too.

Deep learning and compute aside, there are a few more factors involved in this iteration of the Titan brand. NVIDIA has less need to make a name for itself with the Titan line, of which the original GTX Titan did exactly that by invoking the NVIDIA’s K20Xs powering Oak Ridge National Laboratory’s Titan supercomputer, and then setting a new high in performance (and price). Nor is there any particular competitive pressure in pricing or performance – the GeForce GTX 1080 Ti has no direct competition while the Pascal-based Titan X/Xp has carved out a $1200 price bracket above the previous $1000 mark.

Meanwhile, it’s fair to assume pushing the reticle limit (815mm2) on a new process node (12nm FFN) with new microarchitecture and additional HBM2 packaging results in poor-yielding silicon, and thus fewer options for salvage parts, especially if they needed to be validated at enterprise level (i.e. Teslas and Quadros). So a more-prosumer-than-consumer Titan V part would be the best – and only – fit, given that the gaming performance isn’t at the level of $3000. Ultimately, as we’ve discussed prior, NVIDIA seeds academics, developers, and other researchers at a lower cost-of-entry to Tesla V100s, with the feedback contributing to ecosystem support of Volta. And on that note, while Titan V’s non-ECC HBM2 and GeForce driver stack are more consumer oriented, the card still directly benefits from software support with frameworks and APIs as part of NVIDIA’s overall deep learning development efforts. Other than NVLink, Titan V’s main compute functions (FP64, FP16, tensor core) are uncrippled, which makes sense as single node Titan V’s don’t quite cannibalize sales of NVIDIA’s other compute products. If that were to change with the Quadro GV100, cryptomining will ensure that prices are kept apart. 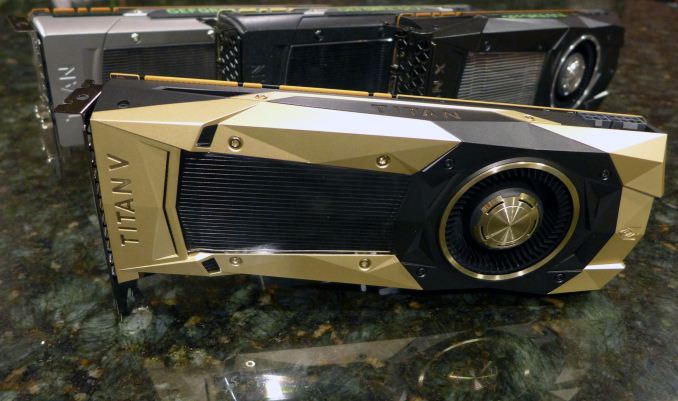 Taking a step back, the approach with Volta doesn’t mesh with NVIDIA’s previous approaches with Pascal and others. Instead of leading with a compute-centric big die design that could naturally cascade down the consumer stack as smaller GDDR5(x) designs for enthusiast graphics, they went for a gargantuan low-yielding die with good amounts of silicon area dedicated to brand-new non-graphics functions (i.e. tensor cores). We noted that tensor cores were a calculated bet, and broadly-speaking it was the usual tradeoff between lower-margin consumer graphics performance against lower-volume compute, one that NVIDIA could easily afford. The past couple years have put NVIDIA in pole position for raw consumer graphics performance and mindshare, while years of continued involvement at the forefront of GPU accelerated deep learning have put them in prime position to implement DL-specialized hardware with corresponding software support.

And as a side note, cryptomining demand has also thrown a wrench in matters, depleting much of the current generation products for extended periods of time. In turn, the consumer market hasn’t quite been saturated with current generation video cards, leaving NVIDIA in no rush to push out a new GeForce generation. Though with all the microarchitectural improvements over Pascal, I’m sure that Volta with disabled tensor cores could be levied as a very capable gaming product if necessary – the Titan V is still king of the hill – just not at the same margins as last generation. In any case, NVIDIA quarterly financials continue to cite high Pascal GeForce sales, and like all marquee silicon designers has leapfrogging design teams, the fruits of which we might just see in a few months.

Whatever the case may be with the next generation consumer GeForce, the big picture is that both NVIDIA and AMD have publicly stated the necessity of GPU architecture bifurcation – one for HPC/ML, and one for graphics/gaming. For NVIDIA, considering that Pascal has been around for over 2 years now, Volta is conspicuously absent from recent speculation over the next GeForce generation. In looking at the Titan V today, it almost seems that NVIDIA’s divergence is imminent. Even in the case of a Volta-based GeForce launch, the implementation of consumer Volta would be a very big hint at the future direction of GPUs, gaming and compute alike. At the very least, it would be a smaller design with far fewer tensor cores – NVIDIA's RTX technology all but guarantees that at least some tensor cores will show up in consumer parts – and with a GDDR controller, at which point it raises the question how much of Volta was optimized for tensor core operations.

As our first analysis of DL performance of any GPU, we have not yet determined a standard set of benchmark tests, particularly due to Volta’s unique tensor cores and mixed precision capability. For this Titan V deep dive, we will be utilizing Baidu DeepBench, as well as tests from NVIDIA’s Caffe2 Docker image, Stanford DAWNBench implementations, and HPE Deep Learning Benchmark Suite (DLBS).

But before we dive into the numbers, this is an opportune time to provide some context, of which there is plenty: deep learning and GPUs, the Volta microarchitecture, and the current state of benchmarking DL performance.