Western Digital's ​Microwave Assisted Magnetic Recording (MAMR) drives use platters very similar to those in the current-generation PMR drives*. This means that the innovation to enable MAMR is mainly to do with the heads that perform read and write operations.

As part of the MAMR design, WD pointed out to its shift to the damascene process for building the bit grains as the key enabler for the MAMR breakthrough. The process allows them to fabricate a spin torque oscillator (STO) capable of creating precise energy fields without any additional overheads. The embedded oscillator in the head is tuned to generate microwaves with a frequency of 20-40 GHz, and this provides the 'energy-assist' to make it easier to write to the bits (technically it lowers the coercivity of the underlying recording media).

* Current drives use an aluminium substrate with a cobalt-platinum layer. 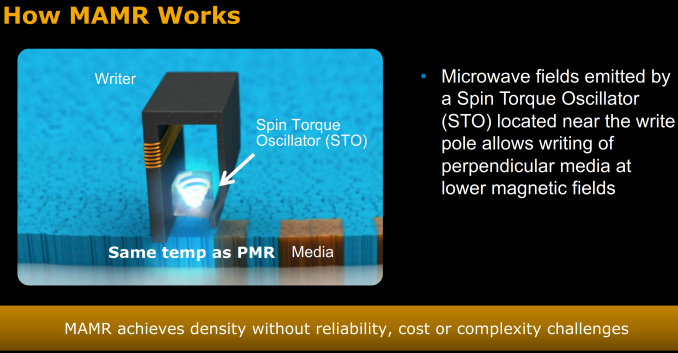 WD  pointed out that MAMR requires absolutely no external heating of the media that could lead to reliability issues. The temperature profiles of MAMR HDDs (both platters and drive temperature itself) are expected to be similar to those of the current generation HDDs. It was indicated that the MAMR drives would meet all current data center reliability requirements.

Based on the description of the operation of MAMR, it is a no-brainer that HAMR has no future in its current form. Almost all hard drive industry players have a lot more patents on HAMR compared to MAMR. It remains to be seen if the intellectual property created on the HAMR side is put to use elsewhere. 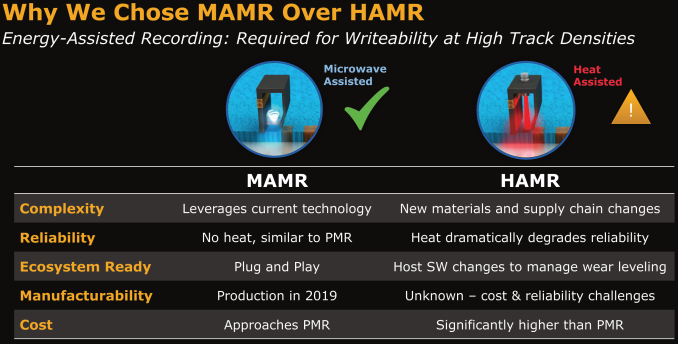 Western Digital has talked about timeframes for the introduction of MAMR drives. They had working prototypes on display at the press and analyst event yesterday. WD's datacenter customers have their own four to six month qualification cycle, and MAMR drives for that purpose are expected to be out towards the middle of next year. Production-level HDDs based on MAMR technology are expected to start shipping in 2019.

Western Digital sees plenty of value in MAMR, and it is not hard to see why. MAMR technology allows for the bit densities of individual platters to scale to more than 4 Tb/sq.in. WD believes that it is well-positioned to bring 40TB drives by 2025 using MAMR alone. 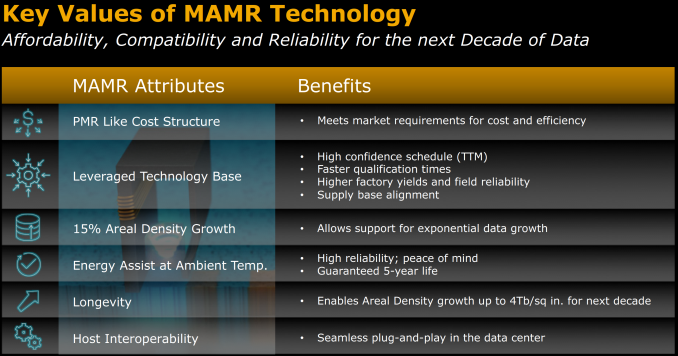 Technologies such as SMR and TDMR are complementary to MAMR. Currently, WD does not use TDMR in any shipping enterprise drive, and SMR is restricted to a few host-managed models. It is possible that some MAMR drives will use those technologies to achieve higher capacity points compared to conventional drives. WD's working prototype on display was a helium drive (HelioSeal), but, WD again stressed that helium is not a compulsory requirement for MAMR drives. It was also confirmed that drives of 16TB and more would have to be MAMR-based.

In 2005, when the shift from longitudinal recording to PMR happened, most vendors managed to release drives based on the new technology within a few years of each other. The shift to helium in 2012, though expected by everyone in the industry, proved to be a big win for HGST - they had the markets that focus on high-capacity, or low-power, or low TCO to themselves for almost three years before Seagate eventually caught up. Toshiba is yet to release a helium drive publicly. It is going to be interesting to see how Seagate and Toshiba respond to this unexpected MAMR announcement from Western Digital. 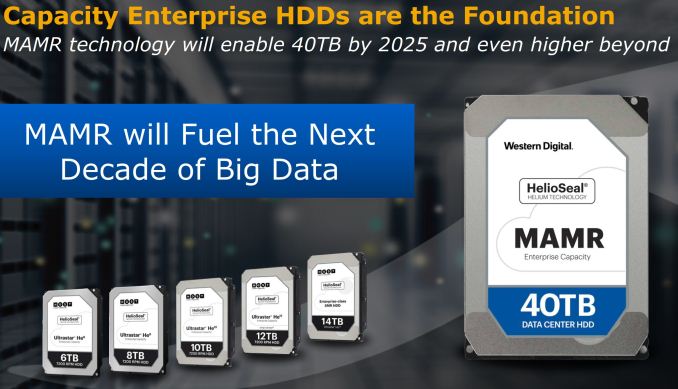 The players in the hard drive industry have a robust cross-licensing program, and it is highly likely that other manufacturers will not face significant patent bottlenecks in bringing out MAMR drives on their own. WD stressed that the development is a multi-year effort, particularly if the heads are still being manufactured in the old dry pole process.

High-volume mature hard drives are often manufactured with the help of third-party suppliers - such as Showa Denko for the recording media and TDK for the heads. In the case of the MAMR drives, WD mentioned that all the components are being designed and manufactured in-house. It is possible for the competition to catch up faster if some of the third-party manufacturers are further along in their own R&D. In particular, TDK has been investing in MAMR R&D recently too. Toshiba has also shown interest in the same, but it is not clear how far along they are in the commercial development cycle. Currently, we believe WD has a clear lead in MAMR technology. It just remains to be seen how long it takes for the competition to catch up.