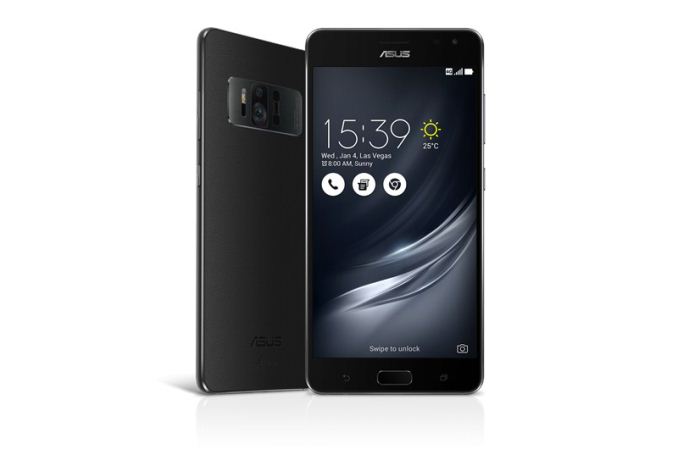 ASUS recently announced two new smartphones: the ZenFone AR and ZenFone 3 Zoom. Each phone has an array of cameras that provide advanced imaging features such as simulated depth of field and augmented reality (AR).

The ZenFone AR is the first smartphone that supports both Google’s Tango AR technology and Daydream VR. Tango, which has been in development for some time and recently debuted in Lenovo’s Phab 2 Pro, gives the ZenFone AR motion tracking, depth perception, and environment mapping capabilities, allowing you to do things like measure physical objects, play new interactive games, or view maps and other relevant data overlaid on the environment shown on the phone’s 5.7-inch QHD SAMOLED screen.

The phone’s AR and imaging experiences are enabled by ASUS’ TriCam system that combines a motion tracking camera, a depth camera that’s paired with an infrared illuminator, and a 23MP Sony IMX318 Exmor RS primary camera paired with an f/2.0 lens. It also has 4-axis OIS to help steady the camera during long exposures, a color spectrum sensor to improve white balance accuracy, and a hybrid autofocus system that combines dual-pixel phase detection (2PDAF), laser, and contrast based AF that should provide good performance in a range of lighting conditions. ASUS claims the camera can focus in as little as 0.03 seconds in ideal conditions. The front camera uses an 8MP sensor and includes its own LED selfie flash.

Inside the ZenFone AR is a Snapdragon 821 SoC that includes two of Qualcomm’s custom Kryo CPU cores running at up to 2.35GHz and another two Kryo cores that can reach 2.19GHz. The Hexagon DSP provides the six degree of freedom position tracking used by Tango. Because of the high demands placed on all the processors inside the SoC (CPU, GPU, DSP, ISP) when running AR and VR applications, the ZenFone AR includes a heat pipe to help keep things cool. It will be interesting to see how this cooling solution works and if it proves sufficient to keep the SoC from throttling during heavy use.

The SoC is paired with either 6GB or 8GB of RAM. There’s also several internal storage tiers starting at 32GB and ranging all the way up to 256GB, with the option to expand storage further with a microSD card. It only comes with a 3300mAh battery, however, which seems a bit small for a 5.7-inch phone that’s intended to run power-hungry VR/AR applications.

The aluminum frame has chamfered edges around the front and back. A power button and volume rocker are on the right edge, while the USB Type-C port, 3.5mm headphone jack, and single downward-firing speaker are all located on the bottom edge. The back is covered in charcoal-colored leather, with the serious-looking camera module with a stainless steel surround being the dominant feature. The front is covered edge-to-edge with Gorilla Glass 4. The pill-shaped home button doubles as a capacitive fingerprint sensor and is flanked by capacitive back and recent apps buttons.

The ZenFone 3 Zoom does not support Tango or Daydream. Instead it focuses exclusively on photography. It uses two rear cameras with different focal lengths to provide what ASUS calls 2.3x optical zoom. This does not work like a true zoom lens, however, which can smoothly adjust focal length between its extreme settings. The ZenFone 3 Zoom simply switches between the two cameras in addition to performing digital zoom. 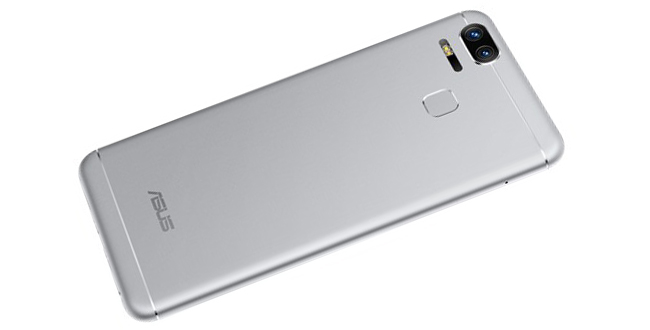 The wide angle camera has a 25mm equivalent focal length that captures a wider field of view but makes objects appear smaller and farther away than they appear to the naked eye. The zoom camera has a 59mm equivalent focal length that makes objects appear slightly larger and closer relative to what your eye sees but has a more restricted field of view. Having a second camera without a wide angle lens is actually very useful in many situations. This approach is similar to what Apple used for the iPhone 7 Plus’ dual camera system.

The wide angle camera uses a 12MP Sony IMX362 Exmor RS sensor with large 1.4µm pixels. It has a six element lens with a large f/1.7 aperture that lets more light reach the sensor, boosting low-light image quality. It also includes OIS and a color spectrum sensor like the ZenFone AR, along with the same hybrid autofocus system that combines dual-pixel phase detection (2PDAF), laser, and contrast based AF. The zoom camera, which has a five element lens array, also uses a 12MP sensor; however, ASUS didn’t provide any further details, so it’s not clear if it also has OIS and the same hybrid AF system. There’s also a 13MP selfie camera that uses the screen for a flash. 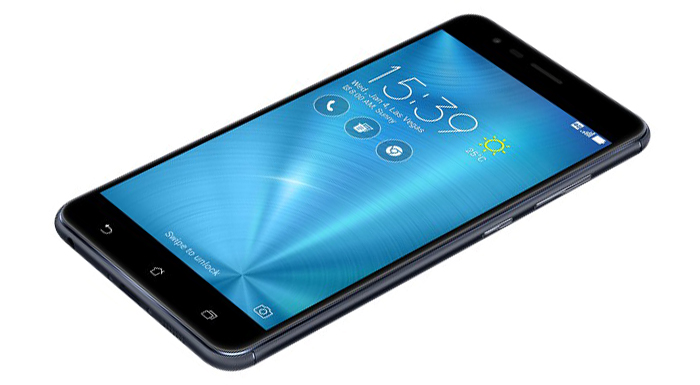 The ZenFone 3 Zoom makes due with a Qualcomm Snapdragon 625 SoC that has an octa-core Cortex-A53 CPU running at up to 2.0GHz. It also has half the amount of RAM as the ZenFone AR, with 3GB or 4GB options available. You can also choose between 32GB, 64GB, or 128GB of internal storage that’s expandable via microSD.

Besides the dual rear camera, the ZenFone 3 Zoom’s other standout feature is its large 5000mAh battery, which, when combined with the Snapdragon 625 and its A53 CPU cores on the 14nm LPP FinFET node, should deliver excellent battery life. 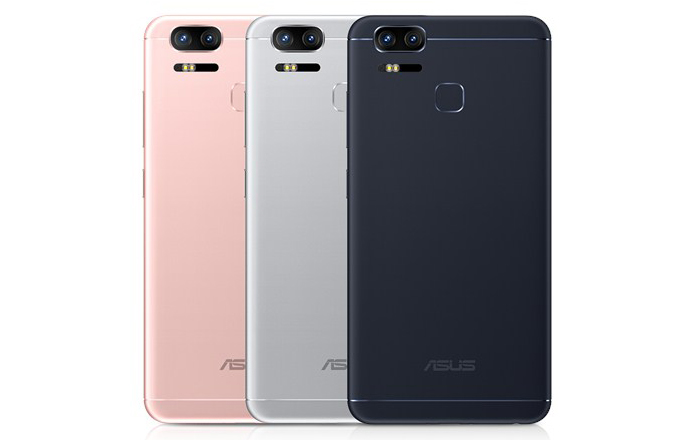 The aluminum uni-body chassis is available in three different colors: Glacier Silver, Navy Black, and Rose Gold. The sides and corners are nicely rounded, similar to the iPhone 7. There’s a color-matching capacitive fingerprint scanner on the back and capacitive navigation buttons on the front below the screen. Gorilla Glass 5 covers the 5.5-inch 1080p SAMOLED display, which ASUS claims reaches a peak brightness of 500 nits.