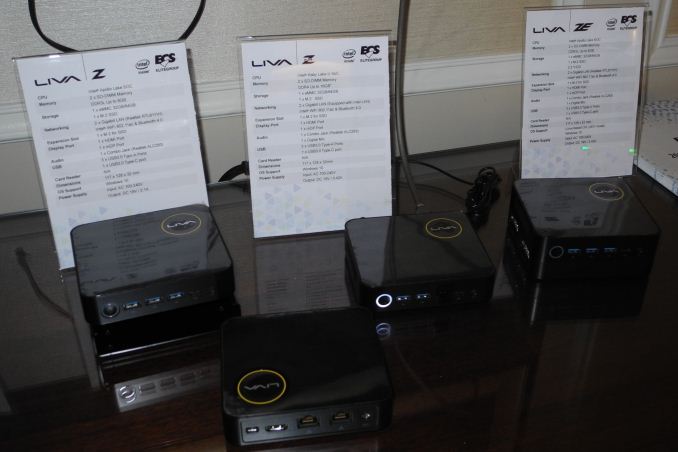 ECS has announced a number of ultra-compact form-factor (UCFF) PCs in the LIVA family at CES 2017. These build upon the success enjoyed by the LIVA brand over the last couple of years. The LIVA Z family being demonstrated at the show has three members - the Z and ZE are based on the Apollo Lake SoC platform, while the Z Plus is based on Kaby Lake-U. Details of the LIVA Z became public in November, and, today, we got the chance to see that, as well as the ZE and Z Plus in action.

The specifications of the three PCs are summarized in the table below. The main differences to note between the Z and ZE models are the availability of four COM ports (RS232) and a 2.5" drive slot in the latter. The Z Plus is a completely different platform.

Traditionally, the LIVA series PCs have had one of the smallest footprints of all the mini-PCs belonging to the UCFF category. With the new Z-series LIVAs, ECS seems to have gone in for slightly larger PCBs (115 x 111mm, as compared to 101.6 x 101.6mm for the NUCs). Fortunately, the larger footprint has enabled ECS to put in dual LAN ports in all the models.

The Z Plus needs a 65W adapter due to the 15W Kaby Lake-U processor. The ZE, despite sharing the same platform as the Z for the most part, needs more power for the 2.5" drive.

ECS folks at the suite were not able to confirm whether the Z-Plus has a LSPCon for HDMI 2.0 / 4Kp60 output and HDCP 2.2 support. This is essential for using the Z Plus as a 4K OTT streaming box with 4K Netflix support. We should be getting confirmation sometime next week, and we eventually plan to post a hands-on review when the unit releases towards the end of this quarter.

On the other hand, the four COM ports in the LIVA ZE as well as its fanless nature should lend itself to industrial use-cases.

The industrial design and I/O organization for the LIVA Z and LIVA Z Plus are quite similar, as can be seen in the above galleries. The ZE model is thicker, as it has to accommodate four extra COM ports as well as a 2.5" drive slot inside the chassis.

In addition, ECS also announced the LIVA XE, an upgrade over the existing LIVA x2 (which uses an Intel Celeron N3050 SoC). The LIVA XE uses a Celeron J3060, which has a higher burst clock. The form-factor and I/Os are similar, except that the XE dispenses with the digital microphone input.

ECS also showed off some of their latest motherboards in the suite. These included the B350AM4-M uATX board with the AMD B350 chipset, and a couple of Z270 boards ith Intel Optane support.