The N2310 package promotes the ease of setup, remote access and value propositions as key points of the unit. In addition to the main chassis (which is surprisingly well constructed for a budget unit), we have a 6 ft. RJ-45 cable, hard drive mounting screws, a quick setup guide, a 40 W (12V DC @ 3.33 A) adapter and a power cord customized to the country of sale. 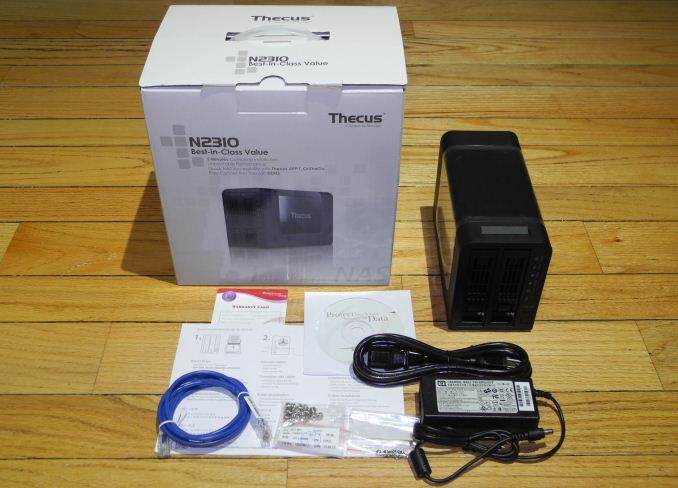 The front face of the unit has two physical buttons (one for power control and one for USB copy) and a host of LEDs for power, disk and network status. On the rear side, we have a USB 2.0 and a USB 3.0 port, a RJ-45 port, a recessed reset button and a power inlet. A Kensington security slot is also available.

The N2310 is based on the Applied Micro's APM 86491 SoC. We covered the launch of the 'Catalina' platform based on this SoC back in January 2012. With a PowerPC 465 core running at 800 MHz, the SoC boasts of a host of accelerators aimed at reducing the CPU load for NAS applications. 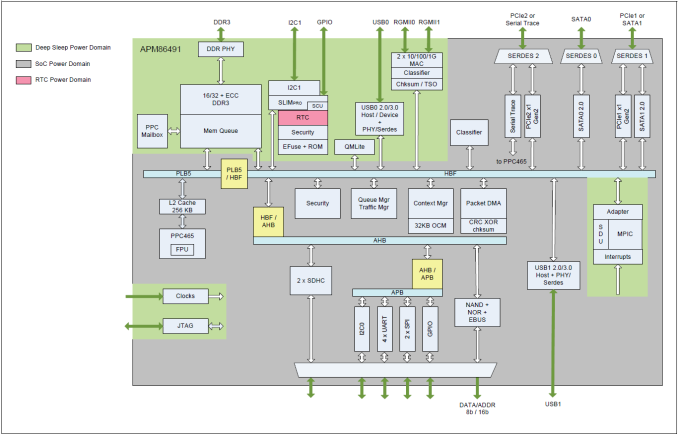 From the block diagram above, it is clear that we don't need any bridge chips to enable the various ports of the N2310. The USB 2.0 and USB 3.0 ports are directly off the SoC, and SERDES1 can be used as the second SATA port. There are two RGMII ports available, and only one of them is used for providing network connectivity.

In terms of setup, Thecus targets the entry-level consumers by guiding them through a desktop program (Intelligent NAS) which determines the IP address of the N2310 (assuming a DHCP server is available). The program allows for either manual or automatic RAID creation (sensible choices of RAID 1 for 2 disks and JBOD for 1 disk). In case of existing partitions, the program helpfully indicates the issue to the user before allowing for format of the disks. As a final step, the program also provides a facility to associate / create a Thecus ID to use in conjunction with the N2310. This ID enables the creation of a DDNS address and use of the T-OnTheGo mobile apps.

The web user interface has not really changed much since we reviewed the Thecus N2560 last year. A walk-through of the available features in the web UI is provided in the gallery below.

One of the most important apps available for the N2310 is Plex Media Server. In our limited testing, it works pretty well, as long as there aren't any transcoding requirements. One of the major drawbacks of the Thecus OS is the fact that RAID migration from JBOD to RAID-1 is not available. So, we started our evaluation with two disks in RAID-1. Fortunately, hot-swap and RAID recovery worked very well (in fact, this is the first Thecus NAS that we have reviewed where the rebuild process worked without a hitch). However, other professional reviewers online don't seem to have had the same luck.

Considering the target market, Thecus removed the iSCSI functionality as well as encryption capabilities from the OS. Given the price point, we believe Thecus is justified in doing so.