As I mentioned at the beginning of this review, I’m a fan of Chrome OS. The OS isn’t flexible enough to function as a replacement for my needs, but for someone who basically needs a terminal to Gmail, Facebook and the internet in general - Chrome OS shows extreme promise.

The learning curve is an issue. As is the fact that there’s no elegant handling for dealing with files you might download. Windows executables obviously won’t run, but things like archives are a mixed bag. Zip files are fine, but if you come across a 7zip archive you’re out of luck. Google has been slowly improving Chrome’s thick client, offline app story but there’s still room to grow. What Chrome OS really needs is the equivalent of the Play Store to fill in the gaps where running something in a browser doesn’t make the most sense. 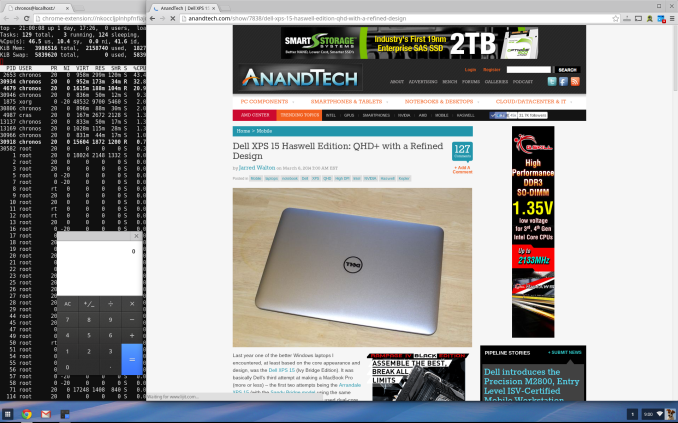 Unlike most platforms with promise, Chrome OS is quite usable today. Assuming everything you need is available through a web browser (without any OS specific plugins), Chrome OS delivers an excellent, albeit limited, experience.

Just like mobile Chromebooks, ASUS’ Chromebox features a recovery mode button. Above the Kensington secure slot is a small button. Depress the recovery mode button while powering on the machine and you’ll be presented with the standard Chrome OS recovery screen. Hit CTRL + D at this screen and you’ll wipe the machine and restart with dev mode enabled. For whatever reason, my review sample shipped with dev mode already enabled and I wasn’t able to revert so I can’t really provide screenshots of the process. 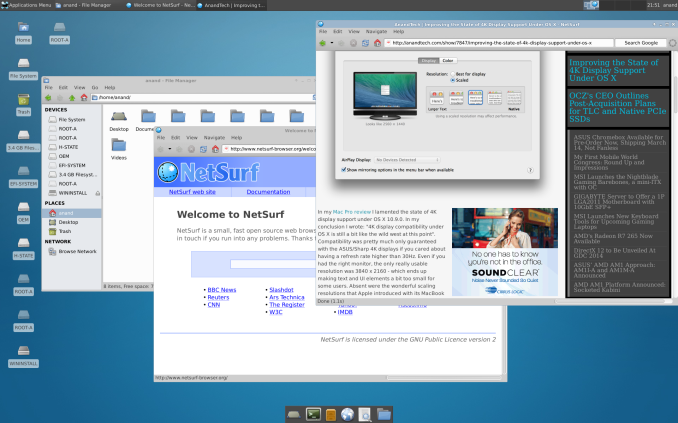 With dev mode enabled, I had no issues installing Crouton. By default the machine won’t boot off of any external USB devices, however in dev mode you can run crossystem dev_boot_legacy=1 which should enable USB boot to things like Ubuntu. Just hit CTRL + L at the recovery mode screen after you’ve made the change.

The internal EFI doesn’t support booting to Windows, so anyone looking to turn this into a cheap Windows box is likely out of luck. The Windows lockout is likely Google’s doing as the company is specifically looking to replace low end Windows PCs.

The entry level $179 Chromebox features a Celeron 2955U. This is a dual-core Haswell based Celeron running at up to 1.4GHz. For an entry level Windows PC I’d argue that the Celeron 2955U isn’t fast enough, but for a machine running Chrome OS it’s actually almost perfect. Heavy multitasking with many Chrome tabs/windows open, even playing multiple YouTube videos at the same time didn’t impact the user experience at all. I can get lazy about managing Chrome tabs, and even without actively closing down things I didn’t need open the machine never slowed down. The Chromebox never felt like it was a $179 machine, it was always fast and snappy during my use.

I ran a bunch of 1080p YouTube playback tests. Hardware acceleration was enabled and I never saw any dropped frames during active playback. YouTube did drop frames if I had a 1080p video running on a hidden tab if I was doing heavy work in foreground Chrome windows/tabs, but never when I was actually watching the video.

I ran through a few web based tests, and obviously the Chromebox’s performance here is great. I included some recent Chromebook numbers as a comparison point, and without a doubt the Chromebox is quick. This data really just validates by user experience anecdotes above - for its intended use, the Chromebox delivers excellent performance. 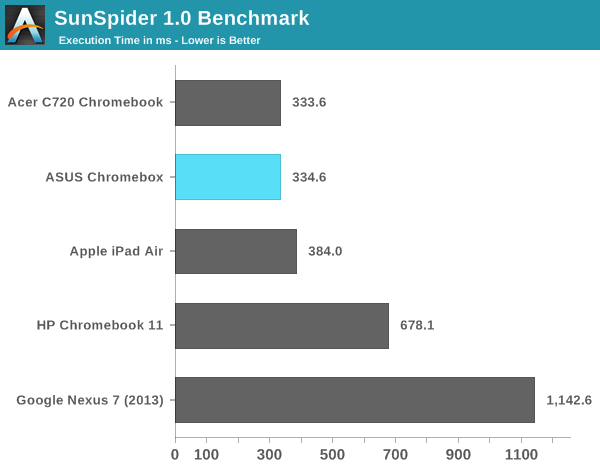 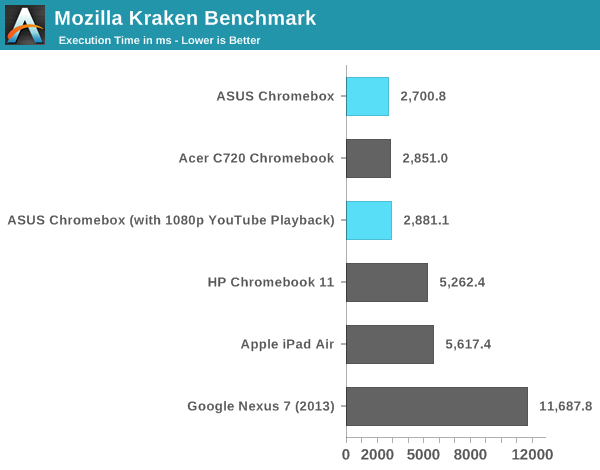 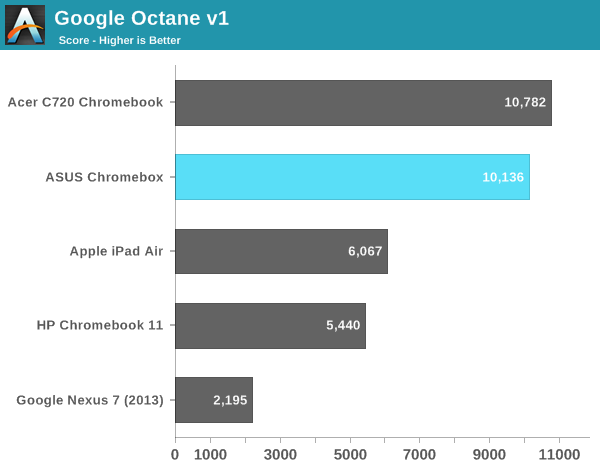 I also tried playing back some offline H.264 content. The experience was remarkably good for most of what I encountered, even high bitrate 1080p content. I did notice some videos had difficulty playing without dropping frames but I couldn’t correlate the issues with video decode bitrate (e.g. high bitrates didn’t necessarily cause dropped frames).

Great performance given the workload is one thing, but we often see inordinately high power consumption from small form factor desktops as many OEMs aren’t as focused on driving low power consumption. Thankfully that isn’t the case for ASUS’ Chromebox. I measured total power consumption of the system at the wall while running a number of workloads. At idle the entire system consumed under 7W, and running any single web workload I didn’t see power consumption beyond 12W. Powering an external USB SSD drove power consumption up a little more but everything was quite sane. 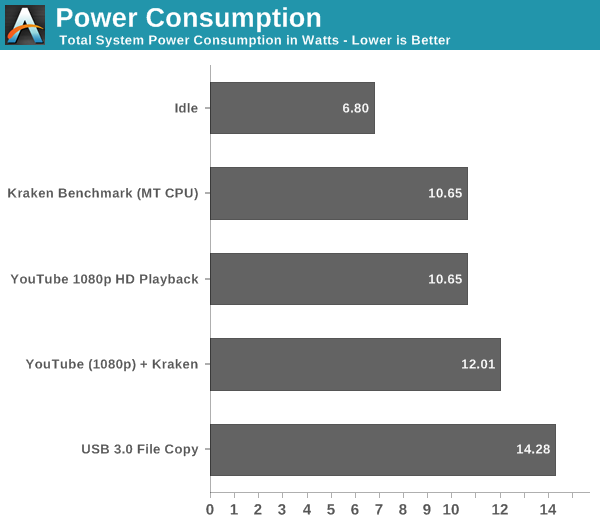 At $179 ASUS’ Chromebox is an excellent entry level, small form factor desktop PC. Unlike other solutions in this new small form factor desktop space, the Chromebox comes fully functional out of the box. You get WiFi, solid state storage, DRAM, CPU and an OS all ready to go. The result is a great balance of price, performance and usability. ASUS' Chromebox is an affordable desktop that feels much faster than its pricetag would otherwise imply.

A huge part of the Chromebox’s success is due to Google’s Chrome OS. Make no mistake, this isn’t a replacement for every single entry level desktop user on the market. You need to have a workload that can live almost exclusively within the confines of a web browser. That means relying on Google Docs instead of Microsoft Office, and Gmail’s web interface instead of Outlook. The good news is that Google’s online services tend to be really good. Google Docs is an excellent alternative to Office, particularly for light use cases, and Gmail’s web interface does better than many offline email clients. Facebook, Twitter and streaming music/video services are all easily accessible from within a Chrome browser window. 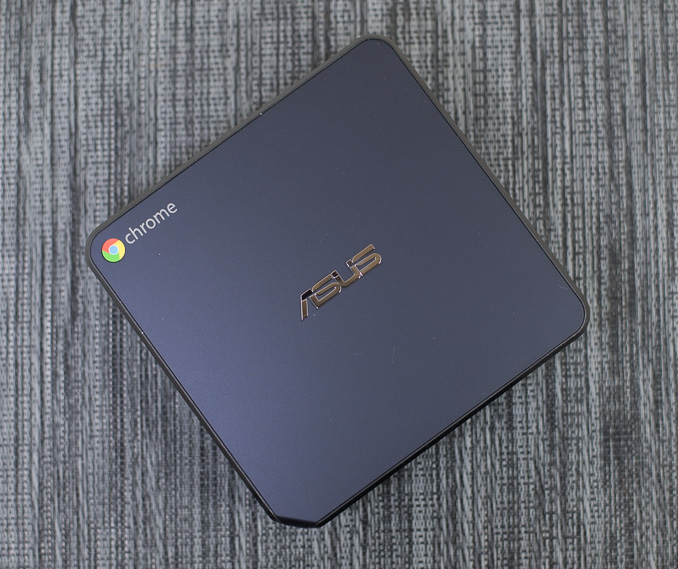 You lose out on the ability to open a lot of what you may come across on the web. Windows executables are out, as are some file archives. Downloaded movies may need to be transcoded depending on what codecs they use. The Chromebox and Chrome OS definitely aren't for everyone. More traditional users may find that Chrome OS is simply too limiting. However, those who have limited needs can quickly feel right at home.

What Chrome OS makes you sacrifice in flexibility, you gain in security. The relative immunity to viruses and malware makes the Chromebox an easy platform to recommend to novice users that are up for a somewhat unique learning curve.