The ARM Diaries, Part 2: Understanding the Cortex A12

A couple of weeks ago I began this series on ARM with a discussion of the company’s unique business model. In covering semiconductor companies we’ve come across many that are fabless, but it’s very rare that you come across a successful semiconductor company that doesn’t even sell a chip. ARM’s business entirely revolves around licensing IP for its instruction set as well as its own CPU (and now GPU and video) cores.

Before we get into discussions of specific cores, it’s important to talk about ARM’s portfolio as a whole. In the PC space we’re used to focusing on Intel’s latest and greatest microarchitectures, which are then scaled in various ways to hit lower price targets. We might see different core counts, cache sizes, frequencies and maybe even some unfortunate instruction set tweaking but for the most part Intel will deliver a single microarchitecture to cover the vast majority of the market. These days, this microarchitecture is simply known as Core.

Back in 2008, Intel introduced a second microarchitecture under the Atom brand to target lower cost (and lower power) markets. The combination of Atom and Core spans the overwhelming majority of the client computing market for Intel. The prices of these CPUs range from the low double digits with Atom to many hundreds of dollars for the highest end Core processors (the most expensive desktop Haswell is $350, however mobile now extends up to $1100). There are other designs that target servers (which are then repurposed for ultra high-end desktops), but those are beyond the scope of this discussion for now.

If we limit our discussion to personal computing devices (smartphones, tablets, laptops and desktops), where Intel uses two microarchitectures ARM uses three. The graphic below illustrates the roadmap: 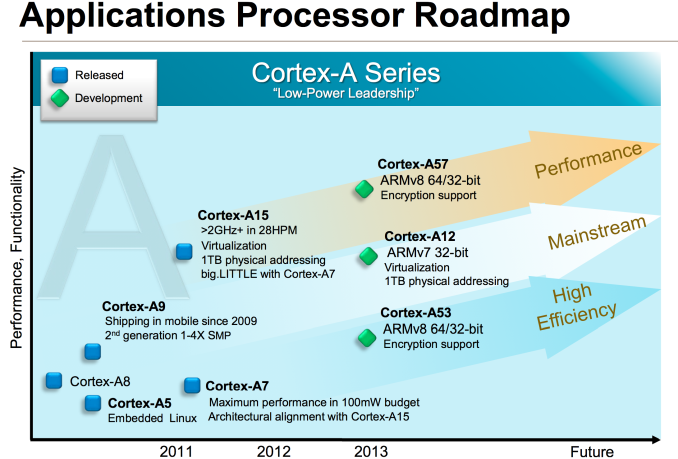 You need to somewhat ignore the timescale on the x-axis since those dates really refer to when ARM IP is first available to licensees, not when products are shipping to consumers, but you get an idea for the three basic vectors of ARM’s Cortex A-series of processor IP. Note that there are also Cortex R (embedded) and Cortex M (microcontroller) series of processor IP offered as well, but once again those are beyond the scope of our discussion here.

If we look at currently available cores, there’s the Cortex A15 on the high end, Cortex A9 for the mainstream and Cortex A7 for entry/low cost markets. If we’re to draw parallels with Intel’s product lineup, the Cortex A15 is best aligned with ultra low power/low frequency Core parts (think Y-series SKUs), while the Cortex A9 vector parallels Atom. Cortex A7 on the other hand targets a core size/cost/power level that Intel doesn’t presently address. It’s this third category labeled high efficiency above that Intel doesn’t have a solution for. This answers the question of why ARM needs three microarchitectures while Intel only needs two: in mobile, ARM targets a broader spectrum of markets than Intel.

If you’ve read any of our smartphone/tablet SoC coverage over the past couple of years you’ll note that I’m always talking about an increasing dynamic range of power consumption in high-end smartphones and tablets. Each generation performance goes up, and with it typically comes a higher peak power consumption. Efficiency improvements (either through architecture, process technology or both) can make average power in a reasonable workload look better, but at full tilt we’ve been steadily marching towards higher peak power consumption regardless of SoC vendor. ARM provided a decent overview of the CPU power/area budget as well as expected performance over time of its CPU architectures: 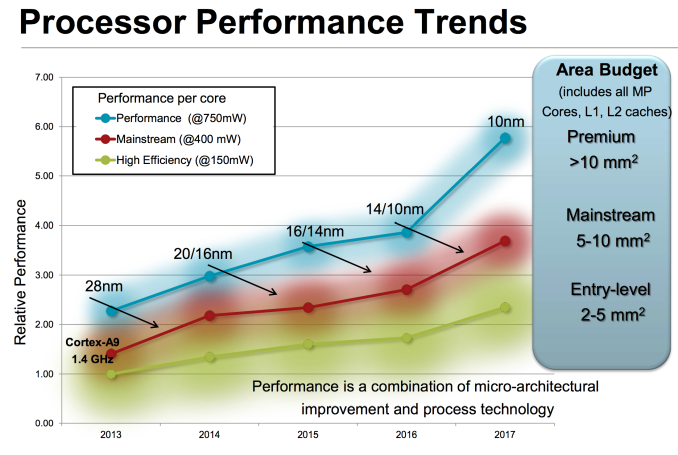 Looking at the performance segment alone, we’ll quickly end up with microarchitectures that are no longer suited for mobile, either because they’re too big/costly or they draw too much power (or both).

The performance vector of ARM CPU IP exists because ARM has its sights set higher than conventional smartphones. Starting with the Cortex A57, ARM hopes to have a real chance in servers (and potentially even higher performance PCs, Windows RT and Chrome OS being obvious targets).

Although we see limited use of ARM’s Cortex A15 in smartphones today (some international versions of the Galaxy S 4), it’s very clear that for most phones a different point on the power/performance curve makes the most sense.

The Cortex A8 and A9 were really the ARM microarchitectures that drove smartphone performance over the past couple of years. The problem is that while ARM’s attentions shifted higher up the computing chain with Cortex A15, there was no successor to take the A9’s place. ARM’s counterpoint would be that Cortex A15 can be made suitable for lower power operation, however its partners (at least to date) seemed to be focused on extracting peak performance from the A15 rather than pursuing a conservative implementation designed for lower power operation. In many ways this makes sense. If you’re an SoC vendor that’s paying a premium for a large die CPU, you’re going to want to get the most performance possible out of the design. Only Apple seems to have embraced the idea of using die area to deliver lower power consumption.

The result of all of this is that the Cortex A9 needed a successor. For a while we’d been hearing about a new ARM architecture that would be faster than Cortex A9, but lower power (and lower performance) than Cortex A15. Presently, the only architecture in between comes from Qualcomm in the form of some Krait derivative. For ARM to not let its IP licensees down, it too needed a solution for the future of the mainstream smartphone market. Last month we were introduced to that very product: ARM’s Cortex A12.

Slotting in numerically between A9 and A15, the initial disclosure unfortunately didn’t come with a whole lot of actual information. Thankfully, we now have some color to add.