You’re going to come across the phrase out-of-order execution (OoOE) a lot here, so let’s go through a quick refresher on what that is and why it matters.

At a high level, the role of a CPU is to read instructions from whatever program it’s running, determine what they’re telling the machine to do, execute them and write the result back out to memory.

The program counter within a CPU points to the address in memory of the next instruction to be executed. The CPU’s fetch logic grabs instructions in order. Those instructions are decoded into an internally understood format (a single architectural instruction sometimes decodes into multiple smaller instructions). Once decoded, all necessary operands are fetched from memory (if they’re not already in local registers) and the combination of instruction + operands are issued for execution. The results are committed to memory (registers/cache/DRAM) and it’s on to the next one.

In-order architectures complete this pipeline in order, from start to finish. The obvious problem is that many steps within the pipeline are dependent on having the right operands immediately available. For a number of reasons, this isn’t always possible. Operands could depend on other earlier instructions that may not have finished executing, or they might be located in main memory - hundreds of cycles away from the CPU. In these cases, a bubble is inserted into the processor’s pipeline and the machine’s overall efficiency drops as no work is being done until those operands are available.

Out-of-order architectures attempt to fix this problem by allowing independent instructions to execute ahead of others that are stalled waiting for data. In both cases instructions are fetched and retired in-order, but in an OoO architecture instructions can be executed out-of-order to improve overall utilization of execution resources.

The move to an OoO paradigm generally comes with penalties to die area and power consumption, which is one reason the earliest mobile CPU architectures were in-order designs. The ARM11, ARM’s Cortex A8, Intel’s original Atom (Bonnell) and Qualcomm’s Scorpion core were all in-order. As performance demands continued to go up and with new, smaller/lower power transistors, all of the players here started introducing OoO variants of their architectures. Although often referred to as out of order designs, ARM’s Cortex A9 and Qualcomm’s Krait 200/300 are mildly OoO compared to Cortex A15. Intel’s Silvermont joins the ranks of the Cortex A15 as a fully out of order design by modern day standards. The move to OoO alone should be good for around a 30% increase in single threaded performance vs. Bonnell. 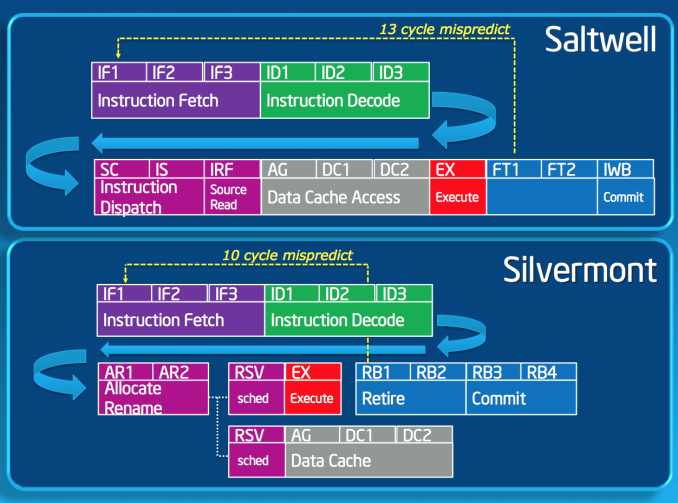 Silvermont changes the Atom pipeline slightly. Bonnell featured a 16 stage in-order pipeline. One side effect to the design was that all operations, including those that didn’t have cache accesses (e.g. operations whose operands were in registers), had to go through three data cache access stages even though nothing happened during those stages. In going out-of-order, Silvermont allows instructions to bypass those stages if they don’t need data from memory, effectively shortening the mispredict penalty from 13 stages down to 10. The integer pipeline depth now varies depending on the type of instruction, but you’re looking at a range of 14 - 17 stages.

Couple better branch prediction with a lower mispredict latency and you’re talking about another 5 - 10% increase in IPC over Bonnell.