Next year is looking to be a very important year for smartphone and tablet performance. Just as we saw widespread migration to the ARM Cortex A8 and Qualcomm Scorpion CPU cores in smartphones in 2010, in the next 12 months we will see the first tablets and smartphones based on dual-core SoCs from TI, Qualcomm and NVIDIA. The long awaited Tegra 2 will start shipping in smartphones and tablets in early 2011, and Qualcomm will have its own 45nm dual-core Snapdragon SoCs featured in devices as well. Today TI is announcing more details on its OMAP 4440, a high performance dual-core Cortex A9 SoC slated for production in the second half of 2011.

The OMAP 4430 is a 45nm SoC expected to replace the current 3630 and 3430 used in high end smartphones today. The 3630 will move further downstream and exist within more mainstream smartphones. 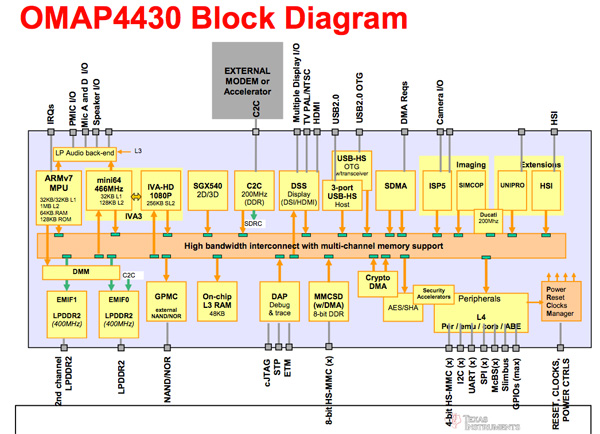 The 4430 features a pair of ARM Cortex A9s running at 1GHz with a PowerVR SGX 540 GPU from Imagination Technologies. The Cortex A9 features a shorter pipeline than the current A8 and Scorpion cores and thus should boast a higher IPC. It also enables some amount of out-of-order execution.

The A9 cores share a 1MB L2 cache and are paired with two 32-bit LPDDR2 memory controllers. The memory bus can support LPDDR2 devices at data rates up to 400MHz. This gives the OMAP 4430 the potential to offer 4x the memory bandwidth of the 3630, which means better CPU and GPU performance as well as more flexibility with video.

The architectural improvements should result in significant performance gains in everything from OS interaction to web browsing. We’ve already seen real world improvements as high as 50% vs. existing A8/Snapdragon platforms.

The PowerVR SGX 540 GPU is used in Samsung’s Hummingbird SoC, which we’ve seen in the Galaxy S line of smartphones. This is already the fastest ultra mobile GPU we’ve tested, so its well suited for use in the 4430.

Today’s announcement isn’t about the 4430 however, it’s about the 4440. A higher performance OMAP4 variant, the 4440 is still built on a 45nm process, it still features a pair of Cortex A9s and a PowerVR SGX 540 GPU - but it just runs faster.

The A9s run at 1.5GHz and although TI isn’t announcing the SGX 540’s clock speed, it promises a 25% increase in overall graphics performance (triangle rate, fill rate). Presumably the GPU is clocked 25% higher than in the 4430 (which could be as high as 400MHz).

There are more video features on the 4440 as well. You get 60 fps 1080p decode support (bitrate limitations aren't completely fleshed out, but TI has some details in a whitepaper- PDF link), and the SoC supports up to two 12-megapixel camera sensors (potentially for use in high resolution stereoscopic 3D photography). HDMI 1.4 and stereoscopic 3D are also supported by the SoC.