Earlier this year, AMD launched its Zen 3 based desktop processor solutions with integrated graphics. Marketed as the Ryzen 5000G family, these processors are the latest offering to combine AMD’s high-performing Zen 3 cores with tried-and-tested Vega 8 graphics, all built on TSMC’s 7nm process. As desktop processors, AMD made them available to system builders for a few months, allowing the company to keep track of stock levels and have a consistent demand during a high-demand phase for silicon. But on August 5th, they will be made available to buy at retail, and we’ve got the most important models to test.

AMD actually came to market with its Zen 3-based integrated graphics silicon back in December 2020. The Cezanne silicon, with eight Zen 3 cores and up to Vega 8 graphics, was first earmarked for laptop use. We saw it come to market in that fashion for the 15 W and 45 W segments, and tested it in the ASUS ROG Flow X13 laptop in a 35 W variation, paired with a discrete graphics card.

As a mobile chip in both low power and high power segments, it had to do duty as both a processor and graphics at 15 W, but mainly as a processor at 45 W powering a discrete graphics card. For the desktop processors, AMD cranks up the power even more to 65 W, where it is expected to perform either as a good CPU powering a GPU, or as an integrated graphics solution and do everything.

The Ryzen 5000G processor series is an upgrade over last year’s Ryzen 4000G processor series. AMD co-designed both of these processor families to re-use key parts of the chip design, enabling a fast time-to-market and quicker upgrade cycle for AMD’s partners (OEMs), like Dell, HP, Lenovo, and others. The biggest re-use between the two families is the graphics, which has Vega 8 graphics on both, and although there’s a hefty frequency bump for 5000G in mobile, the desktop parts actually see a decline. We expect AMD to have its latest RDNA 2 graphics in its G processors next time around, but for now it stays the same because that helps expedite the design for these processors.

The major difference between the 4000G and 5000G processors is that the new hardware uses eight of AMD’s latest Zen 3 CPU cores, which is an upgrade over the eight Zen 2 cores from last year. The highlight is the +19% raw performance uplift when comparing the two at the same frequency. The second major difference is that the 4000G processors never technically came to retail (but we reviewed them anyway), while AMD is making the Ryzen 7 5700G and Ryzen 5 5600G as individual products that customers can buy.

Under the hood, there are a few more key changes that enthusiasts will be interested in. The 8-core Zen 3 design doubles the L3 cache per core, but also combines it into a single 16 MB L3 cache structure. This enables any of the eight cores to access the full cache, reducing latency to main memory (from 4 MB to 16 MB). The previous design had two clusters of four Zen 2 cores, so while it still had 8 cores, each cluster only had access to 4 MB of L3 cache. This is of sizable importance when it comes to workloads that sit in the 4 MB to 16 MB memory space, such as integrated graphics gaming and discrete graphics.

The new processor is 180 mm2 in size, compared to 156 mm2 of the last generation, but still fits into the same socket. It contains 10.7 billion transistors, which is up from 9.8 billion. This means an effective decrease in transistor density, although we know that Zen 3 cores are slightly larger than Zen 2 cores, and some additional security measures have been added.

There are six desktop processors in this family, and two of them are coming to store shelves.

The top part is a Ryzen 7 5700G, featuring eight cores and sixteen threads, with a base frequency of 3.8 GHz and a turbo frequency of 4.6 GHz. The Vega 8 graphics runs at 2000 MHz, and we get sixteen lanes of PCIe 3.0 for graphics, plus another four for storage and four for the chipset.. TDP of the chip is rated at 65 W, although in most motherboards the Package Power Tracking will bump power up to 88 W. The Ryzen 7 5700G will have an MSRP of $359. 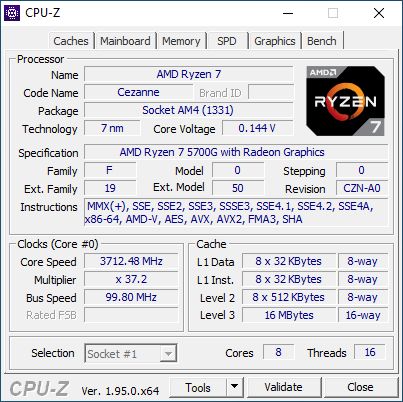 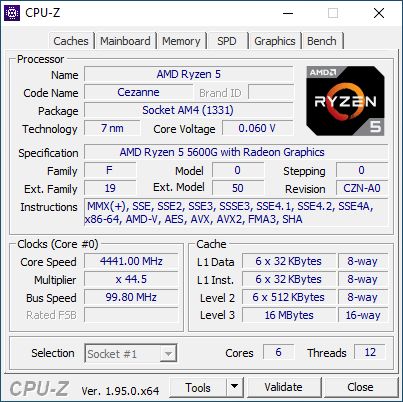 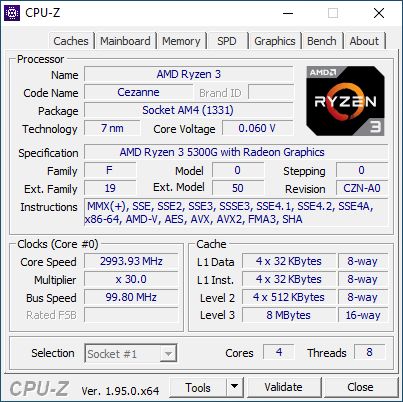 We’re also testing a third part in this review, the Ryzen 3 5300G, which sits near the bottom of the stack. With only four cores and eight threads, up to 4.2 GHz turbo and Vega 6 graphics running at 1700 MHz, this processor contains only half the L3 cache (8 MB total) of the other two. It sounds like it would make a nice $150 processor if it came to retail, and users can pick this processor up on eBay, but it currently it sits at $272 plus shipping, making it more expensive than the 5600G. Nonetheless, as we had tested Ryzen 7/5/3 from the 4000G series, we wanted to compare up against the 5000G to see if this is a line AMD might consider going beyond OEM deployment.

This is ultimately why a staggered launch from laptop to desktop over the course of eight months allows AMD to pitch where its desktop integrated graphics processors should sit in the marketplace. These Cezanne processors use Zen 3 CPU cores, for example, whereas the older ones had Zen 2, Zen+, and Zen before it. What makes these ones different this time around is that AMD is cutting the Ryzen 3 from retail, but the Ryzen 7 at the high-end is now available at retail. The only one that has been consistent is Ryzen 5, and we can compare the Ryzen 5 processors over the years:

AMD has kept the Vega graphics through all four generations, but moved down from the silicon having Vega 11 on 12nm to Vega 8 on 7nm – AMD said that this was because of density increases and finding the right balance, but also the uplift in frequency and power efficiencies the new process node provided. 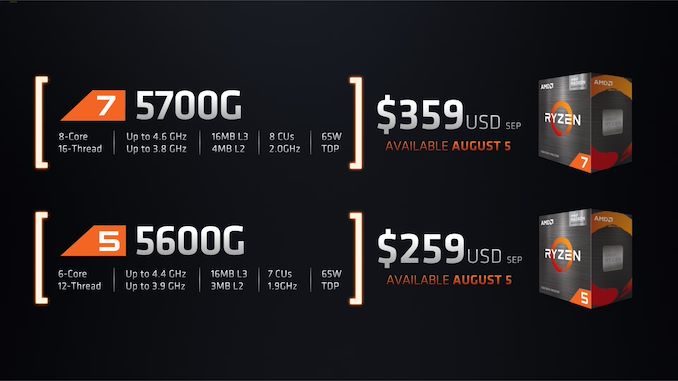 As it stands, these two new processors at retail fill out AMD's retail offerings, at least down to $259. One of the key benefits is that these two new processors are cheaper than the existing CPU-only offerings, but also both come with appropriate coolers when they are run at their default power modes. Otherwise, the most notable differences between AMD's Ryzen 5000 CPUs and 5000G APUs comes down to the APUs only have half as much L3 cache, and of course, the APUs also come with integrated graphics. Given that modern graphics cards don’t even need PCIe 4.0 levels of bandwidth, we have to see if the cache difference and any CPU frequency differences are worth the price difference.

The key thing with the Ryzen 7 comparison is the TDP difference – why the frequency might only be 100 MHz change, at 105 W TDP (or 120W PPT), it will keep its turbo better.

AMD has confirmed that X570, B550, and A520 motherboards will support the new 5000G processors. X470 and B450 motherboards might also be supported, but that depends on the motherboard manufacturer. AMD recommends a BIOS with AGESA version 1203b for full performance.

In this article, we will be testing the Ryzen 7 5700G, Ryzen 5 5600G, and Ryzen 3 5300G on our test suite, covering raw CPU performance, integrated graphics performance, but also performance when paired with a discrete GPU.

We must thank the following companies for kindly providing hardware for our multiple testbeds. Some of this hardware is not in this testbed specifically, but is used in other testing.

A big thanks to ADATA for the ​AD4U3200716G22-SGN modules for this review. They're currently the backbone of our AMD testing.

Read on for the full review.