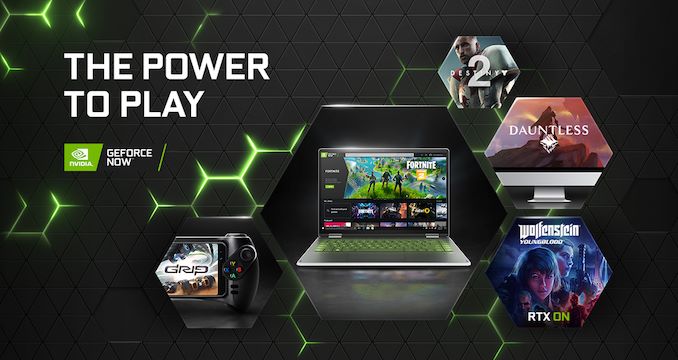 For the last several years, NVIDIA has been dabbling in offering game streaming services. Starting out as GeForce GRID for the controller-shaped SHIELD Portable, the service has morphed over the years in scope and technology. The most recent iteration, GeForce NOW, a multi-platform service, was launched in beta back at the start of 2018. And now, a bit over two years later, NVIDIA is finally taking the service out of beta and is formally launching the commercial GeForce NOW service.

Trying out a number of different strategies over the years in various retoolings, NVIDIA has ultimately settled on an interesting, and for the moment at least, quite unique service offering for their game streaming service. Rather than going with a hybrid subscription model where customers would subscribe to a service, get some games, and get the option of buying more games on that service (ala Google Stadia or Playstation Now), NVIDIA has instead focused purely on providing the infrastructure and streaming services, but not the games. The net result is that GeForce NOW runs on a bring-your-own-games model, where NVIDIA rents out what’s essentially a virtual machine instance on their servers, and gamers can use their Steam/Uplay/Battle.Net/Epic accounts to play games they already own.

NVIDIA has been offering this modern version of the service since early 2018 in the form of a free, waitlisted beta, slowly testing the platform while building up both the number of games and the number of platforms the client is available on. As of today that beta is finally coming to an end, and the service is rolling out in commercial form. Besides the obvious changes of removing the waitlists and charging for it, the shift from a beta to a paid offering won’t radically change the service, but NVIDIA is using the launch to make a few tweaks 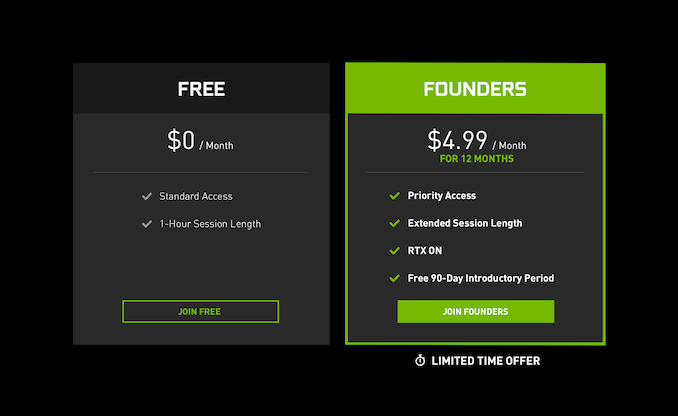 First and foremost, of course, is pricing. Surprisingly, NVIDIA is actually keeping around a free tier of the service – albeit with some restrictions – so there will be two tiers of service. The paid “Founders” tier is the full package, and includes access to NVIDIA’s new RTX servers. Notably there is a maximum session limit of 6 hours, but this seems to be focused more on preventing someone from leaving an instance running all day long with an unattended game than it is about discouraging heavy users.

For now, NVIDIA is seems a bit unsure about where to price the service at. The company is charging $4.99/month for the first 12 months, and to further sweeten the deal, the first three months are free. According to NVIDIA this is a limited time offer, implying that they’re going to be charging more than $4.99/month for regular (Premium) pricing later on, but they don’t seem to know what to charge for the service; so I imagine the subscription numbers they see over the next 12 months will help to decide that. At any rate, the company is launching with the capacity to support 600K simultaneous users, and depending on how the paid service goes, NVIDIA has a definite ambition to further expand that.

Meanwhile, NVIDIA is also keeping a free tier, albeit with much greater restrictions. The free tier has a maximum session length of just 1 hour, and of course, it’s first-come first-serve with free tier users sharing any leftover slots that aren’t already occupied by paying users. Free tier users also won’t have access to RTX features, though I’m curious how much of this is going to be software segmentation (i.e. turning them off), and how much of this is using their older Pascal-based servers for the free tier. At any rate, it’s a bit of a surprise to see the free tier offered even with these restrictions; because NVIDIA offers free-to-play games on GeForce NOW (including the uber popular Fortnite), it’ll be possible to use GeForce NOW without paying a dime for the service or for a game.

Otherwise, it’s worth noting that NVIDIA is being much more conservative about resolutions here. 4K streaming isn’t available for GeForce NOW, even on the paid tier. Instead the service tops out at 1080p60, with NVIDIA recommending a 50Mbps connection for best results. Some of this is going to be due to what the service is running under the hood (more on that in a second), and part of it is for pragmatic reasons: NVIDIA wants to put their best foot forward. And that means emphasizing image quality and things like ray tracing over a higher resolution. 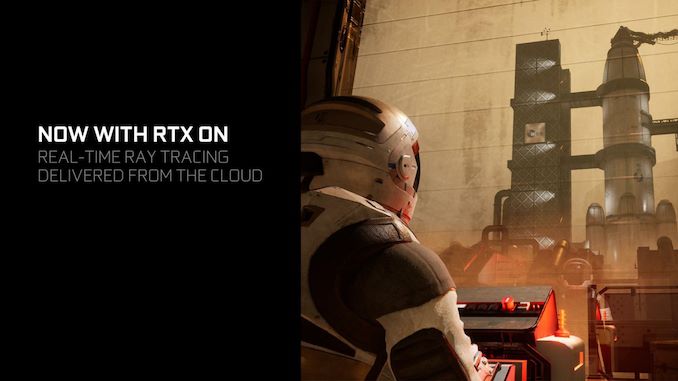 Overall, NVIDIA is promising GeForce RTX 2080-like performance, which would be potent, but would fall short of being able to drive 4K at 60fps in a number of games. So rather than delivering 4K at uneven framerates – an issue that has been widely noted with some games on Google’s Stadia – NVIDIA is keeping things within the realm of what an RTX 2080 can do well.

Under the hood, NVIDIA is, as always, running GeForce NOW on top of Tesla video cards (Digital Foundry spotted both a P40 and a 16GB Tesla T10). For today’s launch the company has upgraded a number of servers to use the newer Turing-based Tesla cards, so today also marks the launch of the first RTX-capable instances on the service. As for how that hardware is being allocated, depending on the game, NVIDIA is either giving a user a whole GPU, or time slicing between two or four users. The most demanding games – mainly those using RTX effects – will get a whole GPU, while other games will get shared instances. 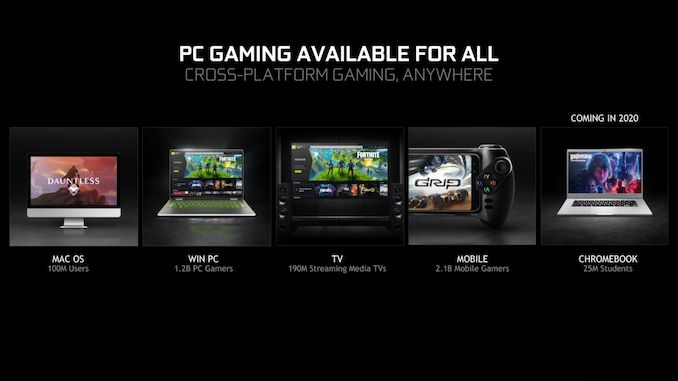 As for the available platforms, NVIDIA is launching with the same platforms as in the previous beta. This means the GeForce NOW client is available for Windows, macOS, and Android (including of course, NVIDIA’s own SHIELD). The company is also announcing that they’ll be bringing the client to Chromebooks, but that client isn’t ready quite yet. 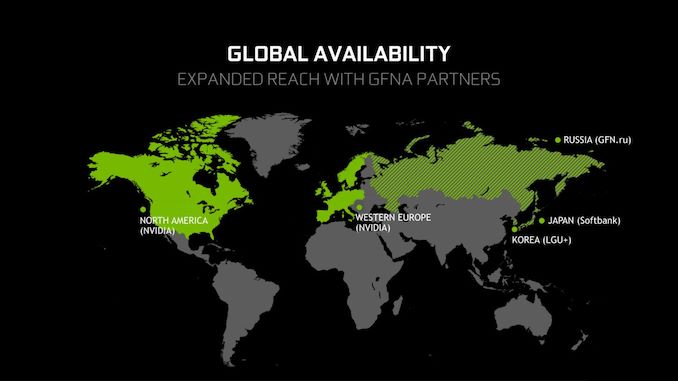 The service availability is also largely unchanged from the beta. NVIDIA is running their own server clusters in North America and Western Europe, with nine sites in North America and six in Europe to try to keep latency down. Meanwhile NVIDIA has partnered with local service providers in Russia, Japan, and South Korea, who are offering their own services using the GeForce NOW technology. 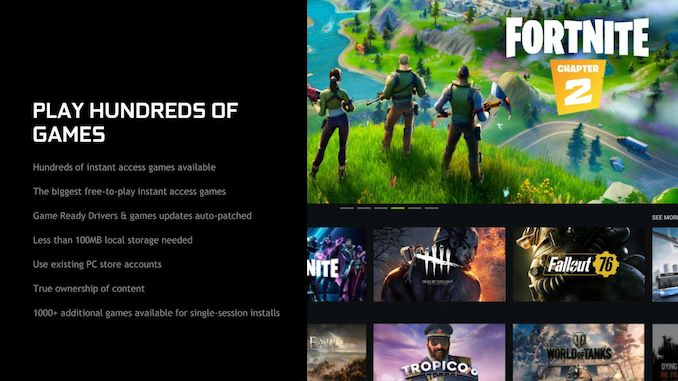 All told, NVIDIA is launching the service with support for “1000+” games. Which is a lot of games, but admittedly a fraction of what’s available via the various gaming stores out there. Besides testing and certifying games to work well on the service, the other limiting factor here appears to be licensing. NVIDIA of course is going to be quite mum on the latter, but even though they aren’t operating a game store of their own, they still need to operate within the good graces of the publishers. Which for now, at least, doesn’t include EA or Rockstar.

Overall then, NVIDIA is launching their game streaming platform at an interesting time for the industry. While NVIDIA has been developing this platform for the better part of a decade, in many ways they find themselves in the unusual position of being the underdog. Google’s Stadia may be the new kid on the block, but backed by Google enormous muscle, it’s arguably the frontrunner by being the most visible. Meanwhile Sony already has their own service, and Microsoft is ramping up their service as well. Oh, and there’s the small bit about convincing gamers that streaming games – with all of the inherent latency – is still going to be a good way to play games.

For NVIDIA then, GeForce NOW is a long time coming, but it’s definitely also a bit of gamble. So expect to see NVIDIA try to capitalize on their strengths here, both with regards to their hardware and the PC gaming platform. Even though they’re not the only PC game streaming service, NVIDIA is already the biggest and best invested, and their BYOG model is a very distinctive factor at a time when gamers are worried about game ownership. Coupled with their current GPU feature advantage, NVIDIA will certainly be able to put up a fight for the nascent game streaming market.