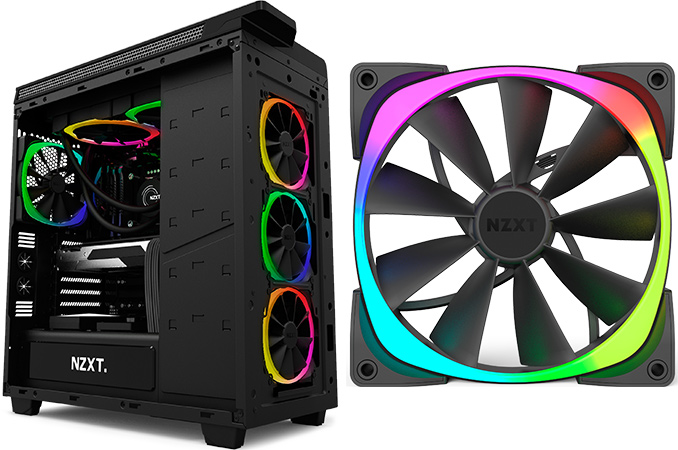 For system builders looking for a bit of extra flair, NZXT has announced a new family of computer fans with RGB LEDs, whose lighting can be customized using the company’s HUE+ hardware controller as well as CAM software. The 120- and 140-mm Aer RGB fans are designed for modders and high-end system builders, who would like to add maximum customization to their rigs and change their lighting settings on the fly.

The NZXT Aer RGB fans feature eight embedded LEDs covered with a special matte light-scattering material. The LEDs can be dynamically controlled using the NZXT CAM software when the fan is plugged to the company’s HUE+ module (sold separately). Each module can control up to five Aer RGB fans, which can be daisy chained, but still controlled separately. The CAM app and HUE+ modules support various presets for different lighting effects (breathing, pulse, fading, etc.) and allow users to create their own presents as well, which enables everyone to build highly-custom PCs while using off-the-shelf components. The new Aer RGB fans compliment NZXT’s LED strips, which can also be controlled using the HUE+.